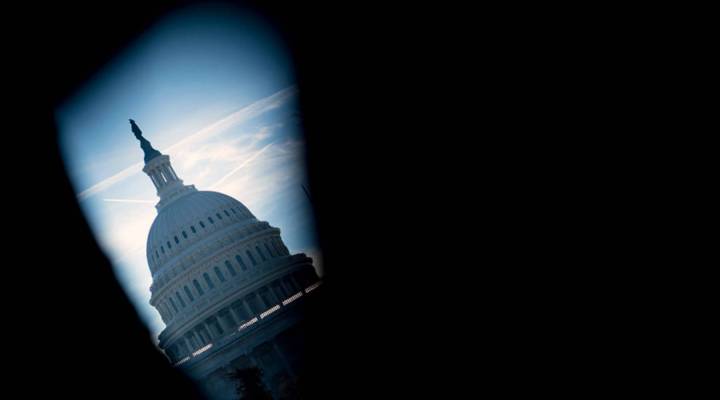 The Capitol dome is seen as lawmakers continue to work towards tax legislation on Capitol Hill on Dec. 18, 2017 in Washington, D.C. BRENDAN SMIALOWSKI/AFP/Getty Images
Listen Now

Tax incentives, which include deductions and credits, have been a long standing part of the tax code – often benefiting individuals who buy homes, get married, and have children. With the sweeping changes to the current tax code set to take effect once the bill is signed into law, things might start to look a little different. Marketplace host Kai Ryssdal talked with Marketplace correspondent Sabri Ben-Achour to discuss some of the tax incentive changes to come. The following is an edited transcript of their conversation.

Sabri Ben-Achour: Absolutely. It’s like “The Matrix,” it’s all around us. There’s actually agreement on this across the political spectrum. Examples: When your employer sets aside some of your income for retirement, that’s not taxed. Why is that? That is because the government wants you to save for retirement, so it doesn’t have to support you as much later. We see it in education. There are 529 savings accounts, savings for college — tax deductible. Why is that? Well to get more people to go to college. It helps the labor force be more competitive. Another one, is the Earned Income Tax Credit. This is a tax credit for very poor families. It’s a tax credit that gives them extra money the more they work. Why do you suppose that is? That is to get them to work more. It appeals to people who are you know concerned they might stay on welfare.

Ryssdal: Right. Some of those that you just mentioned are not without controversy shall we say. Has it always been that that the government nudges us this way or that?

Ben-Achour: Well, we’ve actually had liquor taxes since 1791, which some people wanted to discourage what they thought was socially destructive behavior. But really when you see the tax code start to be a behavioral instrument, it’s after World War II. Here is Bill Gale with the Urban Brookings Tax Policy Center:

During World War Two, the income tax was changed from what sometime’s called a class tax, that only affected a relatively few high income households, to what’s called a mass tax that affected the majority of households in the country. Obviously that was done to help finance the war effort.

Ben-Achour: So once you had a lot more people paying taxes, you had a lot more voices asking for tax breaks. But this is where I would caution people against thinking that everything in the tax code that does incentivize some behavior … was designed by some sort of “grand master of planning” of days gone by. Some of these incentives, they just kind of happened. So for example, the home mortgage interest deduction. It does incentivize home buying for Americans who can buy homes, but it didn’t start that way. This was a point that Steven Bank made to me. He teaches law at UCLA.

Ben-Achour: Yeah. Another way of thinking about this, is just think about what behaviors do these incentives reinforce. Getting married, buying a house, having kids, sending those kids to college, retiring. Is the tax code incentivizing that? Or is it just recognizing that that’s what a lot of people want to do?

Ryssdal: Yeah that’s a fair point. And you know the mortgage interest thing is interesting, because that’s going away in part now with this bill, and a lot of people are screaming about that. And so you see how that’s controversial. Let me ask you this though. The tax code as we have seen this year is just monstrously difficult to negotiate, let alone completely overhaul. Aren’t there easier ways to do what is being done here?

Ben-Achour: Yeah, for sure. But that’s the whole point. You can sneak things in through the tax code — it’s like a back door. Steven Bank again:

It’s kind of under the radar. Now, that’s odd to say. The tax bill is obviously in the news all the time. But it’s really hard for people to keep track of exactly what’s going on. There’s a lot of moving parts. It’s definitely one of those shell games you might see like on the boardwalk in Atlantic City or something like that.

Ben-Achour: So, for example let’s take the home mortgage interest deduction that we’ve just been talking about. We could instead of giving people this deduction, we could as a country just mail everyone who’s buying a house a check. That might not go over so well. This is Michael Strain, director of Economic Policy Studies at the American Enterprise Institute.

If that program had to be annually appropriated, it would not continue. If members of Congress had to take to the floor and say “yes I support giving a government subsidy to the owners of large expensive debt financed homes” they wouldn’t do it.

Ben-Achour: So his point is that you know you make something take the form of a tax deduction or tax credit, it’s easier to swallow.

Ryssdal: Yeah. Makes total sense. There’s a politics part of this thing, right? This bill was largely written by free market conservatives, Paul Ryan and Kevin Brady chief among them in the House of Representatives. They are not always wild about using government for social engineering, which is where we started. Does this bill then get us away from the tax code as social engineering?

Ben-Achour: Yes a little bit. So to go back to the home mortgage interest deduction. This bill limits the amount you can deduct. You can only deduct interest on the first $750,000 of your home. That number used to be a million. So it’s not rewarding or incentivizing home ownership of more expensive homes as much as it used to. Another way it cuts down the incentives is by raising the standard deduction. So normally, up until now, a lot of people when they do their taxes they might go itemize and they say “oh hey here’s a deduction for donating to charity, I’ll donate to charity, here’s a deduction for doing something else, I’ll do that thing.” Instead, you can just ignore all those deductions and say I’m going to do this automatic standard deduction. It’s easy. Well, that takes away the incentivizing power of certain deductions. One last one for you: it limits how much state and local taxes you can deduct and when you can’t deduct those taxes as much as you used, you become more sensitive and maybe you become less tolerant of state and local taxes. So this influences the behavior of local governments — it doesn’t make it easy anymore to spend as much and raise taxes. It makes that harder.

Ryssdal: Last thing and then I’ll let you go. There is still though a little bit of that social engineering thing that we talk about left in this bill. I mean it’s not completely gone.

Ben-Achour: Yeah, totally, totally. For example, it increase the child tax credit. So basically people who have kids get more. It allows you to deduct the money you save to put your kids through private schools, including religious schools. That is a clear incentive. That’s government approval for putting kids in private schools. One last one, is the taxes on certain types of businesses — pass-through businesses, those go way down. That creates an incentive, ideally, for people to start businesses, so that’s kind of controversial.