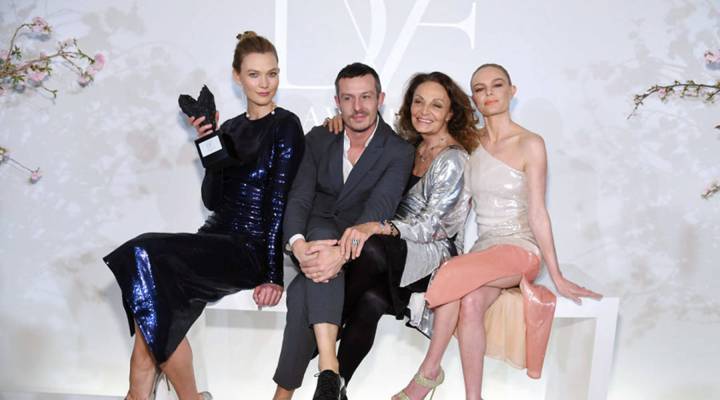 The first chief creative officer at Diane Von Furstenberg left his job today. Jonathan Saunders lasted 18 months as the venerated fashion outfit’s head designer. His two predecessors, who did not share the same title, didn’t last much longer. The company also happens to have been without a CEO since November 2016. The troubles at DVF reflect the fashion industries larger struggles. Marketplace host Kai Ryssdal spoke with fashion writer Elizabeth Holmes to get a better sense of where the industry stands. The following is an edited transcript of their conversation.

Kai Ryssdal: Eighteen months does not sound like a long time for Jonathan Saunders to have been running a major fashion house.

Elizabeth Holmes: He is the latest in a remarkable string of departures in the high-fashion world. Yes, it’s a very quick turnaround.

Ryssdal: Why is DVF specifically — I mean, they haven’t had a CEO since 2016 — but why is the fashion world having such a tough time right now?

Holmes: Well, you know, what remains to be seen is, you know, is this good for fashion, this constant churn that we’re experiencing? And I think in the pro column is definitely this constant demand for newness, something that’s new. They want something that’s fresh, they want something that gives people a reason to open their wallets and buy something that they don’t have in their closet, and a new name at a label definitely does that. The downside here is that to shoppers, it also telegraphs something when someone leaves. Right? That it’s not working. People don’t leave because it’s working. It also makes shoppers kind of uncertain, and they think, “Wait a minute, you know, this is expensive stuff. Should I hold off on buying from this brand for a little bit until they kind of figure it out?” So you know, with people like Diane or Ralph Lauren or Oscar de la Renta, finding somebody to replace them when they are the name and the face, that is a really difficult thing. And, you know, obviously there was something that was not not going well with Jonathan. And they parted ways.

Ryssdal: You know, when this story came up at our meeting this morning everybody — well not everybody — but the people who know fashion around the table said, “Listen, it’s really hard for them right now. They have to meet all these new demands, and it’s a constantly changing environment.” And I said, “Look, it’s changing for all of us, man. We’ve all got to do this.”

Holmes: I mean, yes, absolutely. I think the fashion world has the added pressure of, you know, there’s a lot of places you can spend your money right now. Fashion is competing with tech. You know, if you spent a thousand dollars on a new iPhone, you know, that’s perhaps a designer handbag that you’re not going to buy. So I think fashion is feeling competition from a lot of different places right now coupled with, I should add, the long lead times, you know. They’re working on cycles that are a year out. And so they’re trying to speed up and keep up with the times, and I think they’re feeling the pressure.

Ryssdal: Yeah, just on that speed thing. How much of a problem is it for these houses that, you know, they show something on the runway and two and a half days later, you can get it, you know, not necessarily at Ross Dress for Less, but probably Target or something?

Holmes: Well, certainly at Zara. I mean, I think that that continues to be a problem. You know, the luxury world says they need to build that anticipation, and they need that proper time to get the magazine editorials and to get on the racks and things like that. I think the shopper is increasingly less patient with that. They see something, they get excited about it, and if they’re going to buy it, they want to buy it right away. And I think there’s a reckoning that still is coming.