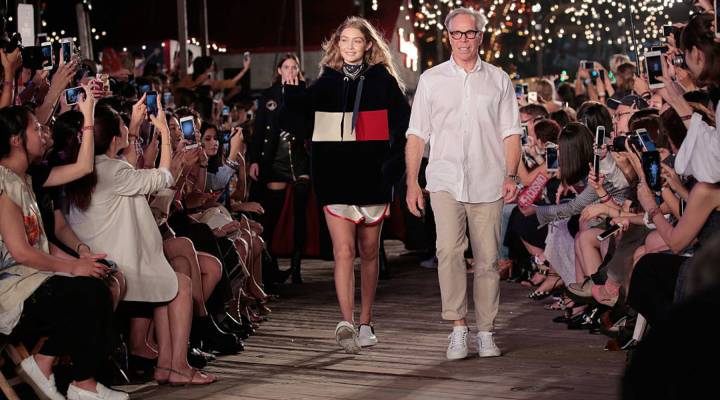 Fashion fans will know the name Alexa Chung from her career as a model. Now she is also the latest in a list of fashion models creating their own clothing lines, her new collection launched in May. Gigi Hadid, Kendall Jenner, Anine Bing and Liya Kebede are all models who have also moved toward designing. Elizabeth Holmes wrote a piece for Vogue about this trend and the advantages and difficulties models face when trying to become designers. Marketplace host Kai Ryssdal spoke to Holmes about her article. Below is an edited transcript of their conversation.

Kai Ryssdal: So these women Alexa Chung, Anine Bing, why is it so interesting in the fashion world what they’re doing?

Elizabeth Holmes: Well, you know, we’re in a serious model moment right now. Models are not just the clotheshorses that they used to be. They’re social media superstars and they have a real power. You know Alexa Chong launched her new clothing line to much fanfare. A lot of people know her and know her aesthetic. And so I think a lot of retailers and shoppers were super excited to be able to buy a piece of it.

Ryssdal: Talk to me for a minute about this phrase you used a minute ago. It’s that we’re in a “model moment.” The retail moment right now, in this country anyway, is a little tricky. It’s fine globally, but retailers in this country are having a hard time.

Holmes: Absolutely, and I would say too, a lot of these girls are starting clothes lines that are in the luxury price point, which is, you know, you’re not asking someone to spend $25 on a T-shirt. You’re asking them to spend $400 on a T-shirt.

Holmes: You know it just sort of depends. And so with the mass audience, I think there’s a little bit of a lower bar. When you’re wanting to start in the luxury realm and get the attention of those retailers, I would say if they’re going to ask shoppers to spend a thousand dollars on a leather jacket, it has to be a really good leather jacket.

Ryssdal: Yeah, it does.

Holmes: It can’t just have the model name on it.

Ryssdal: You mentioned this in your piece, Elizabeth Hurley who did it back in the 2000s someplace. These women are sort of the next generation of that, right?

Holomes: Yes, absolutely, and I would say you look at somebody like Kendall Jenner or Gigi Hadid. These girls have a real branding power behind them. They have millions of followers, and people get really excited. A lot of times what happens though is they don’t try and start their own clothing line. They look to an established design house to do a collaboration. So in the case of Gigi Hadid, she’s got a relationship with Tommy Hilfiger, and so Tommy has all that expertise and that institutional knowledge, and all Gigi has to do is say, “This is what I think is really cool right now.”

Holmes: So it’s a much easier proposition, I would say, to do a collaboration with an established design house rather than strike out on your own.

Ryssdal: You mentioned social media very quickly in passing, but it is not to be underestimated, is it?

Holmes: Absolutely not. I mean, I think a model today, they come with a mandate that they have to build their own voice and their own personality on social media. Now they have to really bring something to the table, and the design world really benefits from that, because I think the more sort of mass following, especially a high-fashion brand can have, and, you know, people will save their pennies and try and participate in that brand.

Ryssdal: But I’m not going to pay $400 for a Kendall Jenner, you know, endorsed T-shirt, right?

Holmes: Well, you might not Kai, but I think there’s a lot of women out there that would.

Ryssdal: I was speaking in the generic third person. But I guess there are.

Holmes: I think that people want to feel closer to these girls. There’s something about Instagram that’s super intimate, right? You feel like you’re getting a peek into their real lives. It feels, I hate this word, but it feels really authentic even though a lot of these photos are super posed and, you know, carefully planned. Again when they put out a picture and say, “Hey this is my new jacket!” you know, maybe you want to buy and people say, “Maybe I do.” You know? I mean it’s so much different than watching a television commercial or even seeing an ad in a glossy magazine.