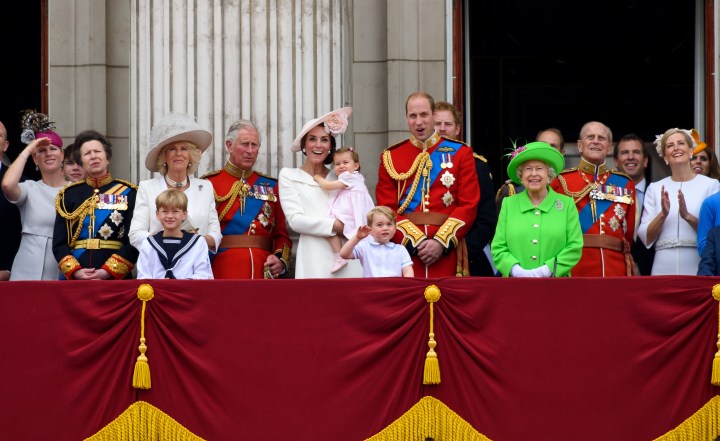 Netflix released the newest season of “The Crown” this weekend, featuring a fictionalized Princess Diana and some of her most iconic fashion moments. Royal fashion is also the subject of Elizabeth Holmes‘ new book “HRH: So Many Thoughts on Royal Style.” “Marketplace” host Kai Ryssdal spoke with Holmes about sartorial messaging and economic power of royal fashion. The following is an excerpt from the book.

Before she met Harry, Meghan was a humanitarian and gender-equality activist, traveling to India to destigmatize menstrual health as a global ambassador for World Vision, and speaking at the One Young World Summit as a counselor for the organization that supports young leaders. The royal platform, and its dedication to charity work, was a natural continuation of her work—and she dove right in. Meghan became a patron of four charities and vice president of the Queen’s Commonwealth Trust. Some of the projects I admired most benefited local British organizations while giving her fans around the world a chance to participate, too. Her embrace of the Muslim women at the Hubb Community Kitchen, started in the wake of the 2017 Grenfell Tower fire, led to Together: Our Community Cookbook, a New York Times bestseller. She became patron of Smart Works, which helps outfit women in the U.K. for job interviews, and pulled together four brands to launch a capsule collection of wardrobe staples. For every piece a shopper bought from the collection, one was donated to Smart Works; within just eight days, the effort supplied the charity with a year’s worth of clothes. Meghan also guest-edited the September 2019 issue of British Vogue, the fastest-selling in its history. “This issue is about the power of the collective,” Meghan wrote in her editor’s letter. “You will find that spirit of inclusivity on the cover: diverse portraiture of women of varying age, colour, creed, nationality and life experience, and of unquestionable inspiration.”

What’s more, she did a lot of this while pregnant, and as a brand-new mom, after giving birth to Archie Harrison Mountbatten-Windsor in May of that year.

Throughout it all, Meghan had the entire fashion world—quite literally every brand on the planet—at her disposal. Her fashion choices show what a tantalizing, overwhelming, and empowering opportunity that would be. Meghan is said to style herself although she is close friends with Jessica Mulroney, the Toronto-based stylist and television personality, as well as the daughter-in-law of the former Canadian prime minister (and perhaps the reason behind so many Canadian brands in Meghan’s rotation).

Aside from some early work with Givenchy, Meghan eschewed the Queen’s strategy of relying on a few trusted brands. She spread the designer love and economic benefit around, wearing big names and small. Her fans delighted in the range, thrilled at the fanciest of full-princess moments. Meghan’s critics, however, demanded frugality.

After accusations of leading a lavish lifestyle peaked in the summer of 2019, with an appearance at designer friend Misha Nonoo’s wedding in an expensive Valentino gown, Meghan crafted a brilliant response for the couple’s ten-day tour of Southern Africa that fall. Her wardrobe was overwhelmingly affordable and casual. She opted for dresses from small or mass-market brands; four of the eleven outfits she wore for public appearances were repeats. The strategy worked. Coverage of the tour was almost universally positive, focused on the causes championed by both the couple and the locals they visited.

The relatable royal also allowed for a deeper connection with fans. A beautiful Givenchy gown is fun to look at, but a chicly styled J.Crew denim dress will send people on a shopping frenzy. That economic power is familiar—remember the “Kate Effect”? But Meghan’s bent toward a more minimal style suggested something different, and deeper, to me. Take the black jeans by Australian brand Outland Denim she wore while touring that country in the fall of 2018. A strong show of sartorial diplomacy, yes, but with an underlying female empowerment message, too. The brand employs young women who were victims of exploitation or trafficking and was able to hire as many as thirty more women in its Cambodian production facility because of the increased sales brought on by the duchess. If someone wanted simply to dress like Meghan, they could wear any pair of black jeans. But royal fans wanted those black jeans from that Australian brand. They wanted a piece of what the duchess supports.

From “HRH: So Many Thoughts on Royal Style” by Elizabeth Holmes. Copyright (c) 2020 by the author and reprinted by permission of Celadon Books, a division of Macmillan Publishing Group, LLC.