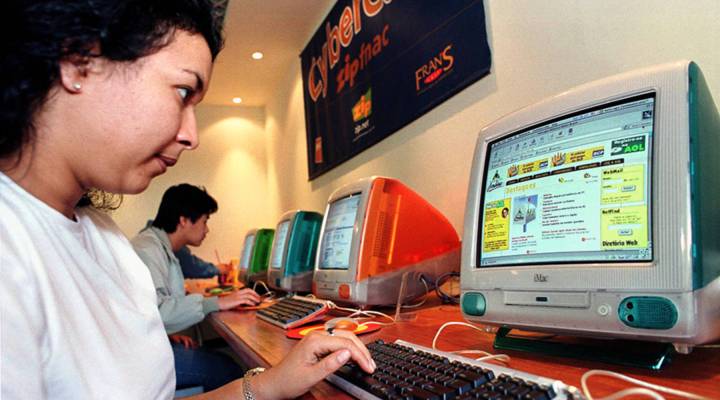 COPY
A Brazilian woman logs onto AOL at a cybercafe in Sao Paulo in 1999. MARIE HIPPENMEYER/AFP/Getty Images

A Brazilian woman logs onto AOL at a cybercafe in Sao Paulo in 1999. MARIE HIPPENMEYER/AFP/Getty Images
Listen Now

Under my bed, I have a box stuffed with high school memories, including a bright orange binder, labeled “Warning, this is not school-related.”

Inside, there are pages and pages of deeply meaningful conversations I had on AOL Instant Messenger, full of gossip, flirting and those tortured goodbyes. Like this one:

In the early 2000s, AIM already had more than 36 million active users. Many of them were angst-ridden teenagers, unwittingly committing their first act of personal branding —picking a screen name. There was Dancechick3871, Baseballguy42, BeachBabeXOX.

Twenty years after its inception, AOL Instant Messenger will officially sign off on today. There aren’t many 20- and 30-something-year-olds who are still loyal to the service. In fact, most people probably think it died long ago. But not Barry Appelman. He’s been logging into AIM to chat with his friends nearly every day for the past 20 years.

You could say Appelman was one of AIM’s earliest adopters. He helped invent it.

Back in the ’90s, Appelman worked at AOL as a manger in development. He was the guy behind the buddy list — you know, that thing that told people which of their friends were online. But chatting on AOL back then was clunky and took a lot of effort. Appelman wanted to make it easier for AOL subscribers.

“I sort of put my thoughts on paper and said, ‘We need to do this as a stand-alone product for the internet,’” Appelman said.

So, along with a small team, he started designing an instant messaging service. Behind closed doors. AOL didn’t know about it.

“We built this in secret, in development, telling no one,” he said.

And when AIM was introduced in 1997, it was with little fanfare and the company didn’t embrace the service. Appelman said back then, offering a free messaging service, rather than a paid subscription, was considered less than a solid business idea.

“There are very few people willing to say, ‘Oh, we should embrace this and toss all that old stuff that’s making us money,’” he said. “At the time, AOL’s revenue and business model depended on people subscribing.”

Even after AIM exploded, after everyone from Wall Street traders to 10th graders were using it, Appelman said AOL didn’t make AIM a priority. His team tried to find ways to monetize the service, but advertising never really took off. Meanwhile, AOL itself was starting what would be its own long decline.

But like so many tech pioneers, AIM helped set the stage for the companies that would eventually surpass it, said Karen North, a professor of digital social media at the University of Southern California.

“For example, they had a news ticker and stock tickers, they had the ability to do talk or do voice before Skype, they had file sharing for music,” she said.

Instant messaging was like the prep course for expressing yourself online. It’s where Soccerdude58, aka Patrick Duplessis, asked out his first girlfriend — in elementary school.

“I was just so excited by her response because she said yes that I printed out the conversation and brought it to school and showed all my friends,” he said.

It’s why no one in Beachbabexox’s house could get a phone call in edgewise. Dial-up was the thing back then and Gabrielle Carullo was always logged on.

And it’s where Kate Cella, also known as XOXODance9312, mastered the art of an away message.

With AIM permanently going away, “I feel, like, a little break in my heart, like a childhood loss or something,” she said.