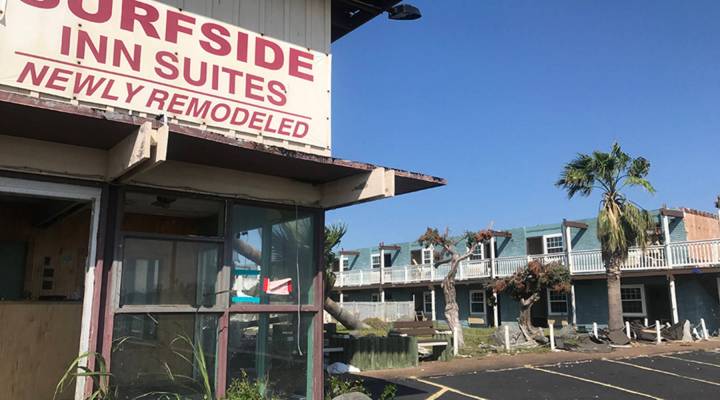 COPY
Hotel rooms are few and far between in Rockport, Texas. Many people who received FEMA money for housing are using it to rent homes or hotel rooms in Corpus Christi, 30 miles away. Andy Uhler/Marketplace

Hotel rooms are few and far between in Rockport, Texas. Many people who received FEMA money for housing are using it to rent homes or hotel rooms in Corpus Christi, 30 miles away. Andy Uhler/Marketplace
Listen Now

This year’s Atlantic hurricane season is billed as the most expensive in U.S. history. Estimates vary depending on who’s measuring the costs and over what period of time, but we’re talking up to $400 billion in damages between Harvey, Irma and Maria. Millions of homes were damaged or destroyed. In Rockport, Texas, some estimate 80 percent of the homes and buildings were wiped out. So where do residents there live while the town picks up the pieces?

Angela Trevenio, her two young kids and her husband are living in their storm-damaged house, but they’re confined to just the living room because mold has started to grow in their bedrooms. She knows it’s a health risk, but when she applied for Federal Emergency Management Agency assistance to pay for a different place to live, she said the plea fell on deaf ears.

“I was not granted temporary housing, nor was I approved for that $400 through Red Cross,” she explained, “as many times as I’ve tried.”

FEMA representatives said Trevenio should keep appealing, but she said she’s done with it. Even if she was given money to get a hotel room or a short-term rental, there are few options in Rockport.

“If you applied for FEMA, you know that when you called the number, they said, ‘Yeah, we can place you, but we’re going to place you in San Antonio,’” said Kristen Barnebey, Rockport’s district attorney and Trevenio’s boss.

Barnebey said it’s bad enough her office had to move out of the flooded city hall to an old motorcycle shop. She’s not going to ask her staff to commute from San Antonio, more than 150 miles away.

Up to a third of the town’s residents are now living elsewhere.

Rockport is a tourist town. People spend their weekends here and pay for vacation rentals, fishing trips and weddings on the beach. But right now, there’s nowhere to stay.

“When we first got started, I had nine cooks,” he said, sitting in a booth, looking out at the Gulf of Mexico. “The storm hit, I came back and I had five. So I lost four of them and it was only because of no place to live.”

When those cooks and workers like them move away, it shrinks the tax base.

Rockport’s mayor, C.J. Wax, said the smaller tax base is already hurting how he pays for police, fire and waste collection.

“If you have a place to put your workforce, then you have availability of people to assist the businesses that are reopening and then can contribute to the economic recovery of the community,” Wax said. He knows his town’s recovery depends on temporary housing so people can rebuild permanent homes.

“If my house was blown away this year and I got a tax statement, I’d say, ‘I’m not paying my taxes, I don’t have a house,'” he said. “What are you going to do?”

But for Rockport, economic health is not just about property and sales taxes. Rockport is a tourist town. People spend their weekends here and pay for vacation rentals, fishing trips and weddings on the beach.

“Our economy is in the toilet because our hotel-motel tax is gone and our venue tax is gone,” Mills said.

It was taking so long to get temporary housing options into the area that the state brought in 30 pre-fab homes for FEMA to distribute to storm victims. That led to a new kind of housing solution where FEMA owns the units, but a Texas agency is, essentially, the landlord.

“This is the first of its kind for FEMA,” said Robert Howard, a FEMA spokesperson. He said it used to be that FEMA staff would check in on things like updating each family’s rebuilding progress or making sure the unit wasn’t damaged. Now the Texas General Land Office takes care of that.

“This really is a state-administered, locally managed program,” Howard said. “And we’re just kind of the oil that’s greasing that wheel to make that happen.”

Residents in Rockport are thankful for any attempt at a housing solution, but many argued these housing units should have been brought in months ago.

“I know it’s frustrating for people because it’s not happening yesterday,” said Pete Phillips, who oversees the partnership at the Texas General Land Office. “But to the greatest extent possible we will speed up the process and continue. But we don’t want to take shortcuts where people are impacted again.”

Phillips knows if the state doesn’t do this right, dot all the bureaucratic i’s and cross all the t’s, the General Land Office could wind up owing FEMA money. Or even worse, Texas residents could be handed a bill by the feds for their temporary housing.