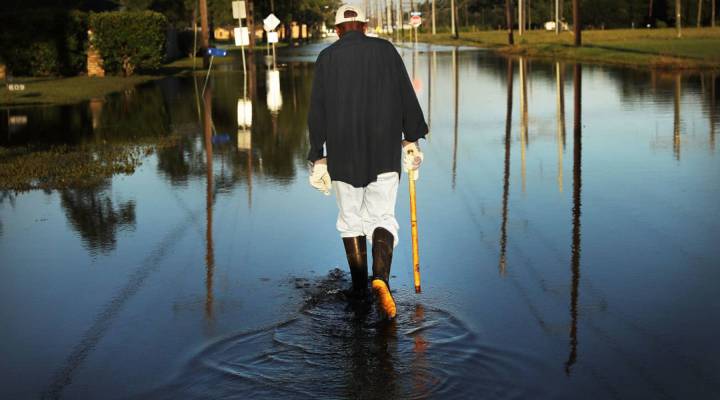 The U.S. shed 33,000 jobs in September because of Hurricanes Harvey and Irma, which closed thousands of businesses in Texas and Florida and forced widespread evacuations. It marked the first monthly hiring decline in nearly seven years.

Economists expected the economy to add about 90,000 jobs last month.

The unemployment rate fell to 4.2 percent from 4.4 percent, the Labor Department said Friday, the lowest level since February 2001 and a sign that the job market remains fundamentally solid. Hiring is expected to rebound in the coming months as businesses in the area reopen and construction companies ramp up repair and renovation work.

Last month’s drop was driven by huge losses in restaurants and bars, which shed 105,000 jobs, a sign of the damage to Florida’s tourism industry. Roughly 1.5 million people were unable to work last month because of the weather, the government said, the most in 20 years.

Hourly workers who couldn’t work and missed a paycheck would have been counted as not working, thereby lowering September’s job total. That’s true even if those employees returned to work after the storm passed or will return.

The unemployment rate fell because it is calculated with a separate survey of households. That survey counted people as employed even if they were temporarily off work because of the storms. In fact, the proportion of adults who have jobs rose to 60.4 percent, the highest since January 2009.

The number of jobs created in the previous two months — July and August — was also revised down by a combined 38,000.

“The weakness in payrolls was likely because of temporary hurricane effects. Other parts of the report were much stronger than expected,” wrote Jim O’Sullivan, chief U.S. economist at High Frequency Economics.

Average hourly wages rose a healthy 2.9 percent from 12 months earlier. Still, the government said that figure was artificially inflated by the loss of so many lower-paid workers in hurricane-hit areas. The result was that higher-paid workers disproportionately boosted the wage figure.

More than 11 million people had been employed in the 87 counties in Texas and Florida that were declared disaster areas, the government says. That’s equal to about 7.7 percent of the nation’s workforce.

Other recent indicators point to a solid economy and job market. This week, a survey of services firms — covering restaurants, construction companies, retail stores, banks and others — found that they expanded in September at their fastest monthly pace since 2005. That followed a survey of manufacturers, which found an equally strong gain. Factory activity expanded at the fastest pace in more than 13 years.

Some signs suggest that a rebound from the hurricanes is already boosting the economy. Auto sales, which had been lackluster this year, jumped 6.1 percent to more than 1.5 million in September from a year ago, according to Autodata Corp., as Americans began to replace cars destroyed by the storms. That increase in purchases should soon lead automakers to step up production.

Harvey caused about $76 billion to $87 billion in economic losses, according to Moody’s Analytics, an economic consulting firm. The estimate includes damage to homes and businesses as well as lost business and economic output. That calculation would make Harvey the second-worst U.S. natural disaster, after Hurricane Katrina in 2005.

Irma will likely end up having caused $58 billion to $83 billion in economic losses, Moody’s forecasts. Maria, which hammered Puerto Rico and the U.S. Virgin Islands, could cost $45 billion to $95 billion, though that is a preliminary estimate.

As the affected areas begin to recover from the damage caused by the recent hurricanes, future job reports could see a jump in construction jobs, according to Lawrence Yu, chief economist at the National Association of Realtors.

“Construction jobs, which did not change much in the latest month, will need to increase rapidly in order to relieve the housing shortage facing the country,” he said. “But in the short term, there will be fewer construction workers building new homes, especially since some will be diverted to rebuilding areas impacted by the hurricanes. Unfortunately, housing shortages will last longer and home prices will no doubt continue to outpace wage growth for the foreseeable future.”

Marketplace staff contributed to this report.