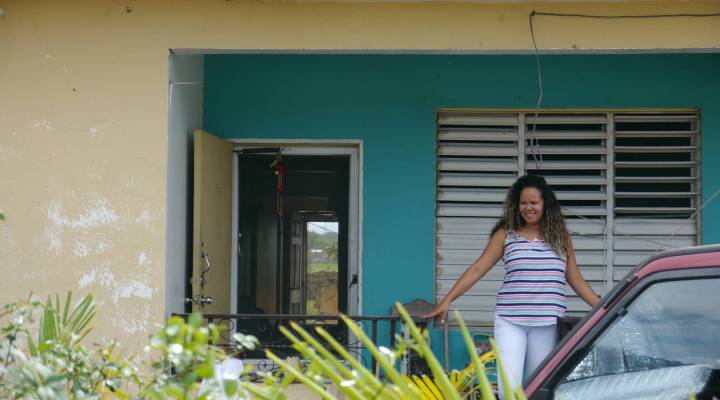 On Puerto Rico’s north coast is a town called Hatillo. At this time of year, the fields are lush green, the air is thick, and humid. It’s the middle of the day and cars drive slowly through the neighborhoods, along roads with electricity poles leaning at a 45 degree angle, holding power lines that drape into U-shapes in front of people’s homes, for as far as the eye can see.

Glorimar Rivera is sitting on her front porch with her grandmother under some shade, trying to keep cool from the heat. The second floor of her house is in the middle of renovations that started before Hurricane Maria – open with unpainted bricks and no glass in the windows yet.

Rivera rode out Hurricane Maria in her home with her 4-year-old son, her mother, and grandmother.

“The first two hours, the wind was infernal,” Rivera recalled about Hurricane Maria. “But then it was calm for about an hour. We came outside because we thought it was over, but that’s when it got worse.”

Rivera, 32, said she has been in Puerto Rico all of her life. She experienced Hurricane Hugo in 1989 and Hurricane Georges in 1998, but Hurricane Maria is incomparable.

“That was horrible. It’s an experience that I don’t ever want to live through again,” she said.

Rivera’s home got its water back around four weeks ago, but still does not have power.

“There’s no power so we have to keep buying ice to keep things cold, like meat or milk,” said Rivera.

One of her main concerns for her family, and the people of Puerto Rico, is the lack of medical aid.

“Things like Tussin, medications, because right now everyone has allergies, everyone has a cold,” said Rivera. “There are a lot of mosquitoes.”

Rivera works at a 24-hour Walmart in Hatillo. The store suffered its own losses after Maria – ruined meats, damaged stock – and was closed for about a month. Even though the doors are now open, Rivera says there’s not enough work for everyone. She’s only worked a handful of three or four hour shifts since.

But even with few signs of things returning to normal any time soon, and without much work to pay bills, Rivera would rather rebuild her life on the island, than start anew on the mainland.

“So, for the time now, I’m going to stay here with my family.” said Rivera. “The warmth of my family doesn’t compare with leaving and venturing out.”