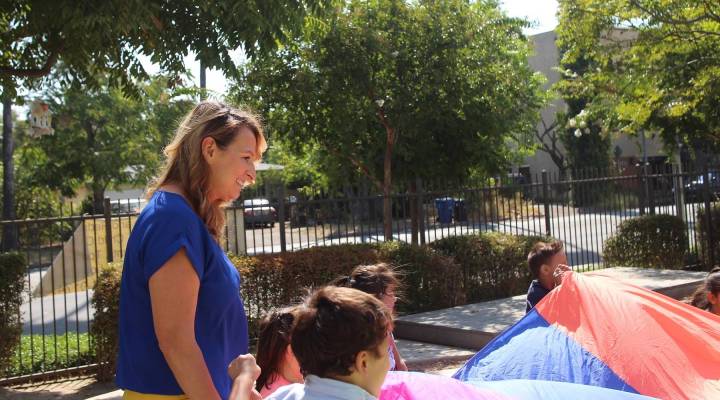 COPY
Selma Sanchez, program director of the Child Development Consortium of Los Angeles, oversees ten child care centers. When the majority of staff at this Canoga Park center left for other jobs, she stepped in to pick up the slack. Priska Neely/ for Marketplace

Selma Sanchez, program director of the Child Development Consortium of Los Angeles, oversees ten child care centers. When the majority of staff at this Canoga Park center left for other jobs, she stepped in to pick up the slack. Priska Neely/ for Marketplace
Listen Now

Selma Sanchez spent the summer in a hiring frenzy. She’s the program director of the Child Development Consortium of Los Angeles, and at one of the preschool sites, almost all of the jobs needed to be filled.

“In July we lost our director,” Sanchez said. “June and July – we lost three teachers.” Most of the staff went to work at a Head Start center that’s opened nearby. That federally-funded preschool program pays slightly better than the $20 per hour she can offer at her state-subsidized program.

“I’ve been interviewing like crazy,” said Sanchez. “We can’t compete with salaries.”

She can’t find candidates with bachelor’s and master’s degrees who will settle for that rate. One of the last teachers Sanchez hired had never taken a child development class.

“She had like over five years of experience, but no education, and that’s who we hired,” she said. “That’s all I could get.”

High turnover rates are familiar territory for early education providers and finding qualified candidates is often a challenges. Wages and benefits for child care workers are among the lowest of any profession in the country and many preschool teachers don’t earn a living wage. Nearly half of child care workers and a third of preschool and kindergarten teachers are using some form of federal income support.

“TK has been affecting us since they started,” Sanchez said.

Those who are paid to care for and educate little kids make vastly different amounts of money depending on the funding stream for the program and the age of the children. If early childhood education is a food chain, transitional kindergarten is the new big fish and it’s gobbling up a lot of the resources – including qualified teachers.

Transitional kindergarten teachers, who must have bachelor’s degrees and teaching credentials, are paid like grade school educators, who make between $52,000 – $56,000 on average. Head Start is a federally funded program that is requiring more teachers to have bachelor’s degrees, but still pays an average annual salary of $35,776.

“Many of our teachers move into the district systems because they do pay more,” said Keesha Woods, executive director for the LA County Office of Education Head Start and Early Learning program.

As Head Start teachers get the qualifications to move to transitional kindergarten jobs, Head Start programs are scrambling to fill positions. And where do they look? Woods said in many instances, “unfortunately, we recruit them from other providers that [are] paying lower salaries.”

Nationwide, as more school districts step in to provide education for kids under five, more teachers are making this leap. It’s a ripple effect, leaving programs like CDCLA, where the majority of slots are subsidized by the state, with few candidates who have an education in child development. Since the field pays so little, many can’t afford higher education.

“People who are trying to run these programs are tearing their hair out,” said Marcy Whitebook, who runs the Center for the Study of Child Care Employment at the University of California, Berkeley.

“You could say this was an unintended consequence, but it was actually a very predictable consequence,” Whitebook said. “When people with the same qualifications are being paid dramatically different salaries, based on the funding stream and the age of the children, of course you’re gonna see this movement.”

Stephanie Guerrero is looking to make the move. She’s a site supervisor at a preschool in Glendale where she’s worked for five years. “I love what I do,” said Guerrero, “I was born to work with kids, that’s what I was made for.” But she only earns around $38,000 a year and has trouble paying all of her bills.

“When you don’t get paid enough, you start to feel like, what am I doing here?” Guerrero said. So, she’s been working to make a move to transitional kindergarten. She’s spent the last two years working toward her teaching credential, taking on more debt all the while. “I could teach TK and probably make like double what I’m making now,” she said.

More and more states are investing in early childhood programs. A growing body of research on early brain development shows these programs help children succeed later in life. That, in turn, has increased the demand for qualified teachers. But, for now, getting a bachelor’s degree in early childhood education has the lowest projected earnings for any college major.

“If the science says the brain is most sensitive in these early years, and if we know every community has child care centers, and if we can be reasonably assured the robots are not gonna take over this area of work, then why aren’t we making this a middle-class job?” Whitebook said.

Several states and cities –including West Virginia, Oregon and San Antonio – are working toward creating parity between preschool and K-12 educators.  But in California, the gap persists and without change, providers say the shortage of preschool educators will only get worse.

This article was first published by KPCC.