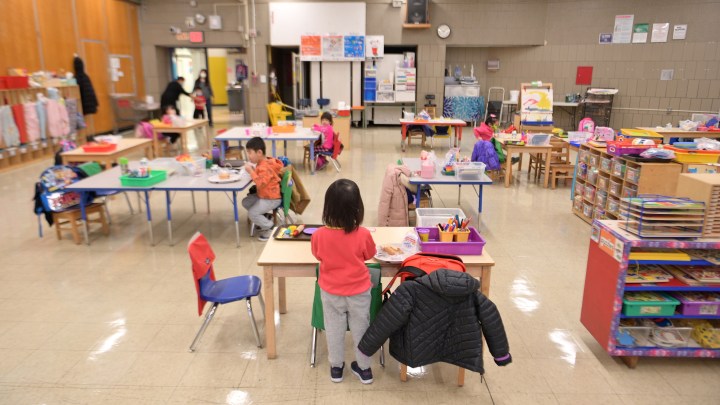 Publicly funded preschool has been around for years in some U.S. cities — like Boston, which started its program in the late ’90s, and Washington, D.C., which started offering pre-K in the 1960s.

The proposal would provide up to two years of free preschool for kids before they start kindergarten. For many 3- and 4-year-olds, pre-K is the real start to their education.

“She was excited to learn,” Jimenez said. “She’s excited to go to school, and she came home and would talk about it, which is not something that ever happened in day care.”

Jimenez said that day care center cost her $350 a week.

Supporters of pre-K also say it could relieve economic stress for families. Joshiam Rojas, another parent at that same New Jersey school, said that if it wasn’t free, she probably wouldn’t be able to send her son.

“I will not be able to do it. Because that is not only him. I have another three,” Rojas said. Another three kids who are teenagers and thinking about college.

Chris Walters, an economics professor at the University of California, Berkeley, compared students who attended preschool with those who didn’t 20 years later.

“What we found is that attending public preschool in Boston increased on-time college attendance by 18%,” he said.

So, pre-K has both immediate and future benefits — but it’s costly.

“The primary reason we don’t already have it is that it’s expensive,” said Steve Barnett, who co-directs the National Institute for Early Education Research at Rutgers University.

He said a national program would cost about $60 billion a year. Still, the fact that it’s made it into the budget proposal is a good sign, Barnett said.