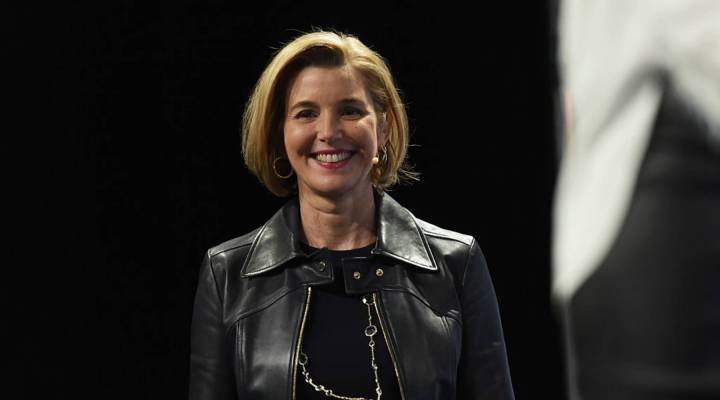 We last spoke with Sallie Krawcheck back in February about her book, which is part memoir, part how to succeed as a woman in corporate America. Krawcheck is one of the most experienced women in finance, and she left Wall Street after the financial crisis and went on to found Ellevest, a digital investment platform for women.

During her Marketplace interview, Krawcheck recounted an early — and graphic — experience of sexual harassment.

“I tell you, it’s really interesting when there’s a Xerox copy of male genitalia on your desk,” Krawcheck said. “It takes you a minute to realize what it is.”

That wasn’t the last time Krawcheck experienced harassment. She recounted another episode in a #MeToo blog post from October, following the firing of Harvey Weinstein after multiple sexual harassment allegations. Marketplace host Kai Ryssdal called up Krawcheck to better understand how this moment is playing out on Wall Street. The following is an edited transcript of their conversation.

Kai Ryssdal: You were young and inexperienced when [the Xerox incident] happened. You didn’t know what to do. That was not the last time, though, that you had uncomfortable experiences in your professional career.

Sallie Krawcheck: Not even close.

Ryssdal: And in point of fact, it came, as you wrote in your post, when you were older and had a lot of power. Or more power, anyway.

Krawcheck: Yeah. And that’s what a difference is between where I was fortunate enough to be, and some of these young women we’re hearing about in Silicon Valley and Hollywood, that they were preyed upon when they were trying to make it in their industry and hadn’t had a level of success. Happily for me, when I had a very senior, very well-known, powerful individual make a pass at me, he wasn’t my boss. So this was at the Sanford Bernstein Strategic Decisions Conference. I was the director of research. I went up afterwards to this very well-known, powerful individual. Thanked him for joining us, and he turned to me and said, “Would you like to come up to my hotel room?” And then [made an obscene gesture with his mouth]. I can’t imagine that worked very well for many people. But happily, I was in a position where I could say no to him, and he could not impact my job. Even more happily, several years later, when I was the chief financial officer of Citigroup, our CEO wanted to offer him a job there.

Ryssdal: This guy, the same guy?

Ryssdal: You made a point of not naming him. And I wonder why?

Krawcheck: I thought about it a lot. I spent the entire weekend that I wrote this piece thinking about should I or shouldn’t I. And the reason I decided not to is, he is not in a position where he can lord that over other individuals, and as a result of that I thought, you know what? Not this guy, not right now.

Ryssdal: We’re having this moment, I guess, all of us, based on some things that happened in Hollywood. We’re having a moment here in public radio, as I’m sure a lot of our listeners have heard. Where is the equivalent moment going to be on Wall Street, which is as sexist and as difficult for women as almost any place else on this planet?

Krawcheck: Well, we’ve been having it. Somehow we seem to have forgotten that, you know, a hundred-plus million dollars was paid out at Smith Barney in the ’90s for the Boom-Boom Room. I keep hearing from everybody, “Where’s Wall Street’s Harvey Weinstein?” And I don’t know that we’re going to see one. And I think the reason is because a Harvey Weinstein could tell young women, “I can make you or break you.” For Wall Street, it’s sort of like, “I’ll give you the best trades” or “I’ll put you on the best deal.” You know, I’m not sure there was the equivalent. Now, I may be completely wrong and next week we may read about somebody else.

Ryssdal: What’s it going to take, then, for things to substantively change on Wall Street?

Krawcheck: Oh, my gosh. Well first of all, it’s changing, because women are saying, “I’m sick of this, beep.” And I am going to begin to talk about it. Just a few years ago, Ellen Pao sued Kleiner Perkins for a hostile work environment. And everybody, men and women, just stepped back. And today people are instead leaning towards this, and amplifying these voices and supporting them. So I think the change isn’t coming and has never come from the CEOs and the boards, [who] are, all of a sudden, going to decide to really look into this. I think it’s coming ground up from women who are just sick of this stuff.