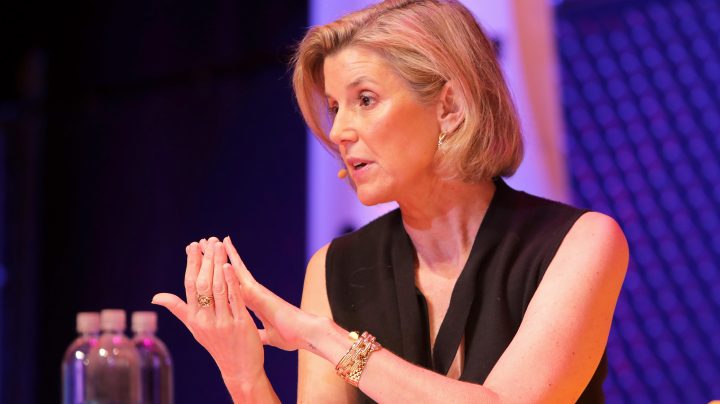 COPY
"It's exactly someone like me who should be using my privilege ... in order to build this," Sallie Krawcheck says of Ellevest, her digital financial company for women. Rachel Murray/Getty Images

"It's exactly someone like me who should be using my privilege ... in order to build this," Sallie Krawcheck says of Ellevest, her digital financial company for women. Rachel Murray/Getty Images
Listen Now

Manhattan’s Upper West Side has become Sallie Krawcheck’s workspace in addition to her neighborhood. Krawcheck, known as one of the highest-ranking women on Wall Street from positions at Bank of America and Citigroup, is the CEO of Ellevest, a digital financial company for women that she co-founded in 2014.

Krawcheck spoke with “Marketplace” host Kai Ryssdal outside a coffee and juice restaurant in New York City last week. The following is an edited transcript of their conversation.

Kai Ryssdal: So first of all, thank you for taking time. And second of all, we should explain why we’re sitting out here on the Upper West Side outside at a juice place instead of in your offices.

Sallie Krawcheck: Because we no longer have any offices, that’s why.

Ryssdal: Did the pandemic do it for you?

Ryssdal: Which is kind of amazing still that you’re a startup with, you know, a billion something under management, right? You’re doing well.

Krawcheck: A billion two. We’re doing well. We’re not yet profitable, so I think that makes it still a startup. But no, when, you know, you’re going through the pandemic and your employees are scattering everywhere, as they should, we thought, “Why am I gonna pay 50,000 bucks for an office when the lease is up, and we can figure it out on the other side?”

Ryssdal: So look, let’s talk about what you’re trying to do with this business now, 18 months after it all. Because when we first spoke on “Marketplace” four years ago, Ellevest was even more of a startup and you were trying to lay things out. Now, it seems with the way women have fared in this pandemic — which is not really well at all — maybe you’re even more mission-driven, if that makes sense?

Krawcheck: Oh my gosh, and more important. So we have a lot of discussion in this country about the gender pay gap, which is important. What we don’t talk often enough about is the more important gender wealth gap. So if pay is what you bring in, wealth is what you have and keep. Before the pandemic, 32 cents to a white man’s dollar; one penny for Black women. It was going in the wrong direction already. It went further in the wrong direction during the pandemic. And that’s what Ellevest is squarely focused on: How can we close the gender wealth gap?

Ryssdal: And it’s worse now. So the question is, how much ground do you think women lost in the past 18 months? They lost more than 18 months’ worth of ground, right?

Krawcheck: Oh, for sure they did. By some measures, they lost decades of ground. And the comment of the pandemic for me that captured it was by Jessica Calarco, who’s a sociologist, that what we learned during the pandemic is other countries have social safety nets. The U.S. has women. And so they disproportionately lost their jobs. They disproportionately left their jobs because they felt forced to, and they’re missing out on promotions.

Ryssdal: So what do you do as you’re trying to fix this problem that’s more than just getting women into mutual funds and buying a couple of stocks here and there?

“Money is women’s No. 1 source of stress”

Krawcheck: Yeah. So first of all, money is women’s No. 1 source of stress. Taking action around it is the No. 1 driver of our confidence in our future. So this is important stuff even beyond the money. So what you do is you control what you can control. Are they paying off their debt in the right order? Are they getting the advice they need to go for that raise at work?

Ryssdal: So I’m going to trust that you’ll take this question in the spirit with which it’s intended. Well, a lot of the women you’re trying to help are going to look at you and say, “Come on, you’re a white lady from the Upper East” — well, Upper West Side. Sorry, I know they’re different. New Yorkers are very particular about that. “But you’re a rich, white lady from the Upper West Side. What do you know about my problems?”

Krawcheck: Well, that’s why the team is so important, that we have a team that reflects, as we call her, Elle. And by the way, we also do a ton of research in order to determine what we do next, which is why we’ve ended up out of investing only, because our community said to us, “This is what we want.” And by the way, it’s exactly someone like me who should be using my privilege. That I have had a decadeslong career on Wall Street, I know the people who’ve got the money to fund this. If I were to say, “Hey, I’m a white woman on the Upper West Side, let me go to the beach, shame on me.” I need to use my privilege in order to build this.

Ryssdal: So it’s been, you know, give or take five years since we had you on “Marketplace.” I guess the question for me now is if we come to you in another five years, where is this company?

Krawcheck: Who knows? It depends on where she takes us. Of course, I hope we are much bigger. But we define our mission as very clear to get more money in the hands of women.

Ryssdal: Is money the only answer?

Krawcheck: We do live in a capitalist society.

Ryssdal: We do indeed.

Krawcheck: And it’s not the only answer. But you tell me if you can envision a world in which women are fully equal with men if they are not financially equal with men. Today, there are way too many women stuck in a job they hate because they can’t afford to quit, not able to start the business they want because they can’t afford to do it. And by the way, there’s actually very little relationship abuse, domestic abuse without financial abuse.

Ryssdal: Really, what you’re saying is that on almost every level capitalism doesn’t work for women, right?

Krawcheck: We’d have to think about every level, but it doesn’t work for women. And we’ve also internalized so many of the messages of capitalism, which is that the money belongs to the men. Now, what? Come on, Sallie, that’s not true. Do you know that today 90% of articles for women on money are about saving and are negative. And 72% of articles for men on money are about investing and growing. And so she receives these messages her whole life that gaslight her. Forget about the gender pay gap over there. You just should not be buying that latte. You should invest that money, and that facial is frivolous. You know, we all just internalize it.