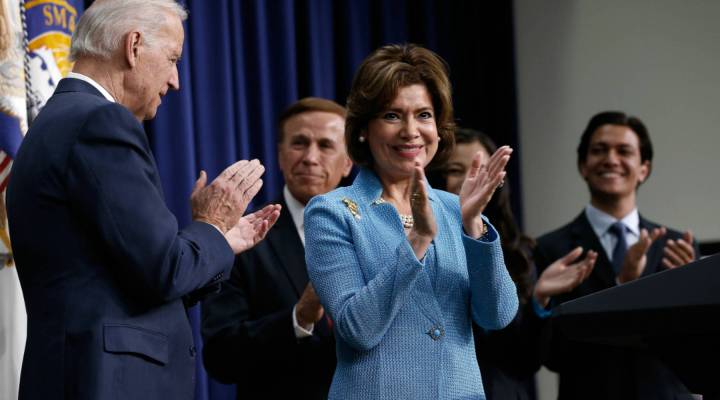 COPY
Maria Contreras-Sweet at her ceremony to be sworn in as head of the Small Business Administration. Win McNamee/Getty Images

Maria Contreras-Sweet at her ceremony to be sworn in as head of the Small Business Administration. Win McNamee/Getty Images
Listen Now

The movie studio The Weinstein Co., has seen its value plummet after numerous allegations of sexual abuse by its co-founder Harvey Weinstein.

It’s been looking for a buyer, and now it appears to have at least one offer. Maria Contreras-Sweet — the head of the Small Business Administration under President Barack Obama — has brought together a group of investors that’s offering $275 million for the embattled movie studio.

Contreras-Sweet has considerable financial expertise — she founded a bank and currently sits on the board of Sempra Energy. However, she has no experience with media.

Her plan for the company calls for it to continue much of its day-to-day operations, keeping most, if not all, the employees and having them turn out movies and TV shows, according to the Wall Street Journal which reviewed the letter she sent to the studio’s board of directors.

Other potential bids have largely focused on acquiring the studio’s film library and TV rights.

The offered plan makes way for a potential revamping of the studio’s tarnished image. Contreras-Sweet calls for instituting a $30 million fund to support those allegedly abused by Weinstein and installing a majority female board at the company.

She wrote, “reorganizing the company as a woman-led venture will be an inspiration to the industry, and a new model for how an entertainment company can be both financially successful and treat all its employees with dignity and respect.”