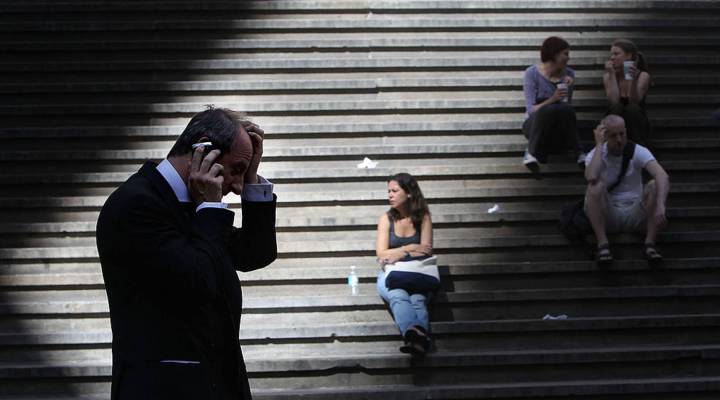 COPY
Sallie Krawcheck says her dismissal from Wall Street had to do with her gender. Mario Tama/Getty Images
Corner Office

Sallie Krawcheck says her dismissal from Wall Street had to do with her gender. Mario Tama/Getty Images
Listen Now

Sallie Krawcheck generated headlines shortly after the financial crisis hit because she asked her boss at Citigroup to pay some of their customers back the money they had lost. It didn’t go well and she was fired. After that, she ran Merrill Lynch for Bank of America, making her one of the highest-ranking women on Wall Street. But then the CEO who hired her retired and she was let go soon after. At the time, she didn’t think her dismissal had anything to do with her gender.

But since then, she’s launched Ellevest, a digital investment platform for women where she is CEO, and written a new book, “Own It: The Power of Women at Work.” One of her conclusions is that yes, her gender did have something to do with the reason she was fired from Wall Street, even though her division was exceeding expectations. And the lack of gender diversity is one of the reasons why the financial crisis in 2008 happened in the first place. Marketplace host Kai Ryssdal spoke with Krawcheck about her book. Below is an edited transcript of their conversation.

Kai Ryssdal: I’m going to repeat you, about yourself, from the book, about the about the middle of it or so: “I was an investment banker in my 20s, a research analyst in my 30s, a manager of complex wealth management businesses in my 40s, and now am an entrepreneur in my 50s.”

Sallie Krawcheck: Ooo, you had to say that last age, did you?

Ryssdal: Well, OK, so sorry. I do apologize. But that’s quite a track record in serious heavy-duty capitalism.

Krawcheck: Yeah, and I’ve loved every minute of it. And I believe that is the type of career path we’re going to see more of going forward. It will not be the “I started at X Y Z Co. at 22 and then I retired with the gold watch at 65.” I think it’s going to be much more “I did this, then I did this, then I did this.” Both because it’s interesting and fun, and our interests change over time, but really also because business is changing so swiftly that to have one type of a career for decades is not going to happen going forward.

Ryssdal: And also to the point of this book though, that you believe firmly, that women will have, as you had, increasing roles of responsibility, and it will not be a rare thing.

Krawcheck: I think that’s right. Today we know that gender diversity leads to not just better business results, but substantially better business results. That however, has not been enough to get women ahead. In fact, for all the conversation and debate we’ve had around diversity, we’ve been pretty stalled out. What is changing is that the characteristics we women bring to business are even more valuable. And also, if companies don’t treat us well, we now have the information and power to take action.

Sallie Krawcheck, author of “Own It: The Power of Women at Work.”

Ryssdal: This is the question in this interview where it will perhaps not be appropriate for everybody who’s listening in the car or in the kitchen. It’ll last about 45 seconds. So with that disclaimer — you wrote this book, so you know where I am going with this now.

Krawcheck: Oh, yeah, I know exactly where you are going.

Ryssdal: You, since I’ve already given away your age, you started on Wall Street 30 something years ago, and you say that at the beginning of your career it was literally an everyday occurrence for you, to come in to your desk and find on it a photo copy of male genitalia. And I asked that question because it’s shocking on its face, but also because the producer who was preparing this interview for me came into my office a couple of days ago said “Can you believe this?” And she’s, you know, a woman in her mid-t20s who has no concept of what it was like for you and your peers.

Krawcheck: Boys club. And I mean not a boy’s club as we think of today of, “Oh, someone said something that was gender insensitive or unaware,” but actively trying to get the women out. And I tell you, it’s really interesting when there’s a Xerox copy of male genitalia on your desk. It takes you a minute to realize what it is. “What is this piece of — Oh, my gosh, look at that.” And then how do you react? I had somebody say to me recently, “Well did you go to HR?” I was 22. I didn’t even know what HR meant. By the way, I needed the job. So I took it, I crumpled it up, I threw it away and said, “These guys are not getting rid of me.”

Ryssdal: Are you heartened that a woman in a professional setting in her 20s is absolutely horrified by that.

Krawcheck: Well, I think you have to be absolutely horrified by it. I was horrified too. But there was nothing I could do.

Ryssdal: Yeah, but isn’t it nice that it is so foreign to her experience. Right?

Krawcheck: Yes and no. Yes and no. You know, it’s funny because this summer was a real wake-up call for me. There was a New York Times op-ed this summer called “Bro Talk on Wall Street” in which it was indicated that — actually at the company at which I used to work — that the kind of crude, crass discussions were occurring. And then, of course, we had the Trump/Billy Bush conversation. And this stuff matters. It matters because we know the advancement of women in business has stalled out. You and I both know that you can’t objectify somebody with one group of people in one room, and then walk into another room with those same people and promote that individual. You’ve just really put that person down. And so I was a little disheartened that it hadn’t come as far as I had hoped.

Ryssdal: I can’t get Sally Krawcheck on the phone — a woman who was in the belly of the beast when the financial crisis happened — and not ask you your sense of why it happened. You have some fully developed thoughts on that.

Krawcheck: Oh, they’re fully developed. Because I was there, and the conventional wisdom of “Oh, evil geniuses perfectly foresaw what was going to happen, crooks etc. drove the economy off a cliff.” Not what I saw. In fact, I saw people who believed that the subprime market was going to continue to grow. In fact, the research indicates that subprime bankers had worse personal real estate performance than the public at large. So they believed it. What I saw was group think. What I saw were individuals who were alike, therefore had the same experiences, and so therefore didn’t have a full-sum picture of what was going on. They had that false comfort of agreement. And I saw it again and again; “Oh, you remember that last time?” “Oh, I remember that last time;” and I’m like, “What happened last time?” It’s group think. And the way you break group think is through diversity.

Ryssdal: That’s a great line. The false comfort of agreement. What do you make then, given all of that, what do you make of the change in regulatory attitude, now that there’s been a change of administration? The president has made it clear, both by his hires and by his executive actions, that he wants less regulation and a more favorable environment for Wall Street.

Krawcheck: Look, I don’t think that the individuals who voted for Trump believed that they were voting for the regulations for Wall Street to be rolled back. I don’t believe individuals elected the president and said, “You know what, we don’t want those firms to act in our best interest. Go ahead and roll it back.” I don’t believe that’s what they wanted. In fact, I think he campaigned on a tougher stance to Wall Street, not a looser stance.

Ryssdal: The book by Sallie Krawcheck is called “Own It: The Power of Women at Work.” She is the CEO of the investment firm or investment company — what do you call it? Investment what?

Listen to Sallie Krawcheck’s full interview on the Corner Office Podcast from Marketplace on iTunes.