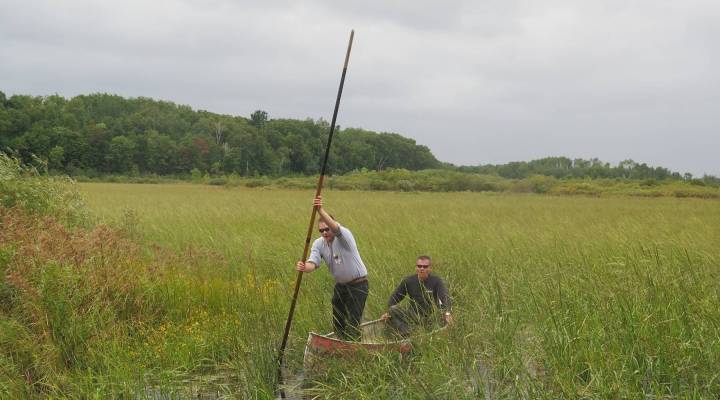 COPY
Bruce Martineau poles his father Francis Martineau to the shore of Deadfish Lake after harvesting wild rice on the Fond du Lac reservation on Sept. 5, 2017. Dan Karker/ for Marketplace
Way of life

On the shore of Deadfish Lake on the reservation of the Fond du Lac Band of Lake Superior Chippewa this fall, Ed Jaakola and Jerrad Ojibway scooped handfuls of wild rice from the bottom of their canoe into big plastic bags.

The rice was tough to harvest because of the wind, Jaakola said. Still, he estimated they had gathered 80 pounds of green rice, enough to cover the bottom of their canoe. It’s a tradition the 58 year old has carried on for as long as he can remember. “Probably 45 years for me,” he said.

Deadfish Lake, Zhaaganaashiins Odabiwining, in the Ojibwe language, is blanketed so thick with the tall green stalks of wild rice plants it doesn’t even look like a lake.

“Because you essentially don’t see water when you’re looking at this,” said Thomas Howes, natural resources manager for the Fond du Lac Band, “you see what essentially looks like a field of grasses.”

Wild rice is the slender, black grain of an aquatic, reed-like plant that grows out of the muck in the bottom of shallow lakes and rivers. It has a rich nutty flavor when it’s cooked. To understand why wild rice is so important to the Chippewa, or Ojibwe people, Howes said, you have to know their history.

The Ojibwe migrated to the Great Lakes region from the Northeast about 500 years ago. Their oral traditions tell of a prophecy that told them to journey west until they came to a place “where food grew on the water.”

“We came here from the East Coast of the United States, and were told we’d find our permanent home when we found this wild rice, this manoomin, this food, and that’s held to be true,” he said.

But a lot of the rice disappeared from the Fond du Lac reservation after the government dug drainage ditches in the early 1900s, part of a futile effort to make the land more suitable for farming. That disrupted the hydrology of the wild rice lakes. For about 20 years now, the tribe has been working to restore those lakes and bring the rice back.

Still, some tribal members complain that young people are not doing enough to keep the wild rice harvesting tradition alive. “The younger ones, they’re all on Facebook somewhere,” said Jerrad Ojibwe. They’re afraid of bugs, afraid of the water, he said. But later in the afternoon one final canoe pulled in to the landing at Deadfish Lake. Twenty year old Bruce Martineau steered the canoe to shore with a long wooden pole. His father, Francis Martineau, sat in the bow.

The younger Martineau heaved the canoe on to shore, the bottom of the boat covered with rice. His grandfather first taught him to harvest rice five years ago, he said. “It’s my culture,” he explained. “Natives have done it since the beginning of time.”

“It’s what brought us here,” his father Francis added. “The food that grows on the water.” He said he’s proud of his son for doing his part to keep the tradition alive, especially now that wild rice has made a comeback on the reservation. Bruce Martineau said he hopes to print up some business cards and try to sell rice to restaurants.

After the rice is dried and processed, the finished product sells for about $10 a pound. The Minnesota Department of Natural Resources estimates wild rice is worth at least $2 million to the state’s economy every year.

But Martineau also plans to give some away.

“God gives this, so it’s only right to give it back. Give it to other people that can’t go out there.”