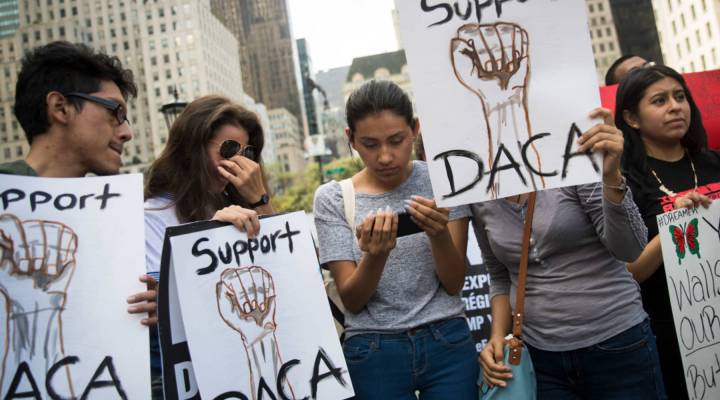 Tomorrow’s the deadline for people to temporarily renew their permission to stay in the U.S. under DACA, the program created by the Obama administration to shield undocumented immigrant children brought to the U.S. from deportation and allow them to receive work permits.

A clock started ticking a month ago when President Donald Trump said he would let the DACA program expire if Congress doesn’t take action by next March.

But to temporarily renew costs money. From time to time, we check in with MacArthur “genius” grant winner Jose Quinonez of Mission Asset Fund in San Francisco. Normally he helps immigrant families integrate into the U.S. financial system, but he saw this as an emergency, turning to charities and crowdsourcing to help people pay for their two-year extensions. He joined host David Brancaccio to talk about his efforts to help DACA recipients. An edited transcript of their conversation is below.

Jose Quinonez: There was a certain segment of DREAMERS that needed to apply for a renewal to renew their DACA status. They only had a month to actually make that happen. And so we very quickly determined that the best way to actually help them meet that deadline of renewing before Oct. 5, was actually to give them straight-out full scholarships to make that happen. We’ve actually raised almost close to $4 million from philanthropy and individuals throughout the country to actually help pay for their renewal status.

David Brancaccio: So what’s the renewal? It was almost $500, I think.

Quinonez: Right. It’s a very pricey application — it’s $495. And after the administration announced that they were going to end DACA on Sept. 5, they only gave people one month to renew. And for a lot of people, they’re just working, they’re struggling to pay their rent or just to make ends meet to begin with. And to add on top of that, a very unexpected cost of $500. You know it just kind of threw a lot of people off.

Brancaccio: Who came in needing the money?

Quinonez: We had a family for example that had three children — all three DACA recipients. They didn’t have the money to pay for $1,500 tor renew all three. They only had enough for one. And so they had to determine who of the three was going to get that application. But because of  our efforts, they were able to get all three through. I mean we heard from another student in Minnesota who was fearful to the point that he was sort of like paralyzed by that fear. So for days he didn’t know what was going to do. He applied and he told us that once he received the check in the mail, he basically started to cry. And so he sent us a note very appreciative of the fact that we were able to help him out. And then, of course, we took all of that to sort of say we are at least helping them have two more years of protective status so that they can continue to dream, they can continue to work and really give back to the only country that they know of.