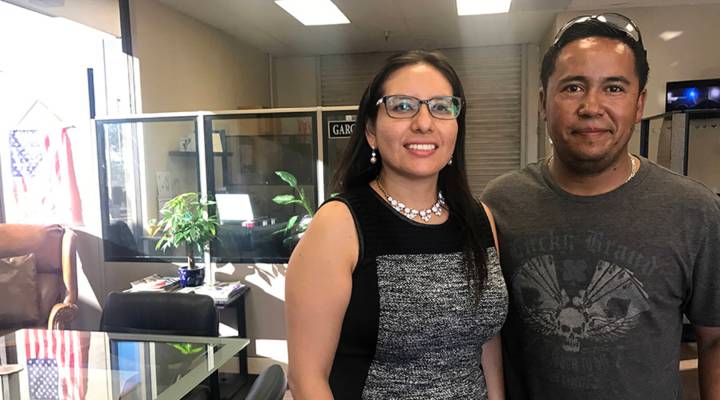 COPY
Dulce Garcia and Luis Tinoco have been dating for more than 15 years. They're both DACA recipients who own businesses just a few blocks away from each other. Reema Khrais/Marketplace

Dulce Garcia and Luis Tinoco have been dating for more than 15 years. They're both DACA recipients who own businesses just a few blocks away from each other. Reema Khrais/Marketplace
Listen Now

As teenagers in high school, Luis Tinoco and Dulce Garcia rolled in different circles. Tinoco was the loud guy in the hallways, always cracking jokes.

“And I was the opposite,” Garcia said. “Really quiet, really shy, really serious.”

“That’s why I never talked to her, because she was always with that mean face,” Tinoco said jokingly.

Garcia said she wasn’t mean, just focused. She was a steadfast 16-year-old with a 20-year plan.

Garcia said that was before she realized what it meant to be an unauthorized immigrant. She graduated and got accepted into her dream school, the University of California, Davis, but back then, without a Social Security number, she couldn’t take out loans to pay her tuition. So she went to community college instead and stayed put in San Diego. A year later, she and Tinoco crossed paths again at a party.

“And that’s when we actually both started talking about our struggles,” Tinoco said. “The similarities of what we wanted in life and what we couldn’t achieve at the time.”

Tinoco is also unauthorized. Like Garcia, he was brought to the U.S. from Mexico when he was just a little kid.

The two have been together ever since that night, and for 15 years, they’ve pushed each other to achieve what they wanted in life. They worked multiple jobs that paid under the table, took night classes and saved whatever they could.

Today, Garcia, who did become a lawyer, runs her own firm and specializes in immigration law. She has around 50 clients, and her degrees, along with an American flag, decorate the walls of her offices. Just a few blocks away is Tinoco’s auto body shop. He’s been in business for himself for a decade.

Between them, these two entrepreneurs, part of the Deferred Action for Childhood Arrivals program, employ six people. And their businesses are doing well enough that they’ve bought a house together. Tinoco also recently expanded into a bigger shop.

About 5 percent of DACA recipients have started their own businesses since enrolling in the program, according to the Center for American Progress. Garcia said her legal status under DACA gave her a sense of security.

For Tinoco, who began running his shop before DACA, his status gave him “more of a clarity of where [my] business is going. Before, I was just, like, I can lose it tomorrow.”

Both recently renewed their DACA status until 2019. If the program isn’t saved, more DACA recipients could go into business for themselves since it would be harder to hold onto their jobs.

But Garcia said her practice would likely collapse.

And she said immigration cases can last years — it’d be unclear if she has that much time.

“I can’t imagine someone that would say, ‘Oh, I’m dealing with this very traumatic experience in my life right now that I’m here to get help with, but I’m also going to have to deal with my lawyers’ drama,’” she said.

“I’m not going to hide — no! It took me so hard to build this, to establish this,” he said.

In the meantime, Garcia is putting her legal training to work — for herself. She and five other DACA recipients filed suit against the Trump administration last month, trying to block it from ending the program. Not long after the suit became public, the nasty voicemails started rolling in.

“You have leeched off of our country,” one woman said. “I want you to go home and make your own country great. This is not your country.”

Garcia said she doesn’t let people like that get to her. But when one man — not a client — left her a one-star review on her business page, that crossed that line.

“This business is like my child right now,” she said. “And it’s like, ‘Oh, gosh, you can attack me personally, but when you go after my business … now we’re talking. Now, I’m, like, truly angry.” Because, she said, not everything has to do with how she got here. This is about what she’s done since she’s been here, since she was that shy 16-year-old with a 20-year-plan. 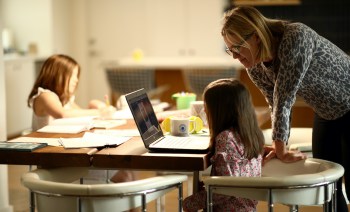