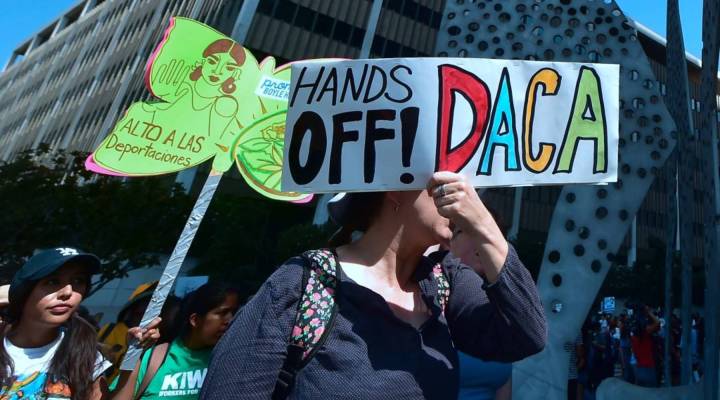 WASHINGTON (AP) — President Donald Trump is expected to announce that he will end protections for young immigrants who were brought into the country illegally as children, but with a six-month delay, people familiar with the plans said.

The delay in the formal dismantling of the Deferred Action for Childhood Arrivals, or DACA program, would be intended to give Congress time to decide whether it wants to address the status of the so-called Dreamers legislation, according to two people familiar with the president’s thinking. But it was not immediately clear how the six-month delay would work in practice and what would happen to people who currently have work permits under the program, or whose permits expire during the six-month stretch.

It also was unclear exactly what would happen if Congress failed to pass a measure by the considered deadline, they said. The two spoke on condition of anonymity because they were not authorized to discuss the matter ahead of a planned Tuesday announcement.

The president, who has been grappling with the issue for months, has been known to change his mind in the past and could still shift course. The plan was first reported by Politico Sunday evening.

Trump has been wrestling for months with what to do with the Obama-era DACA program, which has given nearly 800,000 young immigrants a reprieve from deportation and the ability to work legally in the form of two-year, renewable work permits.

Carrie Jung, a reporter with KJZZ in Phoenix, said that immigration is crucial to the economy in Arizona, a region with about 27,0000 DACA recipients.

“Our chambers of commerce here have come out in favor of immigration reform because they realize just how much of an impact that immigrants in general make to our local economy here in Arizona, but then also nationally,” Jung said.

The expected move would come as the White House faces a Tuesday deadline set by Republican state officials threatening to sue the Trump administration if the president did not end the program. It also would come as Trump digs in on appeals to his base as he finds himself increasingly under fire, with his poll numbers at near-record lows.

Trump had been personally torn as late as last week over how to deal with what are undoubtedly the most sympathetic immigrants living in the U.S. illegally. Many came to the U.S. as young children and have no memories of the countries they were born in.

During his campaign, Trump slammed DACA as illegal “amnesty” and vowed to eliminate the program the day he took office. But since his election, Trump has wavered on the issue, at one point telling The Associated Press that those covered could “rest easy.”

Trump had been unusually candid as he wrestled with the decision in the early months of his administration. During a February press conference, he said the topic was “a very, very difficult subject for me, I will tell you. To me, it’s one of the most difficult subjects I have.”

“You have some absolutely incredible kids — I would say mostly,” he said, adding: “I love these kids.”

All the while, his administration continued to process applications and renew DACA work permits, to the dismay of immigration hard-liners.

News of the president’s expected decision drew strong reactions from advocates on both sides of the issue.

But Rep. Steve King, an Iowa Republican who has called DACA unconstitutional, warned that a delay in dismantling it would amount to “Republican suicide.”

It would be up to members of Congress to pass a measure to protect those who have been covered under the program. While there is considerable support for that among Democrats and moderate Republicans, Congress is already facing a packed fall agenda and has had a poor track record in recent years for passing immigration-related bills.

House Speaker Paul Ryan and a number of other legislators urged Trump last week to hold off on scrapping DACA to give them time to come up with a legislative fix.

“These are kids who know no other country, who are brought here by their parents and don’t know another home. And so I really do believe that there needs to be a legislative solution,” Ryan told Wisconsin radio station WCLO.

The Obama administration created the DACA program in 2012 as a stopgap to protect some young immigrants from deportation as they pushed unsuccessfully for a broader immigration overhaul in Congress.

The program protected people in the country illegally who could prove they arrived before they were 16, had been in the United States for several years and had not committed a crime while being here. It mimicked versions of the so-called DREAM Act, which would have provided legal status for young immigrants but was never passed by Congress.

As of July 31, 2015, more than 790,000 young immigrants had been approved under the program, according to U.S. Citizenship and Immigration Services.

The House under Democratic control passed a Dream Act in 2010 but it died in the Senate. Since Republicans retook control of the House in late 2010, it has grown increasingly hardline on immigration, killing the Senate’s comprehensive immigration bill in 2013 and failing to even take up a GOP border security bill two years later because of objections from conservatives.

So despite Ryan’s personal commitment on the issue and his comments in favor of the young immigrants, action to protect them may be unlikely in the House — absent intense lobbying from Trump.