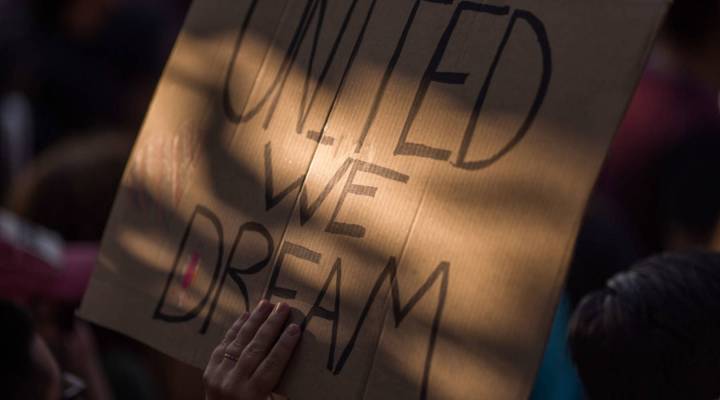 We’ve hit upon a few pet topics during the first several months of doing “Make Me Smart”: avocado toast, managing our own news intake and, of course, businesses’ ability to act as a check on our businessman president.

We saw that tension again this week when the Trump administration announced plans to rescind the Deferred Action for Childhood Arrivals program in six months. The program gives work permits and protection to certain undocumented immigrants brought here as children, also known as Dreamers, and the move was widely condemned by business leaders. Major tech companies like Apple and Microsoft vowed legal protection for DACA recipients on their payrolls, and not a single Silicon Valley player spoke out in support of the move. On the show this week, we wondered what kind of effect, if any, these forceful statements have on Trump.

In the days since, Trump has all but said he wants Congress to pass protections for Dreamers, even tweeting that DACA recipients have “nothing to worry about!” If Trump wants DACA off his plate, companies will be more effective making an appeal to Congress. Tech lobbying is at a record high, but how much of that spending is actually going toward immigration issues? That’s less clear.

Take Google. Its parent company, Alphabet, is the biggest spender in tech and No. 7 overall this year, up from 12th last year. Google spent $5.9 million on lobbying last quarter, and Alphabet is on pace for a record year, according to the Center for Responsive Politics.

Each quarterly lobbying report lists dozens of issues Google is lobbying, but Congress doesn’t require a breakdown of how much the company spent on each cause. So we have no way of knowing what Google spent fighting Trump’s travel ban, which comes up a couple times in its reports, or lobbying on issues related to H-1B visas and high-skilled immigration, two of the most ubiquitous immigration issues for Google.

Immigration wasn’t the company’s primary focus, it seems. According to the Center for Responsive Politics, so far in 2017, copyright, patent and trademark issues came up in the most reports. Consumer product safety and labor, antitrust and workplace issues also appeared more than immigration, which spiked after Trump took office.

The Center for Responsive Politics and Quartz analyzed thousands of these disclosure forms from 2008 to the first few months of the Trump administration. They found Microsoft consistently mentioned immigration more than Alphabet, Facebook, Amazon and IBM. Some big players, like Apple and Uber, have barely mentioned immigration in their lobbying reports.

But even within Microsoft, immigration has seemingly never been the main issue, and it’s impossible to know how the company is dividing resources between these different issues. Still, nearly every time Microsoft has mentioned immigration in its lobbying reports, it’s been about high-skilled worker visas and H-1B. There is one mention of “immigration reform, generally” but it’s not clear what that means.

Other leading tech companies like Amazon and Apple barely mention immigration issues at all. But while those tech companies and others have not been shy in condemning Trump in the press, they picked their legislative fights carefully. The debate around high-skill visa programs holds much higher stakes for these companies, and that’s what they seem to throw their weight behind.

“At Microsoft, when we think about H-1B, it’s mostly about high-skilled labor that allows us, an American company, to be globally competitive,” CEO Sataya Nadella told us earlier this year, adding that the company supported reforms to that end. But the Verge points out Microsoft has pushed hard to merely expand the existing program.