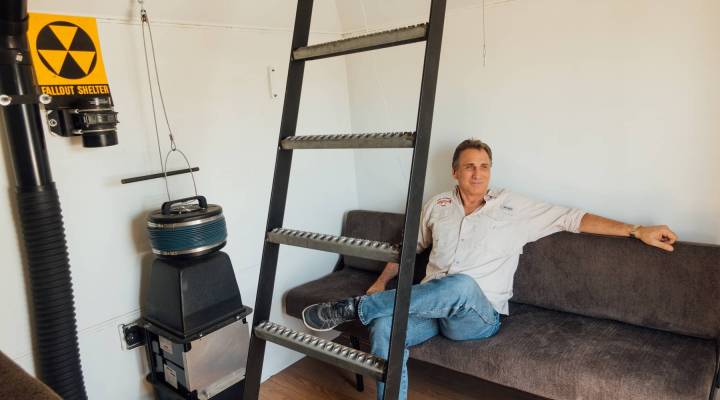 Ron Hubbard is stepping into a 26-foot steel bunker ready to be buried several feet underground.

Hubbard is the president of Montebello, California-based Atlas Survival Shelters. He’s one of several entrepreneurs in the bunker business who said that these days, more customers are in the market for a place to hunker down.

Rising tensions between North Korea and the U.S. are on buyers’ minds, according to Hubbard. He said news about hurricanes, earthquakes and the increased threat of nuclear war are driving interest in his backyard bunkers, that starting at $18,999, are seen as a real estate perk.

“Builders feel that it’s a good investment to add to a new house being built,” Hubbard said. Atlas Survival Shelters opened a new factory in Texas earlier this year. Hubbard said sales are up in 2017.

Another bunker maker reporting brisk business is Robert Vicino, CEO and founder of The Vivos Group, a network of high-end community shelters in the U.S. and Europe.

“It gets them to the other side of whatever the catastrophic event is, until it’s safe to come out on the surface,” he said.

Vicino resists the suggestion that he is profiting by encouraging paranoia. “The fear is already out there. The threats are out there. We didn’t create them,” he said.

Some disaster preparedness experts are dubious about people investing in high priced shelters or bunkers. Hal Kempfer is a retired Marine Reserve Lt. Col. and CEO of Knowledge and Intelligence Program Professionals, a consultancy for strategic management services, such as best practices to deal with threats to national security.

“Getting to your bunker in the hills? Probably not going to make it, in most cases,” he said.

During a seminar on nuclear preparedness for the city of Long Beach, California, Kempfer said that in the event of a disaster, people are more likely to need to shelter in place, at home or at the office. “So I always have lots of water on hand. I got big bottles of water,” he said. “Because that’s the first thing we’re going to run out of.”

Kempfer recommends enough water for a minimum of 3 to 4 days.