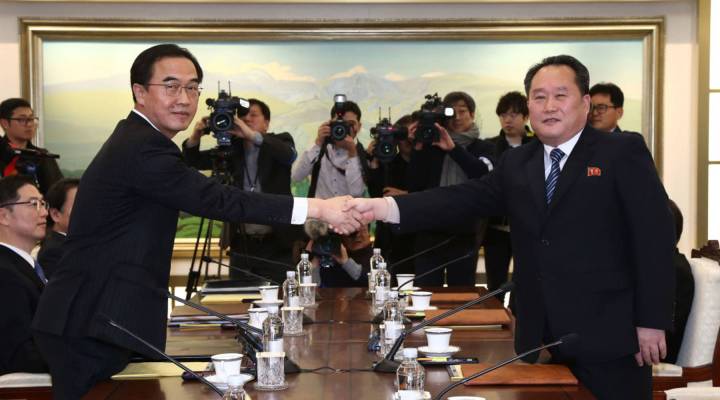 After the first formal talks between North and South Korea in just over two years, the forthcoming Winter Olympic Games have become the catalyst for some easing of tensions. South Korean Vice Unification Minister Chun Hae-sung told reporters today that the North Korean delegation said it would send an Olympic delegation, including officials, athletes, and cheerleaders, according to the Associated Press.

Marketplace Morning Report host David Brancaccio spoke with the BBC’s Hyung Kim, who is in Seoul, about how this will affect economic sanctions that are in place against North Korea. Below is an edited transcript of their conversation.

David Brancaccio: Give us a sense of which sanctions would have to be modified or lifted temporarily to allow this Olympic interaction to occur.

Hyung Kim: First of all, it depends on how the delegation would be coming to Pyeongchang. If they come by flights that means they might use [North Korea’s Air Koryo airlines] and [Air Koryo] is on sanctions list … What I mean by sanction is South Korea’s unilateral financial sanctions. However, if they come by bus or by land, which seems very likely at this point, that may not be the issue. And also if the delegation includes some of the figures that are on sanctions list, that sanction may have to be relieved as well.

Brancaccio: Now can the South Koreans and the North Koreans just work this out amongst themselves or do you think the United Nations might have to get involved in some of the details here?

Brancaccio: What’s your impression about individuals, officials from North Korea who might want to come to the Olympics? Might certain names have to be added to the list because at the moment they’re prohibited from visiting?

Brancaccio: And the North Koreans want to send some athletes and cheerleaders.

Kim: Definitely, but that wasn’t a surprising thing. Cheerleading squad performance team — that was expected. And taekwondo demonstration team — somewhat expected. However, what was not expected is what they call a spectator group or audience group. [A South Korean] unification vice minister in Seoul actually told reporters that they are not 100 percent sure what the North means by “spectator groups” since they have not sent this kind of group before but it could consist of high-level, high-ranking officials in the North.

Brancaccio: So interesting. And probably an unanswerable question at this point and probably the most important question is, “Is this a prelude to further talks and some kind of easing of tensions?” Is there any way to answer that at this point?

Kim: Well, that’s exactly what the South wants, that this could be a beginning of something — something bigger, something other than sports. And one indication is that so many people are paying attention [to] whether or not Seoul officials would be able to bring up the issue of nuclear or even mention the word “nuclear.” But apparently they did, according to the Unification Ministry. Unification minister who led the delegation said that there has to be peace or there has to be an end to the tension on the Korean Peninsula and in order for that to happen, talks should happen including talks for denuclearization. So he did mention the word “denuclearization.” However, the Unification Ministry said that the North responded by listening carefully without immediate response. So it’s uncertain. North Korea has always been unpredictable in many ways.