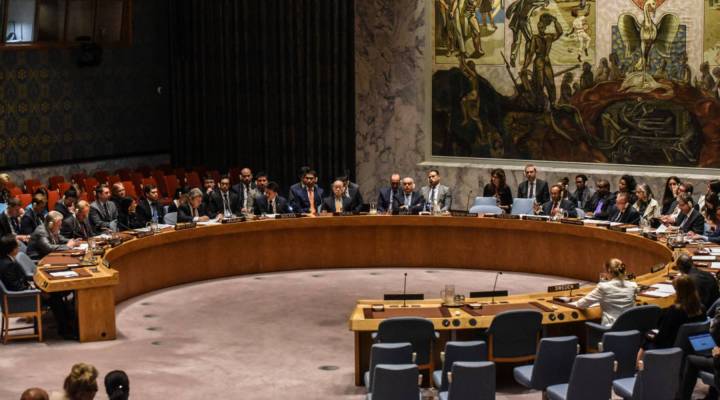 COPY
The United Nations Security Council holds a meeting on North Korea on September 4, 2017 in New York City. The security council was holding its second emergency meeting in a week after North Korea announced the detonation of what it called an underground hydrogen bomb September 3. Stephanie Keith/Getty Images

The United Nations Security Council holds a meeting on North Korea on September 4, 2017 in New York City. The security council was holding its second emergency meeting in a week after North Korea announced the detonation of what it called an underground hydrogen bomb September 3. Stephanie Keith/Getty Images
Listen Now

North Korea detonated what it has identified as a hydrogen bomb on Sunday, upping tensions, again. Over on Fox News Sunday, Treasury Secretary Steven Mnuchin said he was working on plans to do more to cut off North Korea’s economy.

When you look at the list of who does trade or business with North Korea, there’s a biggie on there: China.

For more, Marketplace’s Adriene Hill spoke with Joseph DeThomas, a former US ambassador and now professor at Penn State’s School of International Affairs.

Adriene Hill: How do you think China’s sort of thinking about this right now? They’re in a little bind here.

Joe DeThomas: They have been trying to make this issue go away for a long time and it won’t go away. So they’re, I’m sure, deeply unhappy right now.

Hill: What are the choices they face it realistically?

DeThomas: From their point of view having a nuclear weapons possessing North Korea is a bad outcome. It’s just only the third-worst outcome.

Hill: What are the two worst?

DeThomas: The two worst are the collapse of an Asian communist regime on their border, and the second one would be a second Korean war on their border. So they’re looking at this and trying to figure out how they don’t get to third without having one of the other two hit them.

Hill: Why hasn’t China been more willing to cut economic ties with North Korea? You mentioned this idea of regional stability. Can you talk me through that?

DeThomas: Yes. From China’s perspective, especially now, I mean in terms of foreign trade, North Korea is totally dependent on China. And that includes some things that are key like oil. So China knows if it really puts the pressure on, three bad things could happen. The first one is that the North Koreans might do something truly nuts either to them or to the South Koreans or who knows whom. The second concern they have is that the regime could collapse and with it the entire state in North Korea and then China is left with a mess on its border. You know hundreds of thousands of refugees a collapsed communist state all kinds of scrambling between the Americans the South Koreans and the Chinese over the remains. That doesn’t sound very appealing to them then.

Hill: Now we have on the flip side, President Trump and Treasury Secretary Steven Mnuchin threatening to sanction China or stop trade with China if it doesn’t do more to help with North Korea. Also not a good outcome.

DeThomas: Agreed. And for us as well. Sanctioning China, I mean if you’re saying sanctioning some Chinese entity that’s doing something with North Korea that it shouldn’t—now we’ve done that already and will continue to do it. And I hope the Trump administration does sanction people who are giving aid and comfort to the North Korean nuclear program. But if you are talking about a point blank, if your country trades with North Korea we will not trade with you. That is about as close to holding a gun to your own head and saying “One more step and I’ll shoot.”

DeThomas: Well you know we have over $600 billion of trade with China. Many of our companies are dependent on Chinese manufacturers as sources of parts for their own goods. Our premier companies are dependent on the Chinese market. So if you’re saying China trade with North Korea or trade with us it is possible the Chinese will blink and that means you know you’re saying well let’s substitute our concern about nuclear war in Asia with a major global economic crisis. There’s got to be a better approach than saying, “We will set off a major economic crisis in the world if everybody doesn’t do what we tell them to do.”