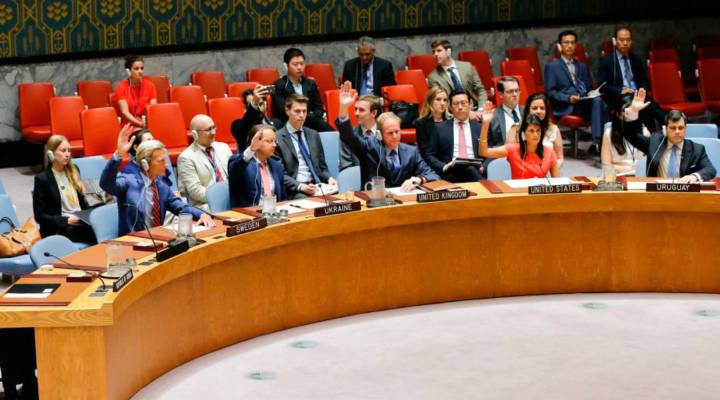 The U.N. Security Council agreed to sanction North Korea over the weekend, after reports the country successfully tested two intercontinental ballistic missiles in the last month. The sanctions would cut North Korea’s exports by roughly $1 billion, a move backed by China, which accounts for nearly all of North Korean trade.

The sanctions ban North Korean exports of coal, iron, lead and seafood. Thomas Byrne, head of the Korea Society, a nonprofit dedicated to U.S.-Korea relations, said China and North Korea used to have a much stronger trade relationship.

“One time North Korea was considered to be a strategic asset for China, but I think that asset quality has deteriorated,” Byrne said. “Companies and the province that border North Korea do get access to cheap high-grade coals, but the economy as a whole does not really benefit from economic exchanges with North Korea.”

Following the U.N.’s call, let’s take a look at some of the countries that have imposed sanctions on North Korea over the years:

Japan and North Korea have a fraught history, with North Korea admitting that it had kidnapped more than a dozen Japanese citizens in the 1970s and 1980s. These abductions have played a crucial role in negotiations ever since.

In 2014, North Korea agreed to reopen investigations into the abductions, which Japan responded to by easing or lifting certain sanctions — these included re-allowing North Korean citizens into the country and partially lifting an embargo on ships from the country.

However after North Korea’s decision to launch a rocket in early 2016, Japan restored those sanctions and decided to both expand restrictions on travel and implement a complete ban on visits from North Korean ships. In retaliation, North Korea put a halt to the kidnapping investigation. And this year, Japan decided to freeze the assets of five organizations and nine individuals connected to North Korea, according to Reuters.

Back in 2010, tensions between North Korea and its neighbor grew after North Korea sank one of South Korea’s warships, according to reports. (Pyongyang called the claim a “fabrication.”)

South Korea then punished North Korea with a series of sanctions that cut off “tourism, trade and private aid,” reported Reuters.

President Trump and South Korean President Moon Jae-in talked over the phone on Sunday. According to the White House, during the call, “the two leaders affirmed that North Korea poses a grave and growing direct threat to the United States, South Korea, and Japan, as well as to most countries around the world.”

The Obama administration passed a bipartisan bill known as the North Korea Sanctions and Policy Enhancement Act of 2016.

The measure stipulated that the president investigate human rights abuses and the proliferation of luxury goods, among other acts it deems as “sanctionable conduct.”

North Korea’s state-run news agency, KCNA, has accused the U.S. of pushing the U.N. to pass these new sanctions and is “trying to drive the situation of the Korean peninsula to the brink of nuclear war.”