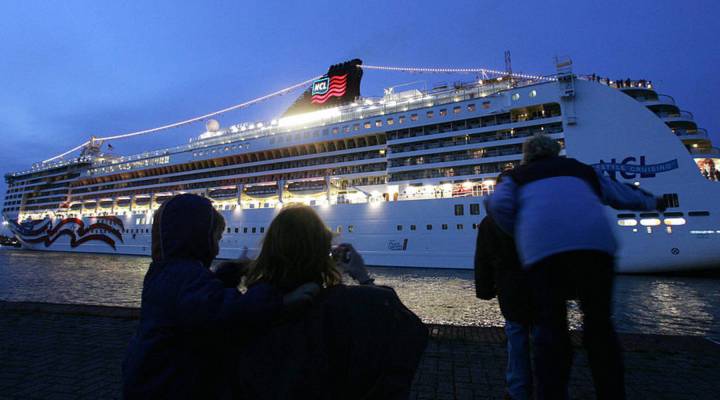 Hiring Americans and bringing jobs back to the U.S. has been a cornerstone of President Donald Trump’s campaign and presidency. Yet as we previously discussed on Marketplace, Trump is not the only president to advocate for America-first policies. One such policy was the Passenger Vessel Services Act (PVSA), which was signed into law by President Grover Cleveland in 1886.

Under the PVSA, only ships built in the U.S., owned by U.S. companies and staffed with American crew are allowed to ferry passengers from one U.S. Port to another, according to US. Customs and Border Protection. As a result — even today, more than a century later — the law still affects who certain commercial ships, like cruise ships, can hire.

The PVSA is similar to another century-old maritime regulations that made the headlines this week: the Jones Act. The act prohibits foreign built and owned ships from transporting goods domestically similarly to the way that PVSA prohibits the transportation of people. On Thursday, the White House announced that it was temporarily lifting the act’s restrictions for ten days to allow foreign ship to ferry goods from various U.S. ports to Puerto Rico in order to speed up its recovery efforts following Hurricane Maria.

While the Jones Act has protected the domestic shipping and shipbuilding industries from international competition, the PSVA does not seem to have done the same for the cruise industry. An op-ed published earlier this year in the Los Angeles Times argued that instead of protecting U.S. jobs, the PVSA actually ruined American cruises and cost American jobs.

“Often, to avoid falling afoul of the PVSA or being forced to travel in the wrong direction to satisfy it, cruise ships simply skip U.S. ports altogether,” it read. “Most cruises to Alaska depart from Vancouver, skipping Seattle. Many cruises to Hawaii depart from Ensenada, rather than San Diego.”

In fact, the op-ed points out, the Pride of America — owned by Norwegian Cruise Line — is the “only passenger vessel in the entire world that has permission to sail between U.S. ports.” If a foreign operated ship were to transport passengers from one U.S. port to another, it would be required to pay a fine of $300 per passenger. Since most cruise ships have hundreds or even thousands of passengers, that fine can add up very fast.

In order to ferry passengers to a number of different ports in the Hawaii Islands, the Pride of America sails under a U.S. flag. As such, it has to have a crew that consists only of U.S. citizens and U.S. permanent residents.

“What makes it very unique is that it is an exclusively U.S. workforce on board that ship,” explained Brian Perez, a manager of fleet recruitment at NCL, which owns 15 ships and is in the process of building another. “So we travel throughout the country doing domestic recruitment. Whereas for the other ships in our brands, we do international recruitment in the global market.”

While in the U.S. cruise jobs can be an exotic novelty, overseas they are often a norm and in high demand with each job listing receiving as many as 100 applicants, according to Michael McGarry, senior vice president of government relations and public affairs at ‎Cruise Lines International Association.

When it comes to U.S. candidates, most often their experience of being on a ship has been as a passenger, said Perez. At a recent recruiting event in Washington, D.C., just one of the candidates had prior experience working on a ship while four others had attended cruise in the past as passengers.

Perez was in D.C. to find potential employees to join the crew on the Pride of America. The ship is like a small city. In addition to more than 2,000 passengers there are about 949 employees. “Think of them as 949 roommates,” said Perez.

Overall, the cruise industry hires hundreds of thousands of people. The Cruise Lines International Association represents 98 percent of the global cruise industry. Its members employ more than 200,000 people around the world. However, the Pride of America is the only one with an all American crew.

Because of its unique status, unlike many other cruise ships that may take passengers all around different ports in different countries, the Pride of America remains in the Hawaiian Islands year round.