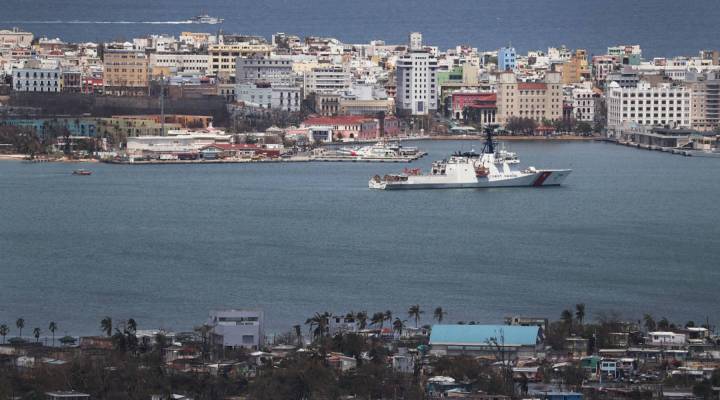 At @ricardorossello request, @POTUS has authorized the Jones Act be waived for Puerto Rico. It will go into effect immediately.

A week after Hurricane Maria made landfall in Puerto Rico, most of its residents remain without power, access to clean water and little to no food. Officials, including President Donald Trump and Puerto Rico’s governor Ricardo Roselló, have said help is on the way via planes and boats. However, due to an almost 100-year-old law, the help coming in via boats is currently limited only to U.S. ships.

The Jones Act, which is part of the Merchant Marine Act of 1920, “provides that the transportation of merchandise between U.S. points is reserved for U.S.- built, owned, and documented vessels,” according to U.S. Customs and Border Protection.

The law was intended to protect the U.S. shipping industry — including the ship building sector since all of the ships have to be made in the U.S. — from competition in transporting goods in-between domestic ports. A similar law called the Passenger Vessel Act was passed in 1886 and prevented foreign built and owned ships from ferrying passengers from one U.S. port to another.

Since Puerto Rico is a commonwealth of the United States, it falls under the Jones Act and resources being sent in from other U.S. ports have to be carried on U.S. ships. A number of U.S. lawmakers — including New York Congresswoman Nydia Velázquez and Arizona Senator John McCain — have asked the U.S. Department of Homeland Security to temporarily lift the Jones Act restriction and allow foreign ship to help ferry resources to the island.

Most recently, the Department has lifted such restriction in the wake of hurricanes Harvey and Irma. The Jones Act has also been suspended by former President George W. Bush after Hurricane Katrina in 2005 and by former President Barack Obama after Superstorm Sandy in 2012, according to the Wall Street Journal. However, Gregory Moore, a spokesman for Customs and Border Protection, told Reuters via statement that “the situation in Puerto Rico is much different.” When it comes to Puerto Rico, there is a “sufficient capacity” of U.S. ships, but limited port capacity to offload and transit needed goods, he said.

CBP: Jones Act has not been waived because “there is sufficient capacity of US-flagged vessel capacity to move commodities to Puerto Rico.” pic.twitter.com/AulGAVrYL2

U.S.-based shipping firms also insist that the issue isn’t the number of ships available but the ability to unload cargo in Puerto Rico and transport it from ports to other areas. As Hurricane Maria swept through the island, it has caused significant damage to its infrastructure including its roads. Furthermore, there is lack of fuel on the island and so there are a limited number of trucks available to move the goods around.

During a press conference held on Tuesday, President Trump defended the administration’s handling of the situation by pointing out that Puerto Rico is an island and that the government can’t just “drive your trucks there from other states.”

“It’s very tough, because it’s an island,” he said. “In Texas, we can ship the trucks right out there. And you know, we’ve gotten A-pluses on Texas and on Florida, and we will also on Puerto Rico. But the difference is, this is an island sitting in the middle of an ocean. And it’s a big ocean; it’s a very big ocean. And we’re doing a really good job.”

On Wednesday morning, while speaking with CNN, Governor Roselló said he still expected the Jones Act restrictions to be lifted. However, just hours later President Trump reiterated that the U.S. has a lot of ship “out there” and that “a lot of people who are in the shipping industry don’t want” the restrictions to be lifted. The Department of Homeland Security confirmed to Marketplace that it had no plans to waive the Jones Act restrictions at the moment.

Trump also said he’s considering lifting it, but shipping industry’s opposition giving him pause because “We have a lot of ships out there.” https://t.co/6ftQzx0hiV

In the meantime, the U.S. is also using planes to get supplies to Puerto Rico’s residents. Rob Brisley, spokesman for Customs and Border Protection, told CNN that a plane carrying 3,500 pounds of water, ready-to-eat meals, diapers and other supplies will fly from Miami to Puerto Rico on Wednesday.

3500 pounds of supplies headed to Puerto Rico on a DASH 8 CBP plane, @cnn team will be onboard. pic.twitter.com/SieEyrIyqp

Ryan Kailath contributed to this report.