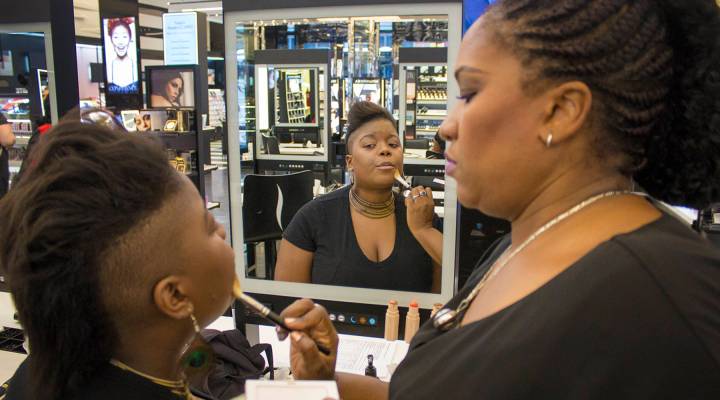 COPY
Bamike Ogunrinu, left, sits as New York City-based makeup artist Etzel Ecleston does her makeup with Fenty Beauty products. The brand, launched this month by popstar Rihanna, has been selling out online and in stores. Peter Balonon-Rosen/Marketplace

Bamike Ogunrinu, left, sits as New York City-based makeup artist Etzel Ecleston does her makeup with Fenty Beauty products. The brand, launched this month by popstar Rihanna, has been selling out online and in stores. Peter Balonon-Rosen/Marketplace
Listen Now

When it comes to products like clothes, shoes, home goods, there’s no shortage of celebrity endorsements. This month, pop superstar Rihanna added her name to the world of makeup. Her line, Fenty Beauty, launched Sept. 8.

And fans are going wild for it — especially women of color.

Fenty’s current collection includes highlighter, lip gloss and 40 different shades of foundation. Its 12 darkest shades have been selling out online and in stores, and when more product arrives, crowds wrangle over Rihanna’s latest offering. The line is named after Rihanna’s last name (her full name is actually Robyn Rihanna Fenty).

“She has this, like, widespread reach, that’s one thing, but she has this appeal to get people energized about beauty,” said Ashley Weatherford, senior beauty editor at New York Magazine’s The Cut. “Not only that, the makeup is good and it’s a lot of makeup, too.”

So, what makes Fenty Beauty such a game changer?

Two Fenty Beauty products. The brand has been selling out in-store and online since it’s launch at the beginning of September.

On a recent Thursday, brushes and makeup in hand, Ecleston demos the new makeup line on her friend. Her friend, Bamike Ogunrinu, is excited.

“So, if you look directly into her face and then her chest area, it’s one color,” Ecleston said. “Usually, you would have to do two or three colors.”

That usually involved buying two or three products at, say the drug store, and mixing them to get the right skin tone.

“Then, it gets really expensive,” Ecleston said.

Fenty is currently available only through Fenty’s website and Sephora. At $34 each, the foundation is more expensive than those drug store brands. But, Ecleston said, it’s much cheaper than other high end options.

And it has products in colors black and brown women can’t find elsewhere.

“As a woman of color, you tend to always have that issue,” Ogunirnu said. “It’s nice to have a line that came out specifically not to just cater to people of deeper skin tones, but everyone.”

And that notion sits right at the heart of Fenty’s messaging. Fenty’s online ads are as much advertisements for the product as they are an ode to diversity. Models of all skin tones and facial shapes make up the ad.

Although 38 percent of women in the U.S. are non-white, many beauty brands have historically lagged in producing makeup in shades deep enough for darker skin tones.

Model Leomie Anderson, who’s featured in Fenty Beauty’s campaign, has been vocal about the lack of makeup diversity. It’s something that Ecleston, the makeup artist, says she feels all the time. Fenty’s message that it can disrupt that, she said, resonates with people.

“Becuase of the fact that it is Rihanna,” Ecleston said. “They can go ahead and believe this is going to be amazing.”

Shelves of Fenty Beauty at a New York City Sephora store. The darkest shades are all sold out.

Or, simply, that Fenty was designed for them — no matter what they look like. Fenty’s marketing is all about inclusion, diversity isn’t an add on, it’s the soul of the product.

Or at least that’s what the ads seem to say.

But for RiRi to stay on top, she needs brand loyalty. Ecleston thinks she’ll have it.

“Sephora better hurry up and get a lot of this in stock,” Ecleston said. “Come Christmas time, I can only imagine how this is going to be crazy.”

Fenty will have eye products like eye shadow and mascara available then.

Ecleston hopes other brands will see Fenty’s success and make makeup for women of color more accessible. The fact that it wasn’t, she said, sent a message to people.

“Not only was it hopeless,” Ecleston said. “But they felt that somebody couldn’t relate to them.”

Now, she said, it’s less hopeless — and we already know how Rihanna feels about love in hopeless places.