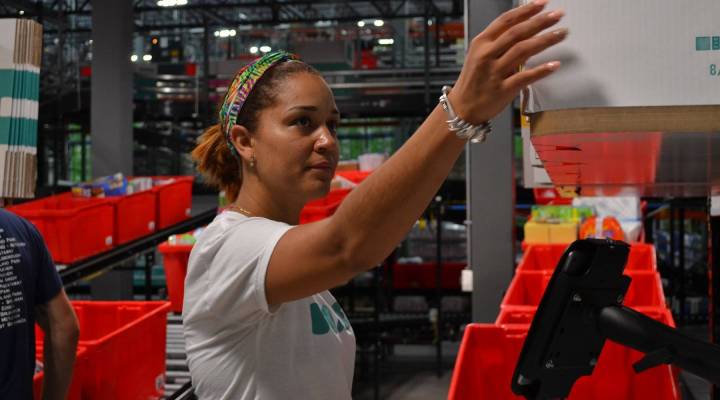 Veronica Mena is one of those people whose energy is practically contagious. She shouts “let’s do this!” to her fellow workers as she moves between conveyor belts and cardboard cartons. She peppers her own sentences with “let’s go” a lot. You get the feeling she could have an alternate career as a life coach.

“I like to motivate people,” said Mena, a packing supervisor for the e-retailer Boxed. “This is automation, and as you can see, we don’t stop.  I’m like, let’s go, you can do this, I know you can do better.”

Mena works in Boxed’s warehouse in Union, New Jersey. Boxed is into bulk — do you want 12 rolls of paper towels, and 60 Clif bars, and maybe a couple gallons of cheese balls?  Boxed is your site. It bills itself as the Costco of e-retail.

And Boxed is definitely competing with Amazon in terms of attracting workers. Last month, Amazon held job fairs throughout the country in an effort to hire 50,000 people before the holiday season. As more of us shop online, e-retailers need more humans at the warehouse fulfilling those orders.

Well, for the time being, at least, people are still needed. Boxed automated parts of its Union warehouse earlier this year without laying anyone off. There are now two miles of conveyor belts that go through the building, and a tall robot casts a shadow over the space, where baskets labeled “iBot” help to sort orders correctly.

The human workers spend a lot time interacting with those robots. They rotate the different baskets labeled iBot, and tape cartons together. They scan bar codes and follow instructions on tablets. Watching those interactions makes one wonder: how long will people be needed?

“This is not difficult, to be honest,” Mena said. “I always say as a packer — don’t do anything else but what the tablet tells you to do. The tablet will take you to what needs to be prepped, which boxes. It’s telling you everything, you just need to follow up.”

The CEO of Boxed is Chieh Huang. He is clearly interested in both keeping humans employed and in making sure his warehouses are run as efficiently as possible.

“The reality is there’s not an ability to have lights-out automation,” Huang said, using an industry term for when no lights will be needed in warehouses, because they’ll be populated entirely by robots. “The reality is the dexterity of a human hand still hasn’t been replicated.”

As traditional retail takes a hit, more of those human hands are moving from jobs in malls to the warehouse. Boxed says that most jobs in the warehouse have an hourly wage in the teens, which beats New Jersey’s minimum wage of $8.44 per hour. The thing that seems to be lost in that? Interaction with other humans. Unlike when you sell a sweater in a store, Mena never meets the people whose boxes she packs, even though she includes a handwritten note in every order she sends.

“Of course I would like to meet them, I think everyone would like to,” Mena said. “Especially when I see my name in an order — oh, this is Veronica, too!  Or if I send it myself, I want to know their feedback.”

Mena wonders about the future of her job — but she’s not worried. “Changes always make people think: what’s going to happen? Am I still going to be needed? Here in 10 years, who knows? Things change. But we will make sure we get ourselves prepared for it.”

In a sense, just as Mena relies on her human ability to rouse the troops — and herself — to get the job done, she’ll need that same enthusiasm to take on whatever her future position might hold. As part of her preparation for that future, she wants to learn more about the systems behind Boxed.

“When you think, who’s making the machines? Humans. So we are always going to be needed.” 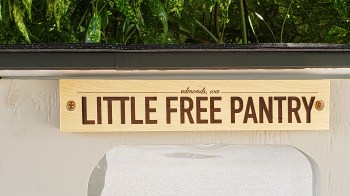