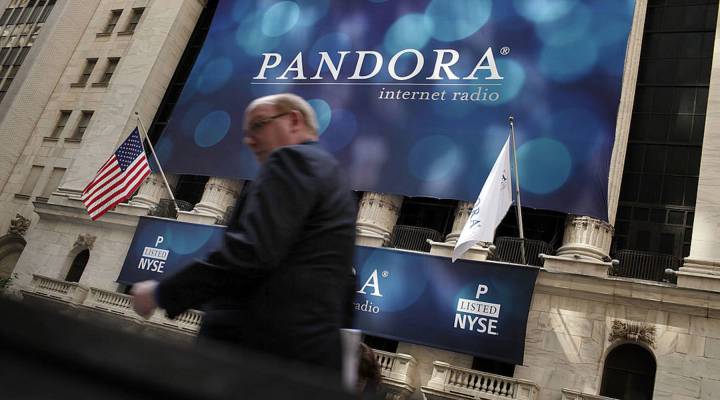 COPY
A banner with Pandora's logo in front of Wall Street on the first day of trading as a public company in 2011. The online radio service has fallen a long way since then.  Spencer Platt/Getty Images

A banner with Pandora's logo in front of Wall Street on the first day of trading as a public company in 2011. The online radio service has fallen a long way since then.  Spencer Platt/Getty Images
Listen Now

Plenty of stocks have taken a pounding this year then bounced back. And then been pounded again.

But for Pandora, the internet radio giant, it’s been a whole lot of  pounding, and precious little bounce back.

Shares finished the day down 12 percent.  Yesterday the company reported a $169 million dollar net loss for 2015. And now there’s news that after blazing the trail for music-streaming services, Pandora may be on the block.

One problem for Pandora: we live in an on-demand world.  If want to hear, “Bad Day,” for instance, I can get it instantly on Spotify or Apple Music.

But on Pandora, I can’t pick. I get a song that sounds similar to “Bad Day.” But it isn’t “Bad Day.”

Erik Gordon, from the University of Michigan’s Ross School of Business, said Pandora runs the risk of becoming the tech industry’s latest “stumbling pioneer,” or “the pioneer who blazes the trail and then falls to the wayside. It’s been repeated over and over again.”

Pandora works a little like commerical radio. It’s free for most listeners because it comes with ads.

The streaming service has around 80 million users, way more than Spotify and Apple Music, but it’s not making enough money off of them.

“Pandora is struggling with the fact that there is an incredible amount of competition in digital music,” said BTIG media and tech analyst Richard Greenfield, “there’s now lots of companies entering the space that don’t need to make money on music alone — like Apple and Google.”

Analyst Rich Tullo from Albert Fried & Company says there could be a broad range of interest for Pandora. He points to traditional media companies, like CBS, which have radio experience  and to less obvious suitors like Netflix, which may be looking for something more to offer subscribers.