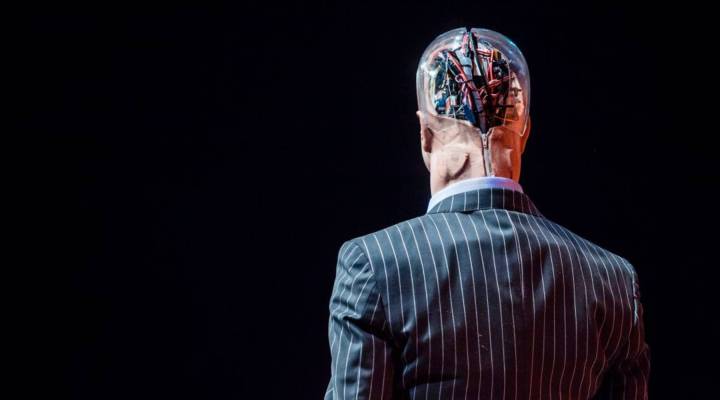 COPY
In his new book, "Genius Makers: The Mavericks Who Brought AI to Google, Facebook, and the World,” Cade Metz details the rebranding and rise of AI. Isaac Lawrence/AFP/Getty Images
Marketplace Tech Blogs

In his new book, "Genius Makers: The Mavericks Who Brought AI to Google, Facebook, and the World,” Cade Metz details the rebranding and rise of AI. Isaac Lawrence/AFP/Getty Images
Listen Now

As machine learning gets better, the conversation about robots taking our jobs gets more intense. Roy Bahat is the head of venture capital firm Bloomberg Beta, which has been looking into how automation will impact the workforce. He said, robots or not, American jobs are changing. The gig economy is rising as traditional, full-time work falls. And he thinks we should be focusing on adapting company culture and benefits to suit that. The following is an edited excerpt of his conversation with Marketplace Tech host Molly Wood.

Molly Wood: You’re studying technology’s effect on the future of work in the next 10 to 20 years. What’s been a big takeaway?

Roy Bahat: The idea of stability, I think, is a relatively modern idea. I don’t have the data to look backwards in time. But the notion that you should have a long-term relationship with a single employer paying you the same amount month after month, at best seems like a post World War II thing in the United States. And now we’re trying to figure out what would we do with the reality of kind of the fear that comes with not knowing where the next paycheck is from?

Wood: And so is it your impression, based on your findings, that those numbers are going to increase? That fewer people are going to have what we think of as traditional jobs?

Bahat: There is a lot of uncertainty. And therefore it’s possible that whole professions could wink out of existence. And that’s the effect of AI. You know, what about the self-auditing accountant or the self-lending mortgage officer? There’s basically every profession a possibility of some real automation. And I believe that we ought to be much more focused on the uncertainty than on what do we believe will happen.

Wood: And so that suggests laying a sort of new groundwork. Because if you think about it, a lot of our infrastructure, our life infrastructure, is tied up in salaried jobs, like health insurance, 401ks. Do you think that’s the way to start looking is how to adjust all of that infrastructure so that it can help people?

Bahat: Absolutely. I mean, we hung so much of modern American life on the idea of a single long-term job. You know, employers providing health care benefits, retirement benefits, a sense of identity, community, you know, making friends at work, a place to go to every day. And it’s pretty clear that under any scenario, we need an alternative to that.

Wood: So then what does your role become? Do you feel like, all right, I can now effect some change here?

Bahat: Yes, absolutely. I mean I think we have to. I think it’s incumbent on us to have a point of view on what kind of society should we be trying to build and how do we help consider these questions. The other way in which we play a role is that there’s a myth in many parts of the technology world that the pace of change is accelerating. But if you look at the economy as a whole it is totally untrue. In fact, I think we’re at much greater risk of stagnation. And a particular form of that is entrepreneurship, where the American dream in many ways depends on people inventing and doing new things. And the rate of new business formation has gone down steadily and dramatically. And so just helping people to be more confident being entrepreneurs and create and make new things is essential. And it goes back to that question of stability because it’s hard to take risk if you live in fear.

Wood: If we had way more free time — let’s say all of the things that can be done by a computer were being done by a computer — do you think that increases entrepreneurship? Will we create new things? Or will people just, you know, watch YouTube.

Bahat: I think it’s hard to know what people will do with a circumstance they don’t yet have. It’s really hard. And a lot of it depends on our culture. You know right now we have a school system that encourages people to conform to what a workplace will expect of them in the future and sort of loyally complete the tasks and advance step-by-step. And in a world where we expect that people will be more self-directed, which I think is absolutely the world under any of our four scenarios that you would move toward, in that world, teaching people how to think about the skill of — what should I do with my time? I guess my point is I don’t think it’s an automatic result. And of course there are going to both be people who sit at home and play video games and there are going to be people who go out and start the next businesses that create the next generation of success for the modern American economy.