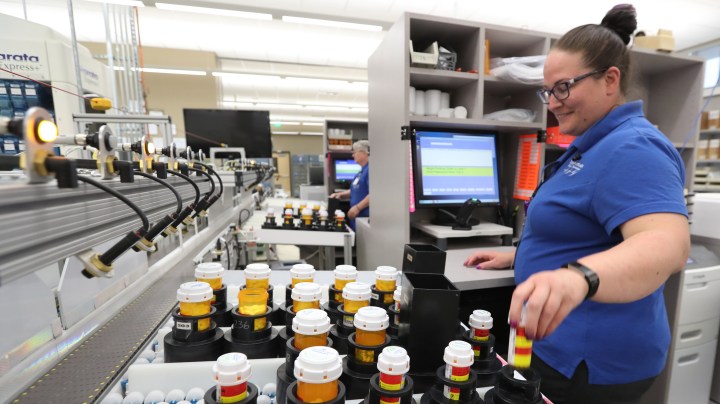 COPY
A pharmacy technician prepares prescriptions for packaging and shipping after being filled on an automated line at the central pharmacy of Intermountain Heathcare in 2018 in Midvale, Utah. George Frey/Getty Images

A pharmacy technician prepares prescriptions for packaging and shipping after being filled on an automated line at the central pharmacy of Intermountain Heathcare in 2018 in Midvale, Utah. George Frey/Getty Images
Listen Now

Men and women around the world essentially have the same odds of a robot or automation taking away their jobs in the next 10 years — about 20%. But a new report from McKinsey finds women will most likely have a harder time making the transition to this new economy for the same reasons women face career barriers now.

Marketplace’s David Brancaccio spoke with Kweilin Ellingrud, senior partner at McKinsey and co-author of the “The Future of Women at Work: Transformation in the Age of Automation.” Below is an edited transcript of their conversation.

David Brancaccio: By these calculations, I think men and women essentially have the same odds of a robot or automation taking away their job, that robots don’t discriminate that way. But the fallout of artificial intelligence, software, robots in the workforce nonetheless affects women differently from men.

Ellingrud: What we found out was two main insights from this research. The first was that 40 million to about 160 million women will need to transition occupations by 2030. It’s roughly the same ratio for men, but for women it’s going to be a much harder transition.

Brancaccio: What are some of the things that will make it harder for women to make the transition?

Ellingrud: Three things: The first is the right skills that match the jobs of the future. The second is physical mobility. And the third is access to and comfort with technology. So in skills, in particular, oftentimes women have the same or, in some cases, even more education but not always the right skill set for the jobs of the future. In terms of physical mobility, for instance, in India, 60% of employed women are in rural subsistence farming, and they don’t have the mobility from those rural areas to move into the cities where the jobs are going to be created. And the third thing is around technology. In terms of access to and comfort with technology, women also have a gap.

Brancaccio: Disruption itself is not a trivial process. It’s very difficult for a society.

Ellingrud: Disruption is hard, and that transition period is really challenging for women and men, and we think, in many cases, more challenging for women. But there is a silver lining. The jobs that remain will be higher skill, higher paid and, in many cases, more fulfilling. So a nurse, for example, will continue to have that patient interaction and the care for the patient, but will do a lot less data entry and forms review. The other element is that automation will also create jobs. So, for example, today there are machine learning coders who didn’t exist 20, 30 years ago. The next equivalent of that will also emerge. I think historically men have been better positioned for those frontier-type jobs — about 60% of those jobs have typically gone to men — but those are a new opportunity for both women and men going forward.