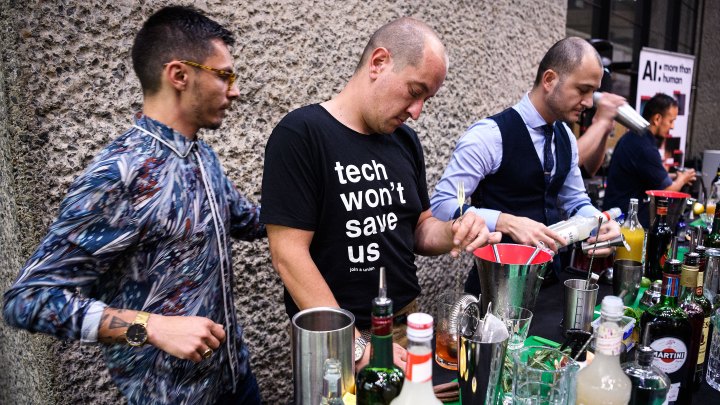 The pandemic may be accelerating automation and AI in the workplace: in other words, robots taking our jobs. That’s the word from the World Economic Forum, and other surveys of business executives suggest the same.

Automation is disruptive in good times, so what are we to do in a time like this?

Robots have been taking people’s jobs for a while — for decades actually. But the pandemic is making that happen faster, according to Saadia Zahidi, managing director at the World Economic Forum.

“It’s sort of accelerated that process because of the forced digitization that has occurred for so much of the workforce,” she said.

Forced digitization, like the apps that restaurants had to start using to take orders. But also a mass rethinking of how business should get done: 67% of executives in a McKinsey survey say they are accelerating adoption of automation and artificial intelligence. Zahidi said a lot of employees see it coming.

“Workers are realizing they need to take, to some extent, their fate into their own hands and do much more of that online learning and training,” Zahidi said.

One of those workers is Ryan Black, an actor in New York who’s in a six-month bootcamp to become a software developer.

“Everything needs software these days,” Black said. “It is so tough; it is melting my brain,” he said of the nine-hour-a-day class.

Which raises a point, not everyone is going to be like Black and just become a software developer. What to do about them?

“There are lots of important things we should be doing,” said Jared Bernstein, senior fellow at the Center on Budget and Policy Priorities. “First of all, we just have to make sure people can continue to make ends meet.”

He is, for the record, not convinced that automation is sweeping the country any faster than it has been, but he said we should be prepared for it anyway.

“One way to solve the problem today is to create shorter training programs that are less than, say, getting a two-year degree or four-year degree,” said Susan Lund, a leader of the McKinsey Global Institute.

On the other hand, she said, the U.S. has lagged behind other countries when it comes to helping workers adapt to an economy that’s changing beneath their feet.