COPY
Should we really be that threatened by robots? Jeff J Mitchell/Getty Images
Robot-Proof Jobs

Should we really be that threatened by robots? Jeff J Mitchell/Getty Images
Listen Now

A number of studies have suggested we’re living in a period where technology could be very destructive for American jobs. While automation will create 15 million new jobs by 2025, it’ll also wipe out 24 million jobs in the process, according to the research firm Forrester.

Our series “Robot-Proof Jobs,” explored the possibility of a robot takeover, and which jobs would and wouldn’t survive in the event of one.

But not everyone agrees with this argument. Heidi Shierholz, a senior economist and director of policy at the Economic Policy Institute, suggests that there are more pressing economic issues we need to focus on. She joined us to talk about some of these major threats to the labor force. Below is an edited transcript.

David Brancaccio: So you and your team are not into this “robots ate my job” thing.  It’s not the problem — why?

Shierholz: I am usually the most pessimistic person in the room, and I am not worried about the coming robot apocalypse. And the reason for that is that the footprints of automation being a problem are not showing up anywhere in the data.

Shierholz: Yeah. So productivity is where automation shows up in the data and it used to take multiple people many backbreaking hours to dig a ditch. Now it takes one person operating a hydraulic extractor. They can do it in an instant. So you can dig that same ditch in a lot less time. That’s productivity growth. Over the last 10 years, we’ve seen remarkably weak productivity growth. In fact, we are at post-World War II lows with our productivity growth. So we are certainly not seeing a speed up of automation that might make someone concerned about automation displacing too many workers.

Brancaccio: I know, but that’s a great debate in economics right now — all these geniuses scratching their heads about how we’re not seeing productivity grow the way we should. And among the theories not the only theory is that we’re not measuring it right. Maybe it really is growing.

Shierholz: The things that the Bureau of Labor Statistics, the Bureau of Economic Analysis has to measure — they’re tricky, and they’re trying to capture things like intellectual developments. These are hard things to measure, but they’re doing them pretty well.  It may be off a little bit one way or the other, but measurement problems are not what is driving our low measured productivity right now.

Brancaccio: Now, no one knows you to be a Pollyanna person. And I know that you don’t think that the labor force is in great shape. What should we then be worried about, if not the technology threat?

Shierholz: It’s a thing that we see over and over amongst economists. They want to say that the trends we’re seeing, like rising inequality, are actually a natural outgrowth of a modern economy due to something like automation or something else that is happening that we don’t have control over. But really what we’re seeing, what is causing our rising inequality, is deliberate policy choices. Like allowing labor market standards to erode, like the minimum wage and overtime protections, seeing unionization fall.

Shierholz: Right. Another key factor in there is globalization that has prioritized corporate profits while consistently exposing our workers to fierce competition. Those are the things that are driving our stagnant wages, our rising inequality. It’s not being caused by natural forces of automation.

Brancaccio: So if Alexa or Siri start doing the Dow Jones Industrial Average and the Nasdaq every day, and I lose my job to automation, I’m going to call you.

Shierholz: And I’ll say, “Oh there’s another good job somewhere else for you.” 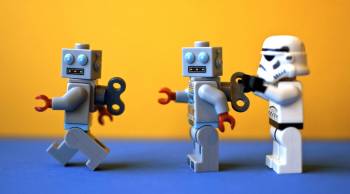 Robot-Proof Jobs 2: The winners of tomorrow