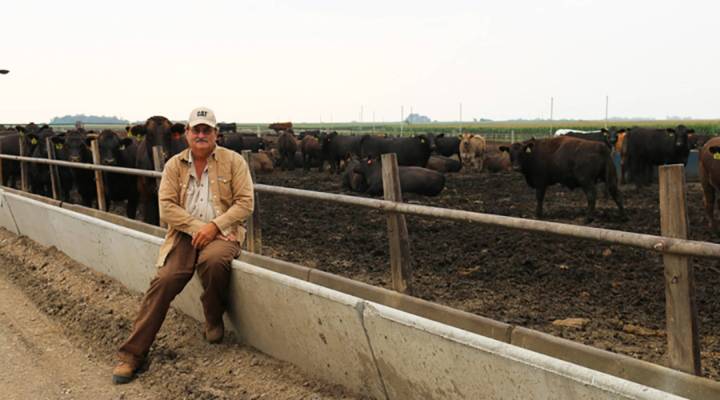 This is part one in our series on Nebraska’s immigrant labor, and how that workforce has helped shape the state’s economy. You can read part two here.

Chuck Folken has never been much of a coffee guy. A big, burly man with a graying mustache, he starts every morning with a huge mug of orange soda. “Tastes good. Keeps me up. Gets me going,” Folken said.

The jolt of caffeine gets him going to his massive feedlot. Folken has been working the family farm since he was a boy.

“I am the third-generation that’s been on this farm. I grew up here and lived here my whole life,” he said.

He’s from Leigh, Nebraska – where there are more cattle than people. Folken’s 450-acre farm is home to more than 8,000 cross-bred heifers and steers. They’ve been shipped from ranches all over the country for one reason: to be fattened up. Cattle spend about six months there, heads down in the feeding trough, until they’re big enough to be sent to the slaughterhouse. In addition to feeding cattle, Folken farms hundreds of acres of corn and alfalfa to produce the feed.

Chuck Folken and his family farm corn and alfalfa to make the feed for cattle.

To keep his multi-million dollar business running, Folken has long relied on immigrant labor. But with the Trump administration’s crackdown on immigration and Nebraska’s unemployment rate at 2.8 percent, he said it’s getting harder to find people to help.

“Especially somebody that wants to work physically,” he said. “We work outside, on foot and horseback all day.”

He said his workers need to be able to do things like wrangle cattle on horseback, spot the early signs of pneumonia and operate heavy machinery worth hundreds of thousands of dollars.

Even though he voted for President Donald Trump and said he supports him strongly, Folken said he disagrees “with almost everybody in Washington right now on this immigration policy.”

He said states like Nebraska couldn’t produce the billions of dollars in agricultural products they do now without the help of immigrant labor.

“Agriculture needs to have a skilled worker status,” Folken said. “Maybe it doesn’t take college education, but it still takes skill. I think we’re being left out and left short.”

With skilled worker status, agriculture workers may have an easier time getting visas that would allow them to stay longer in the country. Like many in his industry, he also supports providing a path to citizenship for undocumented workers.

After Folken’s cattle are fat enough, they’re sent to meat processing plants, which also depend heavily on immigrant labor. Immigrants make up more than a third of meat processing workers in the U.S.

At Cargill Meat Solutions in Schuyler, Nebraska – where many of Folken’s cattle are sent – most workers are immigrants. During a shift change, hundreds of employees from countries like Mexico, Guatemala and Somalia moved through metal turnstiles.

Some of them headed into a tiny white trailer, not far from the buildings that house the kill floor and production line. Inside, it looked like a kindergarten classroom – right down to the alphabet letters on the wall.

“I’m going to read the word, and you guys repeat after me,” instructed Kim Parsons, who lead the class of about 10 immigrants.

The course is part of Cargill’s Community Learning Center, where they also offer GED and citizenship prep classes. One of the most eager students in the class was 45-year-old Muluka Beker, a refugee from Ethiopia. She had just finished her shift.

“My job is tip tail and trimming,” Beker said.

All day she’s on her feet, trimming the tails off cattle — as many as 2,500 each shift.

When Beker came to the U.S. in 2005, she initially looked for jobs at retail stores like Walmart, but she had no luck.

Following the advice of a friend, she went to work at a meat processing plant. Cargill is her third plant job, and she makes more than $600 a week. Her husband works the night shift at the same plant. She joked that the only time they see each other is in bed.

Keeping workers in those tough jobs is one reason Cargill funded the center where Beker is learning English.

“Our goal is to help them either stay in their job or advance in their job,” Parsons said.

But Beker has set her sights beyond Cargill. She said she wants to improve her English so she can go back to school and someday get a better job in tech, away from the kill floor and the smell of blood.