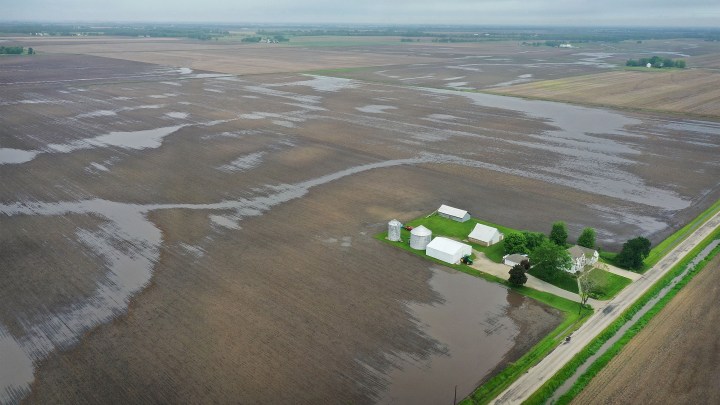 This planting season is the worst Kenny Reinke has seen in 19 years. Back in March, when he’d normally be fertilizing the soil on his farm in Neligh, Nebraska, much of his land was frozen. That land is still wet today, with small lakes in some areas.

“It’s too much water and too wet. We can’t get equipment across it,” he said, noting that he is now three weeks behind in getting seeds in the ground.

This spring has been one of the rainiest on record for the farm belt. It’s one more obstacle Reinke and other farmers are facing amid a shaky period of lower crop prices and falling income. Reinke fears flooding could lead to even more changes in coming months.

On his farm near Lake Creek, Texas, Alexander Frick is six weeks behind planting his corn and soybeans. He said it’s because he hasn’t gone five days in a row this spring without rain.

“You plant something and it gets flooded again, so you may have to go back and replant it,” he said.

About 400 acres of his land is basically a swamp, and the corn he managed to get planted is submerged.

“You just basically have to live with less income this year,” he said.

For Mitchell Hora, who owns a farm in Washington, Iowa, and runs an agricultural consulting business on the side, the best strategy for capricious weather is to make sure the soil remains strong. He’s telling farmers to get as much seed in the ground as possible even if they won’t be able to sell their crops on the usual markets.

“Try to harvest some of that as much as we can,” he said. “And utilize it for cover crop seed.”