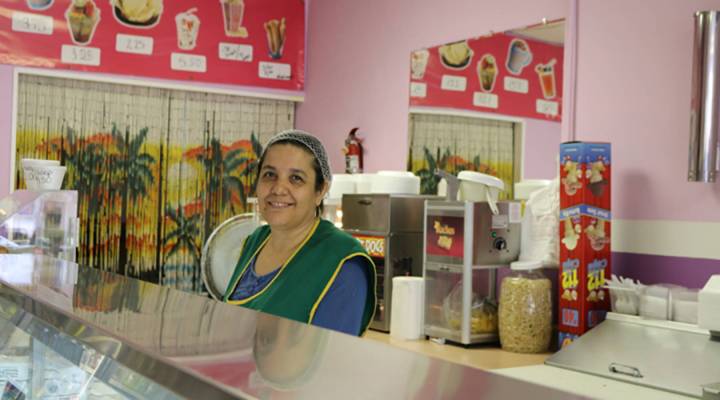 COPY
Norma Corral, an immigrant from Mexico, worked at Cargill's beef processing plant in Schuyler, Nebraska for a decade before opening up her business, Paleteria Oasis, in downtown. Daisy Palacios/Marketplace

Norma Corral, an immigrant from Mexico, worked at Cargill's beef processing plant in Schuyler, Nebraska for a decade before opening up her business, Paleteria Oasis, in downtown. Daisy Palacios/Marketplace
Listen Now

This is part two in our series on Nebraska’s immigrant labor, and how that workforce has helped shape the state’s economy. You can read part one here.

The first day of school has ended in Schuyler, Nebraska, and kids are trickling into the ice cream shop in the center of this small rural town. In one corner of the purple and pink parlor, there’s already a competition underway to see who can down their ice cream the fastest without getting a brain freeze.

Norma Corral, owner of Paleteria Oasis, is behind the counter of the store she said she opened 15 years ago to give young people a place to go.

“So my daughter could have somewhere to hang out,” she said. “Before, there was nowhere to go. Just to the park.”

Corral and her husband moved to Schuyler from Mexico in the early ’90s and began working at the Cargill beef-processing plant in town. After 10 years of long days slicing carcasses in near-freezing temperatures, Corral had had enough.

“I left because my shoulder began hurting a lot,” she said. “Being there for eight hours, making the same movements, your bones and the cold — it hurts.”

With the money she had saved from her job and a loan from the local bank, Corral pulled together $50,000 and opened the ice cream store. Since then, she’s expanded, and business has doubled.

If you walk into almost any store in downtown Schuyler, you’d hear some version of the same story of former plant workers turned entrepreneurs.

Many small businesses in Downtown Schuyler are owned by Latinos who once worked at one of the many meat-packing plants in Nebraska.

“The neighbors here at the 99 Cents store, they used to work at the plant and now have their business,” Corral said. “At the shop next to El Paisano, he works at the plant and his wife runs the business. So there’s a lot of us.”

In many small towns, Latino-owned businesses — if they exist — are often clustered together on a side street or in a neighborhood away from the main shops. But in Schuyler, where more than 60 percent of the the town’s roughly 6,100 residents are Latino, their businesses are the go-to places. They line the old brick roads and are marked by colorful signs in Spanish.

Schuyler, which is just over an hour’s drive from Omaha, was predominantly white until the late ’80s, when the Cargill meat-processing plant rolled back its wages, said Mayor David Reinecke.

“A lot of the white people didn’t want to work that job anymore because they weren’t making as much money, and through the course of maybe the next 20 years, Cargill had to get some people here to work the jobs.”

By 2004, Latinos were doing most of those jobs, and many white residents had left Schuyler. But the steady influx of immigrants — from countries including Mexico, Somalia and Thailand — has more than made up the difference.

“Unlike a lot of small, rural communities that are losing population, we’re going to be here 50 years from now,” Reinecke said.

Along with the population, the politics are shifting, too.

“Last year, I was elected as a school board member,” said Mynor Hernandez. “I think I was the first Latino elected for any public office [in Schuyler]. Period.”

Hernandez, whose parents worked in the meat-packing plant, said second- and third-generation kids are filling up the schools fast. Schuyler’s elementary school is the second-largest in Nebraska.

“They are adding five classrooms and a musical room to the high school right now ’cause we know that growth is coming, so we’re trying to stay ahead of those challenges,” Hernandez said.

Thirty miles down the road, people in the town of Fremont are trying to stay ahead of those challenges in a very different way.

Some residents have been trying to stop the development of a huge chicken-processing plant being built by Costco. The $300 million project will create 800 jobs.

“We’re worried about the air quality, influx of possible illegals coming in,” said 51-year-old John Wiegert, who grew up in Fremont.

John Wiegert, a Fremont, Nebraska, resident, is concerned about the new chicken plant being built in town.

More than 80 percent of residents in Fremont are white. For years, residents fought for an ordinance that would bar undocumented immigrants from renting homes. Bob Warner, a former city councilman, helped lead that effort. He said he doesn’t want his city to become another Schuyler.

“That was a farming community until that packing house went in there,” Warner said. “And it absolutely a shame what it is today. The downtown no longer what it used to be — a Nebraska town.”

Wiegert added that he’s welcoming of immigrants, “but we just want them to assimilate into our culture, speak our language, be legal.”

Even though some residents are still fighting the Costco plant, city officials are behind it. The plant will have a $1.1 billion economic impact on the state of Nebraska.

He said the plant will create a larger tax base, more homes and new business owners, who just might get their start at the processing plant.