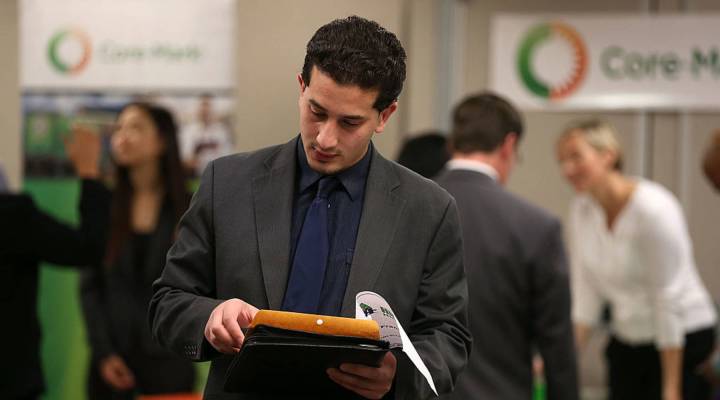 A job seeker prepares to meet with recruiters during a career fair in San Francisco, California.  Justin Sullivan/Getty Images

A job seeker prepares to meet with recruiters during a career fair in San Francisco, California.  Justin Sullivan/Getty Images

WASHINGTON (AP) — U.S. job growth slowed in August as employers added 156,000 jobs, still enough to suggest that most businesses remain confident in an economy now in its ninth year of recovery from the Great Recession.

The unemployment rate ticked up from 4.3 percent to a still-low 4.4 percent, the Labor Department said Friday. Job growth in June and July was revised down by a combined 41,000, leaving an average monthly gain this year of a solid 176,000.

Average hourly pay has risen just 2.5 percent over the 12 months ending in August. Pay raises typically average 3.5 percent to 4 percent when the unemployment rate is this low.

The job market has remained healthy even though the economy has grown at a subpar annual pace of 2.1 percent during the first six months of 2017.

Friday’s jobs report comes as Americans have grown more optimistic about the economy. A measure of consumer confidence in August hit its highest level in 16 years, the Conference Board said this week.

Inflation is low. Consumer spending in July rose at its fastest pace in three months. The stock market is up 10 percent so far this year. One measure of factory orders suggests that business investment is increasing.

Even the traumatic damage caused by Harvey around the Houston region is unlikely to break the national economy’s stride. Gasoline prices are rising as the flooding from Harvey knocked out refineries and ports, but any possible fallout will likely surface in economic reports over the next two months.

Still, in some respects, the U.S. economy appears less than vigorous. Auto sales have slipped. Fewer homes are being listed for sale. And the tax relief promised by President Donald Trump to boost growth faces an unclear path through a Congress that has failed to pass major legislation.

Some economists say a stable participation rate is a positive sign for the economy in recent years, since retirements mean it should in theory be falling slightly.

The leading source of job growth was in manufacturing, which added 36,000 jobs. Another 28,000 jobs came from construction.