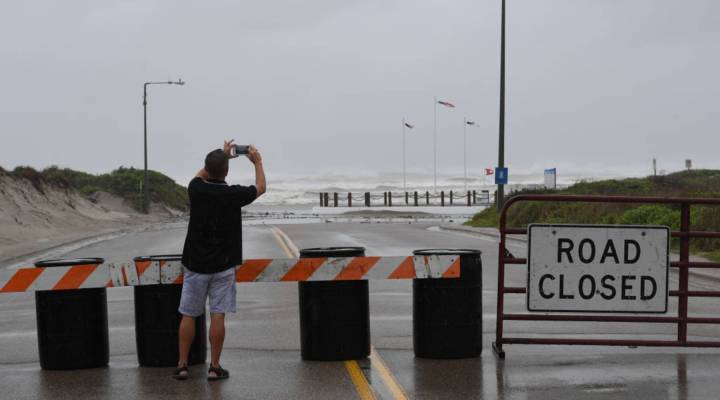 Hurricane Harvey was upgraded to a Category 3 storm Friday afternoon, as its eye was just off the coast of Corpus Christi, Texas. As with any storm of this size, lives are at risk and the property damage will surely be in the billions of dollars. Texas’ position as a key region for the American petroleum industry also means Harvey is going to have business costs that will be felt more widely. Andy Lipow is the president of Lipow Oil Associates based out of Houston. Host Kai Ryssdal called him up in New York, where he was stuck because of the storm. The following is an edited transcript of their conversation.

Kai Ryssdal: I should say up the top we have caught you in New York, which gets me to my first question: This storm kind of came out of nowhere, and I’m wondering how that’s affecting preparations down on the Texas coast?

Andy Lipow: Well, if you’re a refinery in Corpus Christi, Texas, you’ve already shut down your facilities because landfall is expected to make it’s way there overnight. If you are a refiner or petrochemical plant in the Houston area, we see some trimming back of operations, because it’s difficult for the tankers to unload imported crude oil and make its way through this storm system.

Ryssdal: When you say shut down, I imagine you can’t just flip a switch and take off. That’s probably a process, as is restarting refineries after this whole thing is done?

Lipow: Well, that’s exactly right. When refineries need to shut down their facilities, they make that decision about 48 hours prior to the estimated landfall. When they’re starting up, of course, it’s going to depend on how much damage is sustained. So if we have a Category 3 hurricane approaching the Corpus Christi area, which is going to impact flooding, the power supply, the ability to get workers back to the facility, those refiners might be down for up to three weeks.

Ryssdal: Well, that seems like a very long time. What does that translate into in terms of the supply of gasoline getting out into the rest of the country, because something like a third of the capacity refining capacity we have is down there?

Ryssdal: This storm is predicted to be more of a water event, I think is what the meteorologists say, instead of a wind event, right? There’s going to be tidal surges, there’s going to be all this rain. How much of a problem is standing water for these refineries, who could conceivably be flooded out?

Lipow: Well, it can be a very significant problem. The last forecast I saw was for 28 inches of rain in the Houston area and up to 40 inches of rain in some of the surrounding counties. The good news is it’s going to happen over a four to five days, so if the refinery has enough capacity to move that water off its grounds, it’s not much of an issue. But if you get deluged by rainfall in a short period of time and that water rises, you tend to find your equipment becomes submerged, and then you have a more significant event, because all that equipment has to be repaired and that can take weeks and months.

Ryssdal: Right. What are they telling you about when you’re going to be able to get back to Houston?

Lipow: So I was expecting to go this Sunday, and I talked to people down in Houston. They said there’s no reason to come down here, so I fully anticipate getting back there Thursday morning.

Ryssdal: Well, best of luck to you sir.