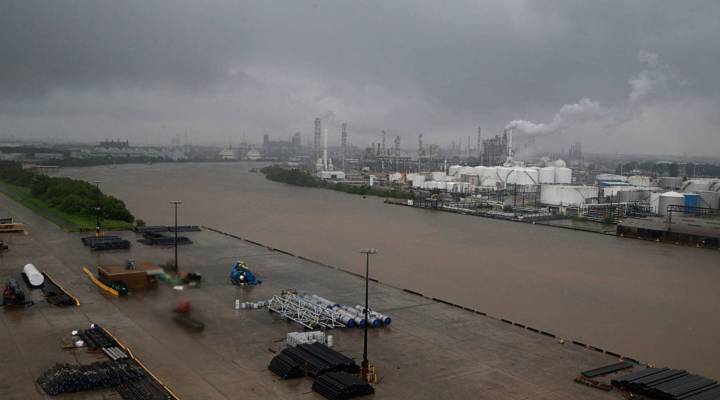 Flood waters rise today by the refinery section of the Houston Ship Channel. The city is battling Harvey, now a tropical storm, and flooding. THOMAS B. SHEA/AFP/Getty Images
Listen Now

One of the most obvious ironies with Hurricane Harvey is that it has rendered the nation’s energy capital powerless. Some of the nation’s largest refineries have been taken offline as a precaution in advance of the storm, which has now been downgraded to a tropical storm.

The port of Houston and key shipping lanes are out of business for now. Gasoline prices are nudging up a bit for now, but the energy industry, the markets and residents are dealing with big unknowns as far as how long it’ll be before critical facilities are back up and running.

Some 15 percent of the country’s refining capacity shut down for the storm. Today, wholesale prices for gasoline rose 7 cents a gallon, which is not a crisis-level spike; the country has more than 20 days of spare inventory.

But no one knows when the refineries can restart; the question is whether they have flood damage.

“Electrical systems, pumps, things like those — if those remain underwater, have seawater contamination for any length of time, we could potentially see extended outrages, like we saw during Katrina,” said John Auers, executive vice president at energy consultancy Turner, Mason & Company.

When Katrina hit, some refineries went dark for nearly a year, Auers said. Were that to repeat, it could crimp supplies in key places that rely on the Texas coast, like the upper Midwest and the Northeast.

For now, there are no reports of big refinery damage in the country’s critical spot for turning petroleum into fuel, petrochemicals, pharmaceuticals and plastics.

“Those are all leaving by tanker,” said Tom Seng, who teaches energy business at the University of Tulsa. “The Port of Houston and the Houston Ship Channel at the present time are still closed. So all these massive movements of billions of gallons of product essentially are kind of at a standstill.”

As the floodwaters in Houston continue to rise, the Louisiana coast, another critical area for refineries, is also watching Harvey’s path.

“With the hurricane looking like it’s heading back out into the Gulf of Mexico and could start moving up the coast towards Beaumont and even Louisiana, we could see some of that production go offline in the days to come,” said Jenna Delaney, oil analyst at PIRA Energy Group, a division of S&P Global Platts.

Offline for how long? We may not know until the waters recede and the real damage is assessed.