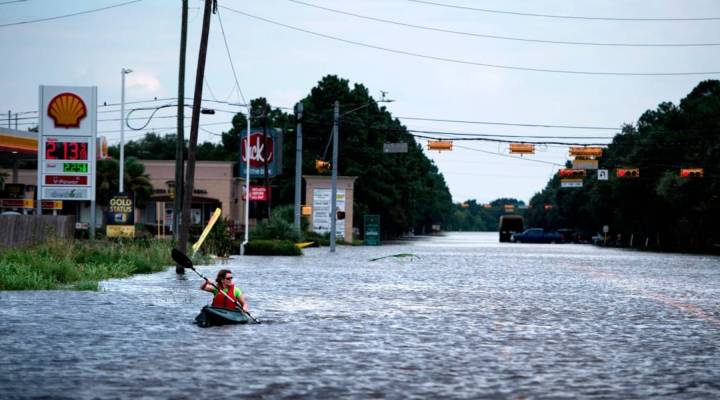 COPY
A woman paddles down a flooded road while shuttling deliveries for her neighbors during the aftermath of Hurricane Harvey on Aug. 30, 2017 in Houston, Texas.  BRENDAN SMIALOWSKI/AFP/Getty Images
The long recovery: 2017’s biggest natural disasters

A woman paddles down a flooded road while shuttling deliveries for her neighbors during the aftermath of Hurricane Harvey on Aug. 30, 2017 in Houston, Texas.  BRENDAN SMIALOWSKI/AFP/Getty Images
Listen Now

Houston was inundated by waters from Hurricane Harvey in August, when images proliferated on our TV screens of cars floating in water and residents wading through flooded homes. The mayor of Houston, Sylvester Turner, appointed a former Shell Oil Co. CEO to be Houston’s “recovery czar.” Marvin Odum helped Shell recover after Hurricane Katrina in 2005, and joined Marketplace to talk about what recovery looks like for Houston.

Marvin Odum: There is, in a way, two cities right now. There’s the city that was able to recover very quickly. I mean, Houston opened up for business two weeks after the storm; we were up and running. The danger is that what gets lost in that picture are the vast number of people and pockets and neighborhoods that have been severely impacted by the storm. And that’s where we need to maintain the focus of this recovery, and that’s where we need to maintain a certain amount of public awareness as well so that we recognize there’s still a tremendous amount to be done.

Kimberly Adams: There was a lot written after the hurricane about the way that Houston had expanded in recent years, and how that development contributed to the severity of the damage. What are the lessons learned in that regard and what’s going to change?

Odum: The mayor’s been extremely strong in Houston with the perspective that we can’t just build back what we had before. And you may want to use the phrase “building forward.” So the idea that we have to take that money that we have to recover from this storm and use it to both build better infrastructure, to do things like buyouts — buying out homes where there’s no amount of change to bayous and other infrastructure we can put in place that are going to protect those homes — and also then to exercise the levers that the city has to do things differently, like building codes. How are things built in the future, and how are flooding events taken into account?

Adams: That sounds like you are needing to have conversations with people where you basically tell them their neighborhood is not coming back.

Odum: There’s a number of, as you can imagine, interested parties in every aspect of this recovery. The one that really hits home the most is a neighborhood, and those people in that neighborhood. And really what’s incumbent on us in the city is to look at the recovery across Houston on a neighborhood by neighborhood basis, and then helping people make their decisions and understand what their options are on a block by block, house by house basis. That’s the granularity that we have to go to in this recovery to make sure it’s done correctly.

Odum: 2018 will be a critical year in the recovery. I will flag that, you know, probably the number one issue as we leave ’17 and go in 2018, is what is going to be the amount of federal funding that comes into the Houston area for recovery. The potential magnitude of that funding could be much smaller than what’s required, and that is a huge concern.