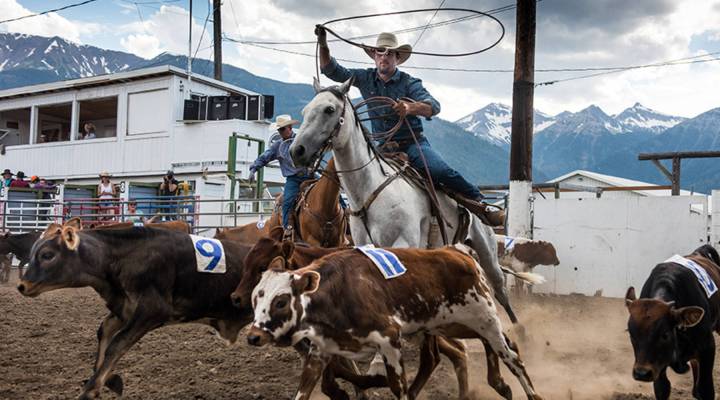 Especially in the West, a lot of farm and ranch towns still hold junior and ranch rodeos for locals to show off their skills. There are more than 600 pro rodeos sanctioned by the Professional Rodeo Cowboys Association nationwide — often with country music performances, hundreds of competitors, and thousands in prize money in the pot — over several days of bull riding, calf roping, barrel racing and other events.

Rodeo peaked in the early 1990s, according to PRCA number crunching, after which there was a slow decline in pro events and competitors. The sport took a further hit in the economic downturn — with fewer rodeos staged and some competitors hanging up their spurs.

“The number of rodeos has declined since the ‘90s,” said Casey Beard, general manager of the 77-year-old Pendleton Round-Up, one of the most popular small-town rodeos in the country, held every September in Eastern Oregon. “Part of that is the general decline in rural America. It’s more difficult for small communities to maintain a PRCA rodeo. As major employers in these small communities went out of business or consolidated operations, a lot of the major sponsors went away.”

But the Round-Up still draws 17,000 fans on a typical night and often sells out. “We’re continuing to see strong attendance and our retail operations continue to grow year over year,” Beard said.

Rodeo promoters say the improved economy, more promotional activity by sponsors and the PRCA, and the drawing power of big-name country music stars and bigger prize money at top-drawing rodeos have all contributed to increased audience interest.

But it’s a tough sport to make a living in. Scott Burks is a competitive team roper, an event in which two riders work together to rope a steer by the head and hind legs, he’s also a pro rodeo announcer. Every summer he runs a teen Rodeo Bible Camp in Southwest Washington, in association with the Fellowship of Christian Cowboys.

The Chief Joseph Days Rodeo kicked off earlier this summer in Joseph, Oregon. It’s a small ranching and tourist town ringed by snowcapped peaks in Eastern Oregon near the Idaho border. The event packs Main Street with pickup trucks and fills every hotel in town for four days in late July.

Each night, rodeo announcer Jody Carper boomed the opening ceremonies over the arena’s PA system, as half a dozen rodeo princesses galloped and trick-turned around the ring, flying American flags behind them.  After a prayer, a tribute to fallen American heroes and a rousing rendition of the National Anthem, two hours of riveting rodeo ensued, set to a rock ‘n’ roll meets country soundtrack.

For small towns in rural areas like Eastern Oregon, the rodeo serves as a once-a-year celebration and family reunion, drawing people from hundreds of miles around. There are teen dances and a kiddie parade down Main Street, bars in town are packed every night and local ranchers stroll the rodeo grounds during the day to check out the rodeo stock (bulls, calves, steers). In the wee hours after the last night of competition, there’s an all-you-can-eat cowboy breakfast — pancakes, steak, eggs, biscuits and gravy — that goes until dawn.

“The rodeo business has kind of picked up,” said Terry Jones, president of Chief Joseph Days. “We seat about 4,500 and we’ve seen a pretty good increase in attendance over the last seven to eight years. We usually sell out on Saturday night.”

Whitney Knowles came to the rodeo with her two-year-old daughter, Lydia, to see her husband Blake Knowles compete. He’s a steer wrestler, and makes a living on the rodeo circuit, supplemented with income from the couple’s ranch in Heppner, Oregon.

“We’re pretty lucky,” she said. “His parents are right there about a mile up the road and they do a lot for us. His dad was a very good saddle bronc rider and his mom ran barrels as well. It’s passed down generation to generation.”

The rodeo has also drawn generations of the Native American Nez Perce tribe back to Joseph. The Wallowa Valley (where Joseph sits) and the surrounding mountains are considered the heart of the Nez Perce homeland.

Today, Nez Perce families come to Joseph from all across Eastern Oregon and Western Idaho. They set up a tent and teepee encampment on the rodeo grounds next to the arena, sell fry bread from a roadside stand and perform Indian dances and drumming for tribal members and spectators.

Nez Perce dance and drumming at the tribe’s Chief Joseph Days encampment on the rodeo grounds.

Skyler White Temple works for the Nez Perce Department of Fisheries Management in Lapwai, Idaho, the headquarters of the tribe’s reservation. He’s been coming to the Chief Joseph Days Rodeo since he was a boy. His grandfather and uncle were competitive rodeo team ropers, and he said most of his friends and relations are as comfortable on horseback as behind the wheel of a pickup.

“I was talking to my daughter on the way here, saying ‘this is where we’re from.’ So you have the whole historical aspect of this being our land,” said White Temple. “At the same time, it’s just a big family event. They don’t do the carnival anymore, but our grandmas and grandpas have been coming over here for years.”

For some families, community is the main draw. Rancher Collin Cunningham walked down Main Street in the Kiddie Parade alongside his daughter JoLee, one morning during the rodeo. She sat comfortably in the saddle of her favorite horse, dressed as a ballerina. She won third prize in the parade.

“These are still very much skills that are used on the ranch,” Cunningham said of events like calf roping and steer wrestling. “Especially in this county, where the country dictates that a lot of the work has to be done with a horse, because it can’t be done with a four-wheeler or a pickup.”

JoLee Cunningham and her dad Collin marched in the Chief Joseph Days Kiddie Parade down Main Street. JoLee won third prize for her costume as a cowgirl ballerina.

For Joshua “Toad” Tarbin, rodeo is nothing less than a way of life. He was a world ranked bull rider before doing three military tours in Iraq, which left him with injuries that ended his career as a rodeo competitor. Now he does some of the most dangerous work in the arena — what he calls “cowboy lifesaving,” helping riders get out of the way of angry bulls and steers. “That cowboy gets hung up on a bull, you go in and get him out, no matter what — that’s the name of the game,” he said.

Tarbin’s eight-year-old daughter is already competing in local events —“She’s my mutton buster, she’s won one buckle already,” he said. “It’s fun to be with cowgirls and I like horses,” his daughter chimed in. “My dad was a cowboy — an all-around champion — and I’ll tell you what, as a single dad raising girls, this is just about as tight a community as you can get. It’s all family,” Tarbin said.

Teah Jones is the daughter of rodeo president Terry Jones and a former Chief Joseph Days Rodeo princess and Miss Rodeo Oregon. But she’s not sure how head over heels she wants her preteen son, Tegan, to fall into the sport.

“My eleven-year-old is just starting to bull ride,” she said. “I’ve tried to talk him into roping or something with a horse. I was hoping maybe he would decide the bull riding wasn’t such a great idea. But instead it went exactly the opposite. The rough stock is hard on moms — watching your kiddo get on an animal that outweighs him by a few thousand pounds — it’s a little nerve-wracking.”

Tegan said he’s sure though that he wants to be a rodeo bull rider.