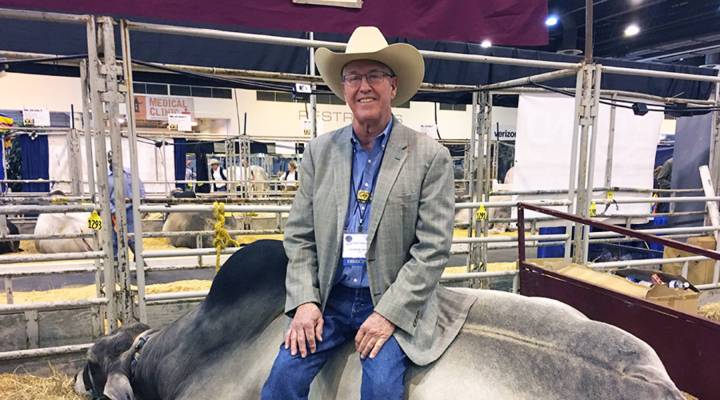 COPY
Coleman Locke, president of J.D. Hudgins Inc., and one of his Brahman bulls. Andrew Schneider

President Trump has walked back his latest threat to pull the U.S. out of the North American Free Trade Agreement, saying he still wants to try to renegotiate the trade agreement with Canada and Mexico. But he warns he’s ready to pull out if talks don’t produce “a fair deal.” That’s making a lot of industries that depend on cross-border trade nervous. Among the most concerned: cattle ranchers.

For three weeks each year, more than 2 million people converge on Houston for the city’s annual Livestock Show and Rodeo. Many come for the entertainment: country music stars, bronco busting and bull riding.

But this is also a trade show, one that attracts buyers from all over the world and U.S ranchers ready to sell to them, such as rancher Coleman Locke of Hungerford, Texas.

Mexico has long been one of the most important foreign markets for J.D. Hudgins. The family ranch sells cattle south to Mexican ranchers who breed them with their own stock. Then they sell the calves back to the U.S., where the cattle are fattened, slaughtered and sold for beef.

“So the profit on those animals will be made in this country,” Locke said.

And the largest foreign buyer of Texas beef? Mexico.

Cattle on display at the Houston Livestock Show and Rodeo at NRG Center.

“We export, as the U.S., about $975 million to Mexico, and about $758 million to Canada [per year],” said economist Luis Ribera, director of the Center for North American Studies at Texas A&M University. “That’s just beef and veal.” In fact, Mexico is now the third-largest export market for American beef. Only Japan and South Korea buy more.

NAFTA has done a lot to stimulate the U.S.-Mexico cattle and beef trade, according to Kelley Sullivan, co-owner of Santa Rosa Ranch. Her family, like Locke’s, has been in the beef industry for more than a century.

“The export market is very, very important to us, so we keep an eye on it, closely,” Sullivan said. “Prior to, for example, NAFTA being passed, there was a 25 percent tariff on our beef.”

Sullivan said she isn’t too concerned about the potential for trade disputes between the U.S. and Mexico to hurt her business.

“What we do know is that President Trump is a businessman and understands the importance of having markets available for products.”

“I feel confident that he will have our beef organizations at the bargaining table and will be taking advice from them,” he said.

Kent Bacus is one of those men at the bargaining table. Bacus is director of international trade for the National Cattlemen’s Beef Association in Washington, D.C. And he’s not nearly so optimistic.

“Quite frankly,” Bacus said, “we’re worried that if there are any significant changes made to NAFTA, it’ll jeopardize our ability to remain competitive.”

Bacus said Trump has already dealt beef producers a blow by pulling America out of the Trans-Pacific Partnership. The TPP would have lowered trade barriers to Japan. He notes that Australia, America’s lead competitor there, enjoys an 11 percent tariff rate advantage over the U.S.

“As a result,” he said, “we’ve been losing about $400,000 per day in potential sales. And the good thing about TPP is it would have eliminated that gap and leveled the playing field on Day 1.”

Bacus noted that beef has long been a target for retaliation in trade disputes, particularly with Mexico. He’s lobbying hard to make sure the administration understands what’s at stake with NAFTA. Because if that trade agreement unravels, his members will be among the first hurt.