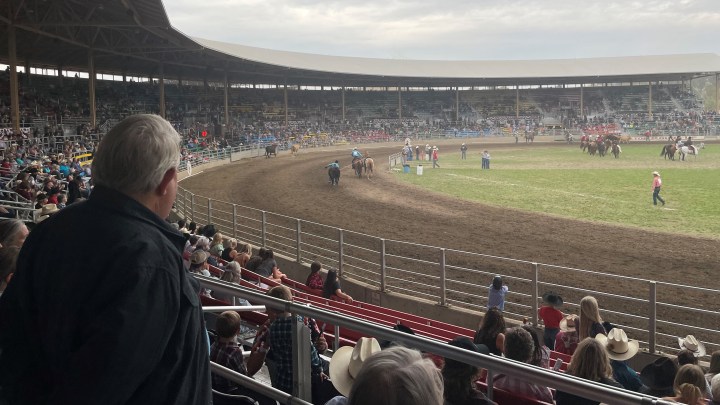 COPY
The Pendleton Round-Up arena can hold about 16,500 fans — about the whole population of the town. On several days this year, ticket sales topped 10,000. Mitchell Hartman

The Pendleton Round-Up arena can hold about 16,500 fans — about the whole population of the town. On several days this year, ticket sales topped 10,000. Mitchell Hartman
Listen Now

We’ve just been through a summer of things coming back from COVID-19: from weddings and family reunions, to concerts and sporting events — including rodeos.

Rodeos are important to a lot of rural communities, especially in the West and Midwest. Folks come from hundreds of miles around to compete, provide the cattle and horses, watch from the grandstands, and fill local hotels and restaurants.

When rodeos big and small were canceled last year, it came as a big blow. This year, some early-season rodeos were canceled, but a lot of rodeos came back in the summer — coinciding with the surge of delta variant cases in many places where rodeo is king.

Pendleton, Oregon, is one such place. It’s a small farm-and-ranching town about three hours east of Portland, with a big rodeo: the week-long Pendleton Round-Up.

Its grounds sprawl over more than 40 acres near downtown. The arena could hold everyone in town — more than 16,000. There are cowboy breakfasts, a Western pageant and a parade.

Wanjang Chuol, his wife and four kids are Round-Up regulars. They drove about two hours from Marysville, Washington, to see the parade and rodeo. “My family comes here every year, since 2009,” Chuol said.

Except, of course, last year, when the 110th Pendleton Round-Up was canceled due to COVID-19.

“Given what we were faced with, I think it was the right call. It was hard to not have it, it was really painful,” Chuol said, adding that, this year, with the adults in the family fully vaccinated, all of them recently recovered from COVID-19 and wearing masks: “It’s time to get back to living our lives.”

As fans entered the Round-Up arena, there were signs that said “Masks, Face Coverings, Face Shields are Required at this Location” — by order of the Oregon Health Authority. But few of the ticket-takers and even fewer of the fans sitting in the grandstands were wearing them.

Joy Anderson and Libby Baker drove about 250 miles from Bend, Oregon, to see their favorite events: “Broncs and bulls, saddle, barebacks,” Anderson said. “That’s the best because those are green-broke horses — I don’t even know how they get on ‘em,” added Baker.

Those events can be dangerous for the cowboys competing. But what about the danger of coming to the rodeo, with COVID cases surging? “I thought about it,” Anderson said. “It’s a risk, I decided to do it.”

“I make my own choices,” Baker said, pointing out that she had a mask in her pocket but wasn’t wearing it because the seats weren’t full nearby. “I’m vaccinated. I think I’m safe for other people, and I take my chances.”

Tens of thousands of fans took their chances, boosting the local economy in the process. Ticket and vendor sales, hotel, restaurant and bar tabs bring in $50 million dollars in a typical year, according to Pat Reay, the event’s publicity director.

Some locals didn’t think it was worth the risk, though, as COVID cases had been at record highs statewide, cases of the delta variant had been surging in Umatilla County and less than half of residents were fully vaccinated.

Carol Hanks, for 41 years the owner of The Great Pacific, a Pendleton coffee and wine shop, was in that category. “I think it is too scary still and too dangerous still to have big events,” she said.

Hanks said her business was up a little during Round-Up, but “we, of course, are upholding the mask mandate. And that causes a great deal of controversy. We lose a lot of customers because of that.”

The director of the Umatilla County Health Department, Joseph Fiumara, wasn’t surprised by the controversy. “We always hope for more compliance; we’re also realistic,” he said. “I didn’t expect everybody at Round-Up to suddenly start wearing a mask after they spent the last five months fighting against having to wear a mask.”

Following a surge in delta variant cases and hospitalizations linked to an outdoor music festival in town in mid-July, the health department beefed up messaging and vaccination leading up to Round-Up. It also helped set up a COVID vaccination tent at Round-Up, in partnership with Yellowhawk Tribal Health Center on the Confederated Tribes of the Umatilla Indian Reservation.

Yet, the indoor bar at Round-Up was wall-to-wall cowboys; while many vendors wore masks, most other folks didn’t. “I would have to agree with you,” Reay said, “there was not a lot of masking. But there was also a lot of drinking and eating, because I know our vendor numbers and our beer numbers, at least, are way up.”

Given how packed those bars and dancehalls were during Round-Up, County Health Director Fiumara was worried as Round-Up wound down for its final weekend.

“Going into the event, we were nervous, with our case numbers being as high as they were,” Fiumara said. “A lot of us expect there’s going to be an impact in the numbers, you know, just the number of people around. And I probably won’t breathe easily until about four weeks after the event’s over.”

He said one thing giving him hope: Because many locals have already contracted COVID-19, there are fewer people to infect.