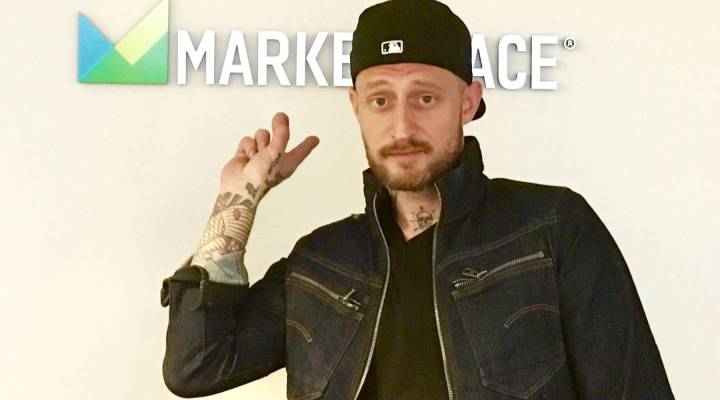 No matter who you are, you probably had a job that changed you, or you learned a financial lesson that stuck with you. Each week, we ask actors, writers, comedians and musicians to open up and tell us about how money played a role in their life. This week, chef Michael Voltaggio visited us in our Los Angeles bureau to fill out our questionnaire based on his experiences with money.

Dinner at one of my restaurants.

I’m a car fanatic, so I guess I would say that, but more importantly I would say a plane ticket, to just go somewhere and experience something different.

I think in a lot of cases it is, yeah, for sure. It’s very chaotic, there’s a lot going on, and in some cases, before the kitchen walls came down and everyone was sort of in front of the audience, you know, you were sort of the rodeo clown back there. You’re the guy that wasn’t really getting the credit, you were just that weird person that was in the kitchen making this food. The work was getting done, but the praise was happening on the other side of the wall.

What’s the hardest part of your job that nobody knows about?

I think the hardest part of my job today is balancing everything. Being more than what I signed up to be. I signed up to be a cook. I eventually wanted to be a chef, but I didn’t sign up to be a CEO, a president of a company, a television personality. So it’s about figuring out how to do all these things I was never really educated to do.

When did you realize that being a cook or a chef could be a career?

It’s the only job I’ve ever had. Since I was 15 years old, I started working in restaurants. I’m 37 years old now and I’ve only been paid to be a chef, or a cook, for that matter. Understanding that there was something more to working in the food service industry than just working in the food service industry … I remember when I told my parents, “I’m not going to go to college, I’m going to go to this culinary apprenticeship, or I’m going to work in restaurants,” and it was like “Oh yeah, I kind of figured you’d end up in the food service industry.” And now it’s like “Wow, we’re really proud of you … we didn’t make it that way,” and I remember seeing the executive chefs of the places where I worked and thinking, yeah, one day I would have a decent job. I didn’t think I would have such an amazing career.

My first job I was a busboy at a Holiday Inn Hotel in Frederick, Maryland, and my brother was the sous chef in the kitchen. I wanted to work in the kitchen, and I remember the other sous chef and my brother said, “OK, come in tomorrow dressed a cook’s uniform, with the apron, the hat, the chef jacket, the whole thing, and we’ll start you in the kitchen on the garde manger, which is the cold station.” So I showed up the next day, I’m all excited, I get up early, I get to work, I’m 15, 16 years old, and I’m dressed like a chef. Well, Bryan and the other chef were both off, and the executive chef was there, and he looked at me and he basically said, “What is this, effing Halloween? What are you supposed to be?” They never told him that I was coming in not as a busboy the next day, but as a cook in the kitchen, and so he just from that day on, mopped the floor with me.

But clearly that was inspiring to you in some way.

I didn’t love so much the … well, maybe I did love the drama that was in the kitchen, maybe there was a little bit of me that enjoyed, not the yelling and screaming, but the intensity of it. But then when the creative process was exposed to me and I could see, wait a second, I can take all of these ingredients over here, and I can make my own dish out of it if I want to, and I can sell it in the restaurant tonight, and that’s OK? That empowerment, at that age, and being able to experience that, and then have people hopefully say that they enjoyed it, for me was one of the most inspiring things I’ve ever experienced in my life.

I collect a lot of cookbooks, and I know that’s an obvious one, but it helped me a lot. Especially last year. I was cooking in a lot of different countries, and I would show up and try to understand the cuisine there, and so the first thing I would do is go to a bookstore and try to find a cookbook in English. I now have hundreds of cookbooks.

I think everyone should probably own a Vitamix blender. That piece of equipment is in every professional kitchen around the world, and even if the plugs are a little bit different in different places, you can’t do without that blender.

Do you remember the first set of knives you ever bought?

Well, my mom bought me a set of Global knives, and I remember because there was a knife that I really wanted, and it was sort of a deiba, which is like the Japanese fish butchering style knife, and I really, really wanted that knife, and my mom purchased it for me. But then later on I learned that you can’t give a knife as a gift. There’s supposed to be a transaction that takes place, because if you give a knife as a gift, it cuts off your friendship. And so every time I gift a knife to someone — and I do this with my cooks a lot, because a lot of companies send me knives and things like that, or I buy myself new knives — I’ll sell my knives, that are not cheap knives, they’re fairly expensive, several hundreds of dollars, and I’ll sell them for like a dollar to my cooks or a quarter. So anytime somebody gives you a knife as a gift, make sure you give them a coin, or a quarter, or a dollar, so that there’s a transaction so it doesn’t cut off the friendship.