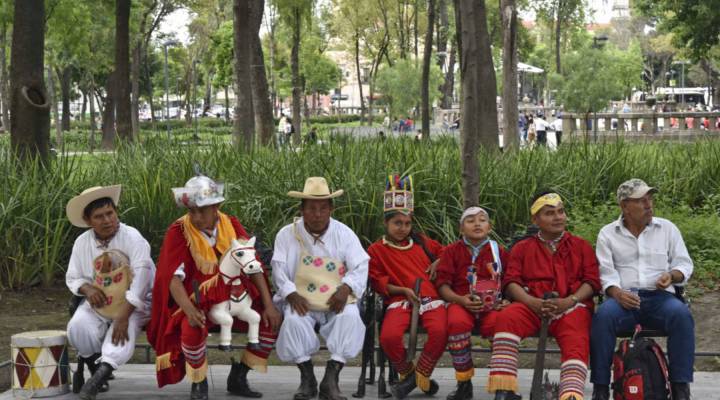 COPY
Dancers dressed in traditional costumes protest against NAFTA in Mexico City on August 16. 2017, the first day of NAFTA re-negotiations between the U.S., Canada, and Mexico. YURI CORTEZ/AFP/Getty Images

Dancers dressed in traditional costumes protest against NAFTA in Mexico City on August 16. 2017, the first day of NAFTA re-negotiations between the U.S., Canada, and Mexico. YURI CORTEZ/AFP/Getty Images
Listen Now

The U.S., Mexico, and Canada are finally in talks to renegotiate the North American Free Trade Agreement, which was a key Donald Trump campaign promise. The virtues of free trade have come under increased scrutiny, putting many world leaders’ stances on globalization on unsure footing. Our Marketplace series, Trade Off, has more stories on the changing face of free trade.

For many businesses located on the U.S.’s land borders, NAFTA is supremely important. It has the potential to dictate the kind of trade relationships the U.S. has with its neighbors, and despite the legitimate downfalls of NAFTA, eliminating it would affect a great deal of American business owners and workers.

Dianna Williams-Hefley is a business owner in El Paso, Texas. Her shop, The Desert Gypsy, sells imported hand-crafted artisanal goods from Mexico. The border plays an enormous role in her daily business operations and, ultimately, her livelihood.

She is hoping that key components of NAFTA stay the same, and that the border tax that the Trump administration has threatened to impose on goods imported from Mexico will not be part of the new negotiations.

“The part that concerns me, of course, are the tariffs that might be imposed. If a tax of 20 to 35 percent were added to the merchandise that I cross, that would basically put me out of business. I’m still optimistic that small businesses will not be affected.”

On our northern border, the goods crossed differ slightly. David Bruce is chief financial officer for Vaagen Brothers, a lumber company based in Colville, Washington, which has sawmills both in the U.S. and Canada.

Lumber is not regulated by NAFTA; it is governed by a separate trade agreement between the U.S. and Canada. In April, the Trump administration imposed tariffs on softwood lumber imported from Canada, and Bruce is worried that lumber will be used as leverage in the negotiations of NAFTA, even if it is officially excluded from the trade agreement. He says Canada has more at stake with its production of lumber than the U.S. does, meaning both sides are approaching the trade relationship with slightly different goals.

“Canadian imports into the U.S. typically make up anywhere from 30 to 35 percent of the supply for the U.S. market. And the U.S. has always argued that the Canadians subsidized their raw materials, based on the way they sell their timber to industry. So that’s been looked at as unfair, either through anti-dumping on the lumber side, for selling it cheaply, because they have a cheaper raw material, and as well on the countervailing duty side.”

To hear more from Bruce and Williams-Hefley, click on the audio player above.