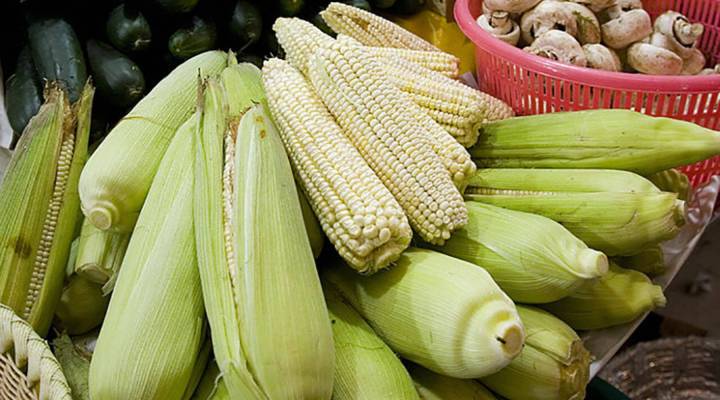 COPY
Corn cobs are displayed for sale along with other vegetables in a market in Mexico City. OMAR TORRES/AFP/Getty Images
NAFTA Explained

Corn cobs are displayed for sale along with other vegetables in a market in Mexico City. OMAR TORRES/AFP/Getty Images
Listen Now

In October 1993, Janet Reno, the U.S. attorney general, was giving a speech at the University of California, San Diego, just 20 miles from the Mexican border.

She was touting the benefits of the North American Free Trade Agreement, or NAFTA, which hadn’t been ratified yet. And she said the trade deal would result in fewer Mexican people crossing the border to work illegally in the U.S.

At the time, workers in Mexico were taking home just 30 percent of what U.S. workers earned on average each year. But NAFTA, Reno said, would make the Mexican economy so much better.

“NAFTA is our best hope for reducing illegal immigration, in the long haul,” she said.

That’s what researchers at the Commission for the Study of International Migration found, and Reno believed it. Mexico’s president even said NAFTA would help his country export “goods, not people.”

But it turns out the policy wonks got it wrong. They didn’t count on stories like Elaine’s. She’s a 22-year-old woman who’s in the U.S. illegally. We’re identifying her by her middle name because she fears deportation.

Her mom’s family grew corn in Morelos, Mexico, back when NAFTA was signed. The trade deal opened up Mexico as a market for U.S. farm products. They poured in, including tons of cheap U.S. corn. It’s yellow corn, largely for animal feed, not for tortillas.

“It was more expensive to grow our own corn than to buy it from the U.S.,” said Elaine.

U.S. corn farmers had their crop prices protected by the U.S. government. That’s on top of other advantages: good soils, ample rainfall and new genetically modified seeds, which boosted yields.

U.S. producers now export about $2 billion a year in corn to Mexico.

Bruce Peterson, a corn producer in Northfield, Minnesota, said he’s not sure how much to credit NAFTA for the expansion of his own farm over the past few decades. But he said it’s clear NAFTA has helped U.S. producers overall.

The farmers in Mexico couldn’t compete against the Midwestern corn giants. Many downsized or folded. Elaine’s mom left her farm family and headed to the U.S. in search of better economic opportunities. She got to America and found a job in fast food.

“Her plan was just to send money back to Mexico so my grandma could raise me,” Elaine said. But her mom missed her. She sent for Elaine, who was just 3 years old, to join her.

“My grandma and I crossed the border,” Elaine said. “We actually went through the desert.”

Like many experts, economist Tim Kehoe at the University of Minnesota thought NAFTA would supercharge Mexico’s economy, so any workers hurt, like corn farmers, would certainly find new jobs. But in the two decades following NAFTA, Mexico’s real per capita GDP only grew at an annual rate of 1.3 percent. And Mexico’s poverty levels have remained about the same.

“Now, when we look at it, that growth miracle did not occur,” said Kehoe, who acted as a consultant on the original trade deal.

Other countries in Latin America with no NAFTA have actually seen better economic growth than Mexico. And Elaine’s family wasn’t alone in seeking opportunities in the U.S. when they failed to find them at home.

Corn sitting in a pile in Randolph, Minn. waits to be loaded onto grain cars, which could carry it as far as Mexico. NAFTA gave U.S. corn producers a big opening to the Mexican market, with corn exports to Mexico now reaching about $2 billion a year.

Kehoe said in the case of corn farmers, NAFTA accelerated the rate of illegal immigration.

Steven Camarota with the conservative Center for Immigration Studies agrees. He noted that NAFTA did create new jobs in Mexico. Many factories sprung up along the border, and folks from rural Mexico did head north for employment in those plants, improving their salaries.

“But once you’ve left home and come right to the border for a somewhat better life, why not then cross the border and quadruple your wages by working in the United States?” he asked. “And that also seems to have happened.”

Experts got a lot wrong about NAFTA back in the ’90s. And Camarota said it’s hard to guess what will happen with immigration if we renegotiate the deal.