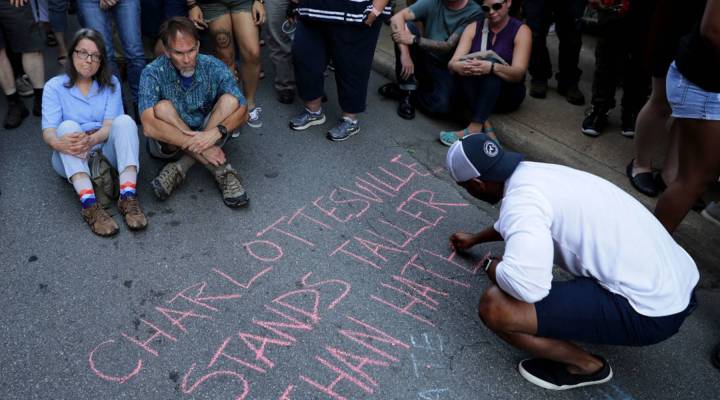 COPY
Hundreds of people gather Sunday for a vigil on the spot where 32-year-old Heather Heyer was killed when a car plowed into a crowd of people protesting against the white supremacist Unite the Right rally in Charlottesville, Virginia. Chip Somodevilla/Getty Images

Hundreds of people gather Sunday for a vigil on the spot where 32-year-old Heather Heyer was killed when a car plowed into a crowd of people protesting against the white supremacist Unite the Right rally in Charlottesville, Virginia. Chip Somodevilla/Getty Images
Listen Now

The violence in Charlottesville, Virginia, this past weekend and the president’s many responses have brought a whole bunch of things in this society and this economy to the surface. One of the big things is America’s issues with race and racism. That can be troubling to think about and sometimes hard to talk about, but it doesn’t mean it’s not an important conversation that’s impacting our culture. Wesley Morris is a culture critic at the New York Times and the co-host of the podcast “Still Processing.” Marketplace host Kai Ryssdal spoke to him about the way race and culture intersect in the aftermath of what happened in Charlottesville. The following is an edited transcript of their conversation.

Morris: Oh, sorry, I mean, what isn’t going on?

Ryssdal: That’s right, some stuff, there’s some stuff going on. So let me tell you why we called you. I was listening to you and Jenna Wortham on “Still Processing” the other day, that’s the podcast that you two do, and you guys came back from vacation because of Charlottesville and because of all the stuff that’s been going on. And you had a good, long, solid conversation about it. And it got me to thinking about how this might manifest itself in the culture, and while acknowledging all the sensitivities about what’s going on, do you think this will show up in our culture?

Morris: I think the spirit of protest is going to show up around a culture. I think that there is a direct effect that protests can have on an unpleasant thing that the protesters find objectionable.

Ryssdal: Well, yeah, but then if you get it back to what happened in Charlottesville and all that that entails, what comes out of those protests and how will we see it? Right? I mean, as you sit down six months from now to write your retrospective culture piece on this, right?

Morris: Yes. I think one thing I would point to is the degree to which people who consume culture kind of don’t want this in their culture, in the first place. I think the reason “Dunkirk” has been such a hit, aside from the fact that it is very well made, is because it is dramatizing a kind of heroism in leadership that I think a lot of people are desperate to experience again. And that is in its way kind of spiritually satisfying. I think we’ll probably get more things like that and than we will “Detroit,” which is a movie that, in its well-meaning-ness, wants to take on an aspect of the moment that we’re currently in, dealing with issues of white supremacy, dealing with issues of systemic racism in the United States. I don’t think people want to see that. I think what they want to see is something more optimistic. They want “Hidden Figures.” They don’t want “Detroit.”

Morris: Yeah. And I also don’t know whether or not the movies or television or — I don’t know. No one is obligated to directly confront this. I actually am more interested in things where it just shows up. For instance, in the case of “The Bachelorette” this summer, one of the big characters on that show was this guy named Lee who is a, he wasn’t officially a racist on the show, but definitely had a thing for this guy, Kenny, one of the black contestants. And he seemed to dog him in this very coded way that read it in racist terms. And as it turns out, he had some tweets that he posted a couple of years ago that basically confirmed what people suspected. But the show turned him into his centerpiece for at least half its run.

Ryssdal: Because of ratings and profit and all of that.

Morris: Yes. Yes. I mean, but they took this deplorable guy, and they made a star of him for as long as he was around on the show.

Ryssdal: So clearly you watch “The Bachelorette,” by the way, I’m just saying.