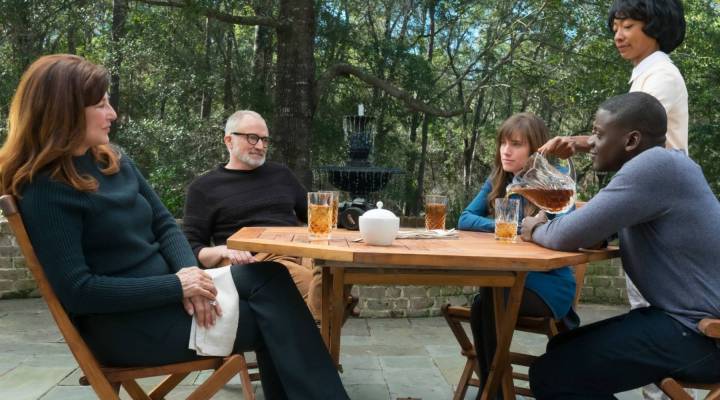 It’s no secret: Jordan Peele’s satirical horror movie “Get Out” is a hit. The movie has made more than $110 million since its premiere, making it the highest-grossing film by a first-time African-American filmmaker. “Get Out’s” success arrives with a slew of other African-American milestones in Hollywood, including “Moonlight’s” Oscar for Best Picture and “Hidden Figure’s” tenacious success in the box office. But how does a psychological thriller turn racism into a monster and make such a smash? Marketplace host Kai Ryssdal spoke again with Wesley Morris, culture critic at the New York Times and co-host of the podcast “Still Processing.” Below is an edited transcript of the interview.

Kai Ryssdal: So we talked three years ago. And I went back and looked it up, and we talked about 2013 having been a good year for black filmmakers and for audiences wanting to see films by, for and with people of color. Are we now at fruition with “Get Out,” and “Hidden Figures,” and “Moonlight,” and all that?

Morris: I mean, we’re somewhere near there. Let’s see where we are in six months from now. I don’t know what else is in the pipeline. I don’t see a lot, but I think what the movie studios know and what they always know but they kind of ignore, which is that a there’s an audience for movies like “Get Out,” and “Hidden Figures,” and to some extent “Moonlight,” which made a lot less money than “Hidden Figures” did. But, I mean, for a movie that cost a million and a half dollars to make, making $25 million is an accomplishment.

Ryssdal: I’m not going to see “Get Out” because it’s a scary movie, and I don’t do scary. But obviously it’s amazing. And the thing I want to ask you about, based on what I’ve read, is a conversation you had with Jordan Peele, the filmmaker, on the podcast you do for the New York Times, you and Jenna Wortham, called “Still Processing.” And you had him on, and he said, “The monster in this film is societal. It’s a social thriller.” Which I thought was a great line.

Morris: Yeah, I mean I think the thing that’s interesting about this movie is there is no monster in it. It is basically just the way we treat each other. I know white people who’ve seen this movie and have been surprised by the way that racism functions in that it’s not the obvious way they’ve been told racism works. The villain isn’t just racism, it’s institutional racism.

Ryssdal: And this is radio, and people might not know you’re a black guy.

Morris: I am an African-American man, yes.

Ryssdal: And I guess my question is, and this is way far afield, but I’m just going to roll with it: Do you get sick and tired of having to have this conversation about the way black people are perceived in this country?

Morris: No. That’s a really good question. You and I talk about it a lot. I talk about it with a lot of the people in my life. I’d rather talk about it than not talk about it. I think one of the problems with the way things have been in this country for a while is that we aren’t really talking about the thing that lots of people of color know is going on, and white people are often catching up with that. One of the heartening things about them about the money this movie has made is, in order to make this kind of money, you kind of need some white people to go. Which means there is a wide audience for this movie and the racism in it is so, so subtle. And the subtlety of the racism is so obvious that I think it is informing a certain white audience about a kind of behavior that they might be participating in and weren’t previously aware of.

Morris: No. I mean, I think it won’t change too much based on the conversation we’re having right now about it. And not you and I, but just the country in general, and I think it’s also really important to say that the odds of this movie doing anything of the Oscars are really low given given the kind of movie it is. But it also is a movie that is immediately in a class with, given its subject, “Rosemary’s Baby,” with “Night of the Living Dead,” with any number of movies that also take on this idea that there isn’t a monster driving people crazy or doing evil things but other people.

Ryssdal: Wesley Morris, who writes on movies and culture and all kinds of stuff from the New York Times. Thanks Wesley. We’ll talk to you soon.