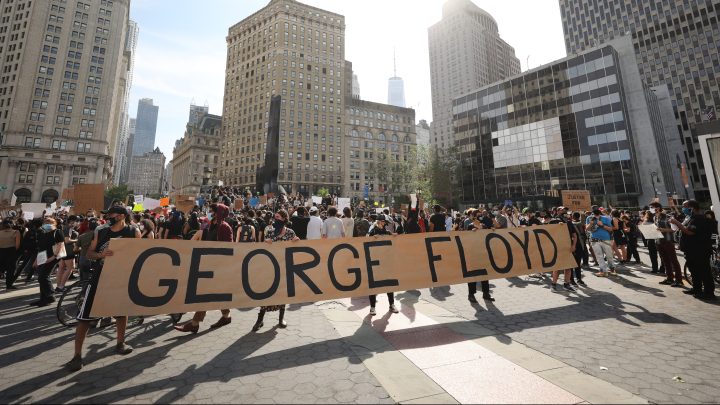 The video showing the death of George Floyd while in the custody of Minneapolis police officers has sparked protests across the world, bringing renewed attention to systemic racism in the United States. Captured on a phone camera, the 10-minute video has inspired people to take to the streets, angry over police brutality and racial injustice.

Wesley Morris, culture critic for the New York Times wrote this week that “the most urgent filmmaking anybody’s doing in this country right now is by Black people with camera phones.” He spoke to “Marketplace” host Kai Ryssdal about these events and how the music of Patti LaBelle is helping him process this American moment. The following is an edited transcript of their conversation.

Ryssdal: Wesley Morris, it has been a very long time.

Morris: I know. Hi. I don’t know why I’m so I’m so happy to talk to you. My excitement is only for you, it is not for anything else happening in this country right now.

Ryssdal: I completely appreciate that and I’m flattered, but I thought to myself the other day as I was watching the news, I’ve got to talk to Wesley. And then you wrote this piece the other day that made me say, we got to get him on the radio now. I want you to tell me about Patti LaBelle.

Morris: OK, so Patti LaBelle. I was home last week on a Sunday doing my normal Sunday stuff. I’ve been listening to all the Patti LaBelle records just because I do that from time to time. I just go through some writer or artist or singer or filmmaker’s stuff and just experience it all. Anyway, I’m there, and the end of her seventh album, it’s called “Patti” and the last song is a live cover of “If You Don’t Know Me by Now.” And she creates her own section of this song where she is just telling this live audience about whether to leave this man. And there’s something about the way she’s phrased it, where you are allowed to hear her talking about somebody bigger than any one person. And there was something about watching that George Floyd video, and having almost a decade of this visual information, and it just hit me. Like this has been going on for the entire history of this country, some version of this, and it persists. And the chorus of the song is “If you don’t know me by now, you will never, never, never know me.” It just sounded like the most profound, deep, eternal assertion of frustration that I had ever heard in that moment.

Ryssdal: There was a line in this piece that you wrote, and you said this: “This country manufacturers only one product powerful enough to interrupt the greatest health and economic crisis it has probably ever faced.”

Morris: Racism. I think that one of the things that’s been frustrating for a lot of people is that this is new to people. This George Floyd video, I mean, I have all kinds of theories as to why it’s this, but people are being passed through something. I’m thinking mostly of white people, especially given who I’m seeing in these protests, they’re on a journey right now. And they’re on a journey to catch up with where lots of other people in this country have been the whole time. And it’s just been fascinating.

Ryssdal: I want to know if you think the journey this time is different?Because it feels different.

Morris: I just heard this on the radio the other day, it was introduced as a group of young white people standing up against racism and injustice. And they were essentially saying amongst themselves the protest chant, “I can’t breathe.” And the way the protest chant typically goes is “I can’t,” and then one person leads it — it’s a call and response. “I can’t,” and then the crowd will respond, “breathe.” And they weren’t doing it the way it’s typically done is what I’ll say. And it was just like, they have gotten the memo, and they’re doing it. I mean, they have been moved to do this. My point is, this wasn’t happening when Eric Garner died. This didn’t happen in Ferguson.

Ryssdal: So, locate this for me culturally, right? Do you think this moment passes or does it endure?

Morris: That’s the question. I felt this way before we were in the streets, although to be clear, I’m not in the protests. I don’t want to get sick, but I support the protest. I’m standing on the sidelines watching. But I think that we have seen too much, between the virus and the protests, against these injustices against Black people. I really believe that that we come out of this differently better. I feel like there are too many angry young people of all races, persuasions, political frames of mind, that are seeing and experiencing the same thing. And it’s bad, and nobody should want it to continue.