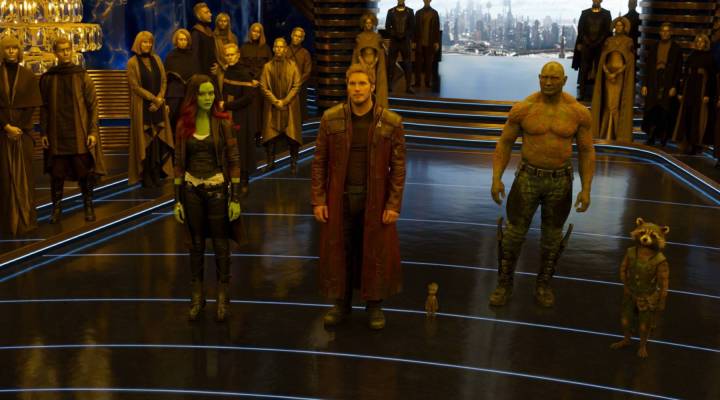 COPY
"Guardians of the Galaxy Vol. 2" is one of the season's tent pole productions. Photo courtesy of Marvel Studios

"Guardians of the Galaxy Vol. 2" is one of the season's tent pole productions. Photo courtesy of Marvel Studios
Listen Now

The new “Alien” movie and the new “Guardians of the Galaxy” are expected to top the box office this weekend, both just the most recent examples of big tent pole productions that suck all the oxygen and money out of the movie-making ecosystem. So, with the summer movie season approaching, host Kai Ryssdal talked with New York Times culture critic Wesley Morris about what to expect in the upcoming summer blockbuster season. The following is an edited transcript of their conversation.

Ryssdal: I want have a little chat about summer box office approaching, as we all know.

Ryssdal: Really. Is that a bad topic for you? I mean, do you not like summer box office?

Ryssdal: Well, all right, OK. I want to know are you looking in any good movies this summer, or is it all going to be boring old tent poles?

Morris: Listen, we’re in tent pole city now. It’s just purely these blockbusters, so there’s very little room between these for anything that isn’t something meant to proliferate unto eternity. Some of these things I’m looking forward to. I’ve seen the trailer for the new “Thor” movie, and I find it extremely exciting.

Ryssdal: But can we just have a non-superhero movie please? Come on, man.

Morris: Well, you know what’s funny is even the things that don’t look like superhero movies wind up being, if not superhero movies or comic book movies, definitely franchises. Every studio really wants to have a franchise, which, of course, is the bad news for Warner Brothers in this “King Arthur: Legend of the Sword” thing. Well, I don’t like the series.

Ryssdal: Well, you knew that was going to be bad going in, and yet they spent I don’t know a gazillion dollars on it.

Ryssdal: My notes here say it took in $14.7 million at theaters last weekend.

Morris: Yeah. No, that is not a franchise amount of money. I think there’s a lesson to be learned, at least for Warner Brothers, in what went wrong with this movie. I think that era is kind of deadsville for things that aren’t “Game of Thrones.”

Ryssdal: So, I was about to jump on studios for never learning a lesson, but can you really fault them for seeing “Game of Thrones” on TV and saying “Oh, yeah, we’ve got to do that. Let’s do something like that.”

Morris: Yeah, but this ain’t “Game of Thrones.” This is basically an action movie premised upon something that you can’t shoot or explode. It just feels out of sync with what people want to see, which is outer space, and Michelle Rodriguez and Vin Diesel driving really fast.

Ryssdal: “Fate of the Furious,” of course. Are we doomed, then? I feel like I’ve asked you this question so many times. I’m not asking, I’m going to state it as a fact. We are doomed to this kind of movie for the foreseeable future.

Morris: Yeah. I mean, the funny thing about calling these seasonal situations is just kind of comical now. I mean, summer starts in February now.

Morris: That movie made, like, $150 million. How are you “outing yourself?”

Ryssdal: No, because here’s why, right? I mean, look, people look at it and go, “Oh c’mon, it’s a stupid little musical about Los Angeles. Who cares.” This was back when it was first coming out, right? And I loved it.

Morris: Now listen, you are not going to get me to say anything bad about “La La Land.” It is a good enough movie to not be worth pointing to as indicative of anything other than things that the movies should be doing more of.

Morris: But I think as a counterpoint, I would point to a movie like “Snatched,” right? Which is Amy Schumer and the legend Goldie Hawn. But I think that’s a movie that is nominally a comedy. It is basically an action movie, and it is officially not a franchise movie. I mean, it is just a big, dumb comedy.

Morris: I don’t think so. I don’t think it made enough money. And I also think that — “Snatched 2?” Oh, boy. I mean, the movie is bad, and I think enough people who saw it this weekend probably agree with me.