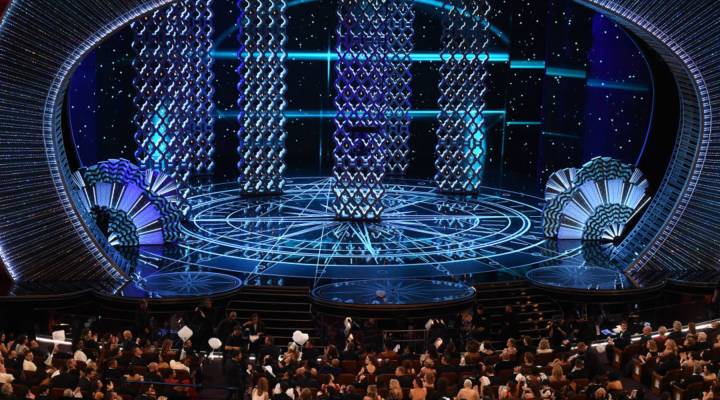 COPY
A view of the stage during the 89th Annual Academy Awards at Hollywood & Highland Center on February 26, 2017 in Hollywood, California. Kevin Winter/Getty Images

A view of the stage during the 89th Annual Academy Awards at Hollywood & Highland Center on February 26, 2017 in Hollywood, California. Kevin Winter/Getty Images
Listen Now

Last night’s Oscar show had some upsets — even without that envelope snafu. Marketplace host Kai Ryssdal talked with New York Times culture critic Wesley Morris about what just happened at the Oscars and why even movies are more polarizing than they used to be. Below is an edited transcript of their conversation.

Kai Ryssdal: All right, so cast your mind back, and I want you to clear your brain of everything you have discovered since that envelope was opened, when you heard “La La Land” as best picture, what was your first thought?

Wesley Morris: “Of course.” It was “Of course.” I was not surprised. As a professional moviegoer, you get used to certain results recurring with a few surprises here or there. It just seemed kind of inevitable that “La La Land” was going to be best picture. So you know when Faye Dunaway said “La La Land” in the way that she said it, it just seemed like “of course.”

Morris:  Oh, sure! It’s great. There’s no downside to “Moonlight” winning best picture at all. I do think there will be a lot of people in various parts of the country who will be, like, “What is that?” But I think that’s more an indication of how fractured the moviegoing situation is right now. I mean, under no circumstances was “Moonlight” ever supposed to conquer the box office. It’s made about $22 million at this point. And that’s a lot of money for a movie that is about the life of one person who is a gay, black male from a housing project in Miami.

Ryssdal: Back up for a minute. What do you mean that the moviegoing thing is so fractured now?

Ryssdal: You mean all of us as a society.

Morris:  Yeah. I just feel like last night there was a “Manchester by the Sea” constituency, there was a “Hacksaw Ridge” constituency, there were the “La La Land” people, and there was probably — I’m going to guess, and I’m just going to challenge someone to disprove this — I don’t think there’s a great deal of overlap among those nine movies in terms of audience. But I think that there is a way in which your identity politics and your sort of “this thing we’re going through” where we have to sort of partisan-ize so many things does create these blocs.

Ryssdal: The finale aside and that whole brouhaha, was last night a good night for the motion picture industry in this country?

Morris: I think because of that brouhaha. You know, I think going into the show, the conversation was about the representation issue. This year, there were clearly people of color nominated, several of them won. I think that took a lot of the pressure off the body of the Academy. But, I mean, as you and I have talked about before, that’s not really the issue. I mean, it’s not the Academy’s problem, it’s the movies’ problem.

Ryssdal: Wesley Morris. He writes on movies and culture and a bunch stuff for the New York Times. Thanks man, we’ll talk soon.

Morris: Thank you. I’ll talk to you later.